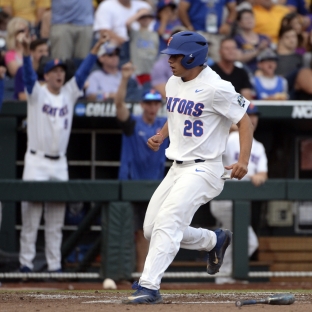 For the first time in program history, the Florida Gators are College World Series champions.

For the second straight night, the Gators held on in a nail-biter over conference rival LSU — though the final score might not reflect the close nature of the Tuesday night contest.

Florida survived first-and-third, no-out threats in both the seventh and eighth innings while clinging to a 2-1 lead. Those Houdini acts allowed the Gators time to finally break through against the Tigers bullpen, scoring four times to put away the Tigers 6-1.

Tyler Dyson gave coach Kevin O’Sullivan six strong innings, keeping up the theme of tremendous starting pitching that helped win the trophy, while Jackson Kowar came out of the bullpen to get out of a jam in the eighth and pick up the save.

Scroll through below for a recap of all the quotes and action from the Gators’ historic week in Omaha.