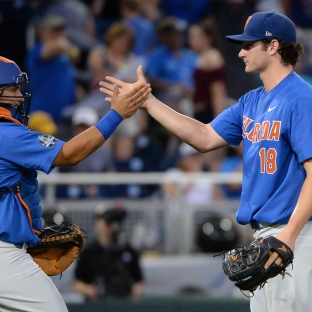 OMAHA, Neb. — The Gators are exactly where they want to be in the College World Series.

Florida needs one win to advance to the championship series and they have two opportunities to get it, starting Friday night against TCU. The Gators opened the CWS with a 3-0 win over the Horned Frogs on Sunday. If Florida loses, the teams will play again on Saturday for a berth in the best-of-three championship series.

Sophomore starter Jackson Kowar (12-0, 4.00 ERA) is scheduled to make his first career start in Omaha. Kowar is coming off his shortest outing of the season (4 2/3 IP, 10 H, 5 R) against Wake Forest in the Gainesville Super Regional. He’ll look to rebound against a TCU team led by catcher Evan Skoug, who went 0-for-4 with three strikeouts in Sunday’s loss to the Gators.

Meanwhile, Horned Frogs coach Jim Schlossnagle said after Thursday’s 4-3 win over Louisville that 6-foot-7 redshirt senior Mitchell Traver (4-1, 3.79 ERA) will make his 12th start of the season. Traver has pitched only 40 1/3 innings this season with 48 strikeouts.

Take a closer look at the Gators-Horned Frogs matchup:

In Omaha: The Gators have won behind their starting pitching in the first two games in Omaha, as starters Alex Faedo and Brady Singer led the Gators to wins over TCU and Louisville. Florida is off to a 2-0 start in the CWS for only the third time in 11 all-time trips to the CWS. The other two times — 2005 and 2011 — Florida advanced to the championships series.

Player to Watch: JJ Schwarz is just 1-for-8 in the CWS but as Gator fans know, Schwarz often rises to the occasion in the biggest moments. Schwarz’s primary contribution in the first two games is an RBI groundout to plate Florida’s first run in Sunday’s 3-0 win over TCU. Schwarz is capable of changing the momentum with each swing of the bat.

Gators can win if … Starter Jackson Kowar can come close to matching the performances of Faedo and Singer in the first two games. Kowar is not the power pitcher those two are, but he has been steady and relies heavily on his above-average changeup. If Kowar can give the Gators six solid innings before needing help from the bullpen, Florida should be in good shape.

#OmahaGators will face TCU again on Friday (8 pm ET, @ESPN) with a chance to advance to the #CWS Championship Series. https://t.co/hD3mOAxcXx

In Omaha: The Horned Frogs opened by losing 3-0 to Florida to drop into the losers bracket. However, TCU eliminated Texas A&M with a 4-1 win on Tuesday and on Thursday night stayed alive by eliminating Louisville, 4-3, behind 4 1/3 scoreless innings from reliever Sean Wymer. Wymer entered the game with two on and two out in the fifth with TCU clinging to a 4-3 lead. He struck out National Player of the Year Brendan McKay on three pitches to end the threat and cruised from there, striking out five Cardinals with the season on the line

Player to Watch: TCU senior shortstop Ryan Merrill homered in Tuesday’s win over Texas A&M and had a two-run single in Thursday’s win over Louisville. An Omaha native, Merrill has provided the hometown fans a couple of memorable moments and has proven he is capable of making a difference at the bottom of TCU’s order.

Horned Frogs can win if … They continue to show the resiliency they showed by staving off elimination with their wins over Texas A&M and Louisville. The Horned Frogs made the plays, got the breaks and took advantage of their scoring opportunities when they had to. If they get an early lead against Kowar and fifth-year senior starter Mitchell Traver is on, a third meeting between the two teams could be on tap Saturday.