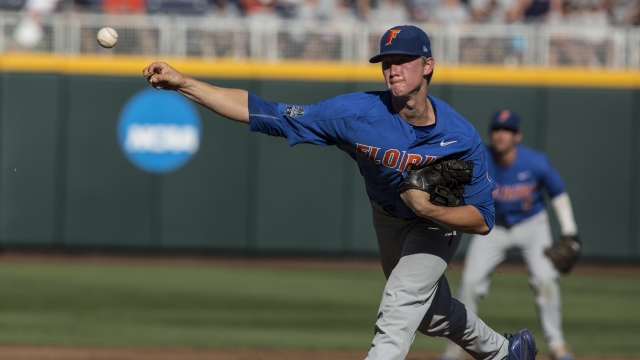 OMAHA, Neb. — For the third time in College World Series history, two SEC teams will square off for the national championship when familiar foes Florida and LSU take the field Monday.

The Tigers go for their seventh national title in school history after beating No. 1 overall seed Oregon State two days in a row, just days after a crushing 13-1 defeat to the Beavers. The Gators seek their first trophy in their 11th all-time trip to Omaha, advancing to the finals for the third time behind stellar pitching against TCU Saturday night.

The #CWS Finals are set!

Familiarity will be a focus in the best-of-three set as the co-SEC regular season champs meet at the sport’s grandest stage. However, both teams say they are significantly different than the versions that took the field in Gainesville back on March 24-26 in their last head-to-head meetings.

“I’ve always said it’s not who you play in your league, it’s when you play them. Because we all go through ups and downs,” Florida coach Kevin O’Sullivan said. “And that weekend has absolutely no bearing on what is going to happen here in the next few days.”

Since then, both programs have found a new shutdown closer — Florida’s Michael Byrne (nation-leading 18 saves) and LSU’s Zack Hess (program-record three CWS saves set in a single CWS) were both pushed into the late-inning role midway through the year — and have gotten healthier down the stretch.

One steady trend from both teams all year has been consistent starting pitching.

For Florida, starters Alex Faedo, Brady Singer and Jackson Kowar have combined to give up just five earned runs in 26.1 innings pitched (four starts) so far in Omaha. Faedo tossed two seven-inning 11-strikeout shutouts against TCU last week, including the clincher on Saturday night to book the Gators’ trip to the finals.

O’Sullivan said he’s not sure if Faedo will be available out of the bullpen on short rest for Game 2 or a possible Game 3. But he named Brady Singer Monday’s Game 1 starter and Kowar the Game 3 starter, if a final meeting is necessary.

Singer limited Louisville to one run over seven innings in his one start so far in Omaha. Back on March 25, the sophomore righty (8-5; 3.18 ERA) tossed a complete game six-hitter against the Tigers. In Sunday’s press conference, Singer said pitching to contact against LSU was a key in finishing the well-pitched game.

Brady Singer is 1-0 in the CWS and had success in March against LSU.

“I think I kept my pitch count down the whole game, just kept it slow. Obviously they can hit the ball a little bit,” Singer said. “So [I] kept the ball low and threw to both sides of the plate and had the slider and changeup working. And honestly just pitched to my strengths. Got a lot of ground balls, and that’s about it.

O’Sullivan said his Game 2 starter is yet to be decided, but said Tyler Dyson and Byrne are two viable options. Byrne hasn’t started a game since taking over the closer’s role in early April, but said he’d be ready if the call is made.

“I’m up for the challenge,” Byrne said. “Whatever they ask me to do this week, I’ll do. I’m not worried.”

LSU will counter with senior Russell Reynolds in Game 1, followed by its top two arms on Tuesday and Wednesday. Reynolds has given up 14 runs in 14.2 innings pitched this year and will make his first start since 2015. Jared Poche’, who picked up his program-record 39th career victory last time out against Florida State, will go in Game 2 while Alex Lange would take the mound in the if necessary Game 3 on normal rest.

Poche’ is 2-0 this CWS in two appearances (one start, one relief appearance). The lefty senior said ending his career in Omaha is a dream come true.

On offense, both teams have struggled to score runs at times — LSU averages 4.4 per game; Florida averages 3.25 ­— which Florida outfielder Nelson Maldonado said should result in “grind it out games.”

The Gators have won a nation-high 18 one-run games this year while LSU has nine of its own.

“It’s going to be an SEC showdown [against LSU],” Maldonado said. “We have to grind out every single at bat and they’re going to have to make quality pitches.”