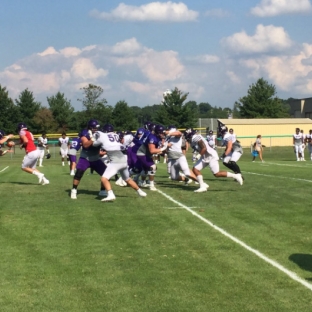 MACOMB, Ill. – Charlie Fisher only had to look at the numbers from last season.

RELATED: The 10 best FCS uniforms, according to fans

The Leathernecks were 6-2 late in the season and poised to make a second consecutive appearance in the FCS playoffs before a three-game losing streak took them out.

“We have to execute better,” Fisher said. “We didn’t execute well in the last three games. We were in position. But you’ve got to finish. It’s more than just a mentality, you just have to play better.

Fisher knew the collapse was a collective effort on both sides of the ball.

But he knew the numbers of the defense. The best way to improve those numbers was to have a defense that could create problems.

The answer was a shift from a 4-3 defense to the 3-4, taking advantage of the Leathernecks’ speed as well as their deep linebacker group.

“It’s not a magic formula, just saying ‘3-4.’ You have to have good players who can execute the scheme. It’s a different look.”

“It gives me a headache sometimes,” McGuire said.

That’s exactly what Fisher wants opponents to feel this season.

Linebacker Quentin Moon liked the change, because he played the defense before when he was in high school.

“Getting back to a 3-4 is kind of a relief,” Moon said. “It’s a big step toward allowing your players to be more versatile, more flexible. Allowing the best 11 to play at long times. I adapted to it. I liked it.”

Defensive lineman Khalen Saunders had never played in it before, but he embraced the change.

“Growing up, middle school, high school, I played a certain defense, a 4-3,” Saunders said., “When we switched around, I had no issues with it. I know Coach is going to bring in what is good for our team.

“I’m not going to leave. I’m going to adapt to whatever Coach gives to us.”

“It was,” linebacker Brett Taylor said, “a little bit different.”

Taylor, an All-American, led the Leathernecks with 134 tackles last season. Moon was second with 88. Riggs Baxter was fifth with 52. Pete Swenson was seventh with 43.

That’s why the Leathernecks are playing a 3-4.

“A lot of the defense is funneled around those guys making a lot of plays, a lot of tackles,” said new defensive coordinator Tony Grantham, who was brought in to shape this new look.

“You make the quarterback and the offensive line try to determine who the fourth rusher is post-snap, with potentially a fifth and maybe a sixth rusher,” Grantham said. “It’s good from that standpoint – we try to make the quarterback make as many post-snap decisions as he can during the course of the game.

“The three down guys, you know they’re involved in the rush. Now, where’s that fourth guy going to come from? Is he coming from the outside, is he coming from the inside? It does give some different looks you’re able to do. And with the spread offenses, and people trying to spread you out, you’re able to get a more athletic guy on the field, guys that can cover in space, tackle in space, do those kinds of things.”

“At the end of the day, you look at how much havoc a defense can create – tackles for losses, sacks,” Fisher said. “Those were two areas we weren’t very good in last year.

“The 3-4 balances you off, it allows you to come from both sides.”

The anchor is Taylor, one of the best defensive players in FCS play. At inside linebacker, Taylor is responsible for setting the assignments.

“When you’ve got a guy who is smart and can play any role, that helps us,” Saunders said. “The faster he gets us lined up and makes the call, that gets us playing faster.”

“That position is probably the hardest in the defense,” Grantham said. “They have to make the calls, they have to make the checks. They’re really the quarterback. There are so many variables that go one side or the other, that they’re the swing guy. He is a student of the game. He works, he studies.

“His success speaks for itself.”

Monday night under the lights at Hanson for the Defense #TRADITIONofTOUGH pic.twitter.com/BCyRPyuRAl

Taylor shrugged off his importance.

“We’re all helping each other out,” he said.

The one thing Taylor stressed is how, with 10 starters back from last season, everyone has the experience and the knowledge of the players around them.

“We’ve literally got everybody back,” Saunders said. “That definitely made the adjustment work.”

“They have a lot of football intelligence,” Grantham said. “They’re smart guys. They pick up on things. You can change gears with them a little bit.

“We can kind of jump in and out of things, and it’s not foreign to them.”

The 3-4, Grantham said, plays into the Leathernecks’ strength.

“It’s easier to find linebackers than it is to find big people (for the defensive line),” Grantham said. “There are only so many big people walking the earth. Everybody wants them. So you have to do something that is a little bit of a niche, something different. It’s easier to find those linebacker guys who can play in space. Now they have to hold up in the run game, but you have to be able to find those guys. They’re spreading you out from sideline to sideline more. “People are trying to get the ball on the perimeter, make space plays everywhere. Offenses are so good, with the 7-on-7s, the passing camps, the quarterbacks, the wideouts. You have to do something to make that guy uncomfortable, make decisions post-snap. If he just looks back and reads the coverage, they’re going to be better executing (the offense) and you can’t cover it the way it is. That’s a big part of what we do.”

McGuire remembered what it was like in the spring, when the Leathernecks’ offense had to go against the new defense.

“A lot of missed IDs by the O-lines,” Saunders said.

Grantham said there will be a variety of looks.

“We’re trying to get our best 11 on the field for each down and distance,” he said. “If you play a heavy run team, you play one package. If you play a heavy pass team, it’s a little different. That’s that fine line you have to walk sometimes. The more versatility we have, the more creativity we can have.”

“Even though we’re learning a new defense, we’re not learning how to play football,” Saunders said. “It’s football, it’s just a different way to play it.”

Fisher figures he has found the answer.

This article is written by John Bohnenkamp from The Hawk Eye, Burlington, Iowa and was legally licensed via the Tribune Content Agency through the NewsCred publisher network. Please direct all licensing questions to legal@newscred.com.