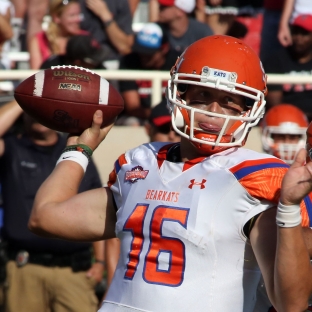 Even more precise, many familiar names.

Eighteen of the 22 players were nominees for the outstanding offensive player of the year in the FCS last season, including 14 finalists and led by the recipient, Jeremiah Briscoe of Sam Houston State. This year, the record-setting quarterback will attempt to become the second two-time winner of the 31-year-old award, joining Appalachian State’s Armanti Edwards in 2008 and 2009.

The Payton Award, first handed out in 1987, has had past winners such as Steve McNair, Tony Romo, Brian Westbrook, John Friesz, Brian Finneran, Jimmy Garoppolo and Cooper Kupp move on to the NFL.

The watch list will have updates during the season. A national panel of over 150 sports information and media relations directors, broadcasters, writers and other dignitaries will vote on 25 finalists following the regular season.

Briscoe has all of his leading receivers back this season, but he will be challenged to win another Payton Award by the standout group of nominees. Included are Eastern Washington quarterback Gage Gubrud, the third-place finisher last year, and Fordham running back Chase Edmonds, who was fourth.

COLLEGE FOOTBALL: 50 storylines and questions for the 2017 college football season

The breakdown of the watch list by position: 10 quarterbacks, five wide receivers, four running backs, one fullback, one tight end and one offensive tackle. The Big Sky Conference had the most nominees with four, while CAA Football and the Missouri Valley Football Conference had three each.