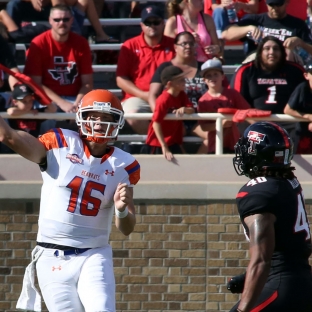 In many parts of the college football world, it is known as “Week 0.” And it’s just around the corner.

The FCS schedule ramps up next week in earnest, with a ton of games Thursday and Saturday. But the first handful of FCS games are scheduled this weekend, highlighted by a Top 10 matchup between No. 7 Richmond and No. 3 Sam Houston State.

For educational purposes, we’ve taken a look at the four most intriguing matchups of this weekend:

The inaugural matchup of the 2017 season is a nice warmup for the rest of the weekend. Game 1 features a pair of teams hoping for a step forward this year. Both finished 4-7 last year.

For Texas Southern, the idea is that cohesiveness will breed success. The Tigers return a ton of key skill players, including sophomore running back Brad Woodard, senior quarterback Averion Hurts and senior Austin Watts, all leaders at their respective positions.

Florida A&M will hope for something of the same. Freshman Ryan Stanley took over the Rattlers’ offense last fall, piloting them to a 4-3 record down the stretch after a brutal beginning. If Stanley can continue to grow, 2017 could be a year for improvement.

Our first Top 25 matchup of the season features two teams that spent 2016 scoring a lot of points but enter 2017 with plenty of question marks.

Jacksonville State averaged nearly 31 points per game last year, but it lost its top two rushers in quarterback Eli Jenkins and running back Josh Clemons, who combined for 1,988 yards and 23 touchdowns. Whether the Gamecocks can bounce back from those losses remains to be seen; they retain running back Roc Thomas from a year ago, but Bryant Horn, a former linebacker who has seven career pass attempts, is the man at quarterback.

Two weeks!! Can’t wait to see you all there. pic.twitter.com/2j4JsaXJTS

On the Chattanooga sideline, senior quarterback Alejandro Bennifield returns to the fold after a year in which he completed better than 64 percent of his passes and threw 26 touchdowns to just seven interceptions. Bennifield, however, has lost his top two targets from last year, and no returning Mocs wideout had more than 375 yards in receptions last season. Can Bennifield and running back Richardre Bagley keep the Mocs’ offense afloat this year?

Cal Poly’s leading running back, Joe Prothero, returns after piling up 1,339 yards and 13 touchdowns, but its Nos. 2 and 3, Kori Garcia and Dano Graves, have graduated. Will the Mustangs be able to keep their run of staggering rushing attacks going for another year?

On the other side, Colgate lost its starting quarterback and leading rusher, Jake Melville, to graduation, which explains their lack of a current ranking. But the Raiders are returning senior running back Keyon Washington and senior wide receiver Alex Greenawalt, and they received five points in the preseason poll. They could be a threat.

MORE: Get to know Fordham’s Chase Edmonds, one of the best running backs in the country

This is Week 0’s premier matchup, in prime time on Sunday night.

Sam Houston State finished last year with a 12-1 record, its only loss coming in a brutal 65-7 smackdown at the hands of James Madison in the playoffs. That loss probably didn’t sit well with reigning Walter Payton Award winner and senior quarterback Jeremiah Briscoe, who threw for 57 touchdowns last year and averaged 354 passing yards a game. Sam Houston State returns its top three receivers, a big reason the Bearkats are ranked No. 3 in the country.

Of course, No. 7 Richmond is no afterthought. The Spiders finished last season with a 10-4 record, and they return sophomore running back Deontez Thompson (1,053 yards and nine touchdowns as a freshman) and senior quarterback Kyle Lauletta (3,022 yards and 24 touchdowns in 2016). Also for Richmond, underrated junior kicker Griffin Trau returns. He was good on 23 of his 26 field goal tries last year, including all 13 from 30-39 yards.