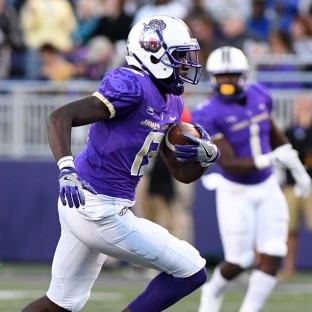 Another week of FCS action brought another FCS Coaches Poll in which the top teams held their positions in the top 25. The first four teams – James Madison, North Dakota State, Sam Houston State and South Dakota State – maintained their spot in the rankings, collectively outscoring their Week 2 opponents 167-81. Nine of the top-10 squads were also ranked in the top 10 last week. Overall, the teams ranked in last week’s FCS Coaches Poll went 16-7 in Week 2.

The Eagles dropped more than any other team in the poll – from T-No. 6 to No. 12 – as they fell to 0-2 this season after a Week 1 loss to Texas Tech. The disparity in the rushing attacks for North Dakota State and Eastern Washington proved to be the difference. The Bison rushed for 375 yards and five touchdowns to the Eagles’ 70 yards and one score on the ground. North Dakota State’s Bruce Anderson (160 yards, one touchdown) and Lance Dunn (148 yards, three touchdowns) both individually out-rushed Eastern Washington as a team.

The only other winless teams in the top 25 are No. 15 Chattanooga (0-2), which lost 45-10 to LSU last week after a Week 1 loss to Jacksonville State, and No. 19 Charleston Southern (0-1), which lost to Mississippi State in Week 1 before its Week 2 matchup against South Carolina State was canceled.

There are two big dropoffs in point totals in the Week 2 Coaches Poll, between No. 4 and No. 5, and No. 5 and No. 6. Fourth-ranked South Dakota State received 574 points – just 74 points behind No. 1 James Madison – while No. 5 Youngstown State received 515 points, good for a 59-point difference. Richmond and Jacksonville State, which are tied for No. 6, received 455 points each – 60 points less than the Penguins – showing a clear hierarchy in who the FCS voters believe the top-four, and fifth-best, teams are in the sport.

The biggest risers in the latest FCS Coaches Poll improved just three spots. T-No. 6 Richmond (1-1) improved from No. 9 after a 20-17 win against Colgate and Northern Iowa jumped from T-No. 21 to No. 18 following a 45-38 overtime win over Cal Poly.

Elsewhere in the top 10, No. 5 Youngstown State improved one spot in the rankings after shutting out Robert Morris 30-0 and No. 10 North Dakota handled Missouri State, 34-0, resulting in a one-spot jump in the poll.

The back end of the top 25 has remained a revolving door, as new teams have entered the poll and losses pushed others out of the rankings. No. 22 Western Illinois used a 38-20 win against Northern Arizona to jump into the top 25 and No. 23 South Dakota cracked the rankings after after a 35-27 win against Bowling Green.