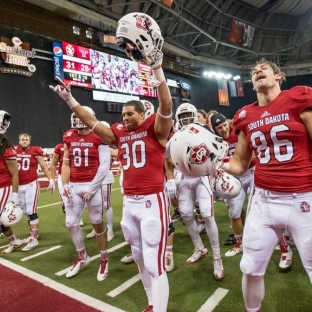 After six weeks, there’s little debate as to the two best teams in FCS. James Madison and North Dakota State, both undefeated through five games apiece, have been the top squads in the country since the season began. The Dukes have been so dominant that their upcoming matchup with No. 14 Villanova is drawing ESPN’s College GameDay to Harrisonburg.

But behind those two, this past weekend’s action shook up the Top 10, and the rankings writ large, quite a bit. Wofford was the only other team in the country whose rank went unchanged.

In big news, former No. 3 Youngstown State and former No. 7 Illinois State both saw big drops after their respective losses. The Penguins’ loss to No. 4 South Dakota moved them down to No. 8, while the Redbirds’ three-touchdown loss to Northern Arizona fueled their drop to No. 15.

On the flip side of Youngstown State’s fall, South Dakota saw a two-spot bump in the rankings thanks to their win in the showdown, shooting up to No. 4, the school’s highest ranking in 30 years. Meanwhile, Northern Arizona’s win over Illinois State helped the Lumberjacks join the fray at No. 24 after receiving votes last week.

7 seconds on the clock. pic.twitter.com/dNOnHjrUS3

The biggest riser of the week is Elon, whose 25-17 win over William & Mary was good enough for a three-spot bump, up from No. 23 to No. 20. The Phoenix’s 5-1 record, in a CAA conference swimming with talent, certainly also helped their cause.

How about the biggest falls in the rankings? We’ve already touched on the biggest one, Illinois State’s eight-slot drop, as well as Youngstown State’s five-spot fall. The Citadel also dropped five spots, from No. 17 to No. 22, after dropping a 24-14 contest to Mercer, the Bulldogs’ second straight loss after a 3-0 start.

Training our eyes towards the bottom of the poll, two squads joined the Top 25 this week after receiving votes last week. Northern Arizona, of course, leapt up to No. 24, and Western Carolina’s solid showing — forcing No. 5 Wofford to overtime — helped springboard the Catamounts to the final spot in this week’s poll at No. 25.

Of course, two teams joining the Top 25 means two teams also exited. This week, those teams are former No. 24 Stony Brook, after a 24-20 loss to Delaware, and former No. 21 Northern Iowa, who fell to 2-3 after losing to No. 17 Western Illinois in dramatic fashion.

It’s official. @CollegeGameDay is coming back to #JMU. See you on the 14th. #GoDukes pic.twitter.com/KXSzScHyAK

The best game this weekend is, most likely, No. 1 James Madison hosting No. 14 Villanova. With the College GameDay crew on hand the scene will be tremendous, and the Dukes rarely disappoint.

Elsewhere, No. 2 North Dakota State puts its undefeated record on the line at No. 8 Youngstown State; No. 22 The Citadel will be hosting No. 5 Wofford in a very good SoCon matchup; and No. 12 New Hampshire travels to Stony Brook, who received votes this week.