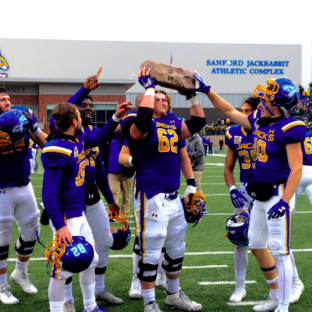 No. 1 James Madison (9-0) once again received all 26 first-place votes after the Dukes routed Rhode Island 38-3 for their 21st consecutive win. Their last loss was a 56-28 defeat on the road against North Carolina in September 2016. Before that? A 44-38 loss to Colgate in the 2015 FCS playoffs. With the way the Dukes have played this season, there’s a realistic possibility their next loss won’t come until at least 2018.

Handled our business on the road. Great effort to bring home the W and stay unbeaten in #CAAFB play! #GoDukes #DefendTheCrown pic.twitter.com/3FhO1IrGgY

The rest of the top 10 experienced some significant changes as North Dakota State (8-1) and South Dakota (7-2) both fell four spots to No. 6 and No. 10, respectively.

With the Bison’s loss – their first since the FCS Semifinals against JMU last winter – Jacksonville State (8-1), Central Arkansas (8-1) and Sam Houston State (8-1) each slid one spot higher in the rankings, where they’re now second, third, and fourth, respectively.

Each team won its last game in blowout fashion. Jacksonville State defeated Murray State 59-23 behind a collective rushing effort that saw the Gamecocks run the ball 45 times for 323 yards and five scores. Central Arkansas downed Lamar 42-14 behind an even more run-heavy attack – to the tune of 58 attempts for 332 yards and four touchdowns as four players rushed for at least 50 yards. Sam Houston State throttled Incarnate Word 57-20 as quarterback Jeremiah Briscoe threw for 399 yards and four touchdowns.

South Dakota State (7-2) used its 33-21 win over North Dakota State to climb to No. 5, one spot ahead of the Bison. Along with James Madison, North Carolina A&T (9-0) is now the only other unbeaten team at the FCS level. The Aggies check in at No. 7 this week after a 35-7 win over Norfolk State.

Six teams improved their ranking in the FCS Coaches Poll by at least three spots. The biggest risers of the week are Stony Brook (six spots – No. 21 to No. 15) and Western Illinois (five spots – No. 18 to No. 13).

A pair of teams that entered the weekend ranked just outside the top 10 plummeted after losing in Week 10.

Let’s take another look at the biggest games left on the schedule. For the second week in a row, all eyes will be on the Dakotas, as either North Dakota State or South Dakota will suffer its second straight loss. Looking ahead at Week 12, there’s a major clash in the Colonial Athletic Association as No. 1 James Madison plays No. 9 Elon, as well as a battle for state supremacy between South Dakota and South Dakota State.

No. 5 South Dakota State vs. No. 20 Illinois State