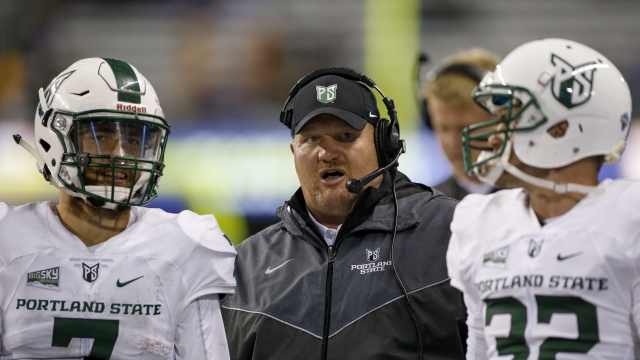 FCS: How Portland State wins by hitting the road to play the big guys

Football practice was over at Portland State, and the players spread out, laying on the turf, wearing dark glasses, eyes to the sky. Any film study session could wait — there was a solar eclipse to watch.

“They saw something else besides the classroom and the football field.”

Eclipses? Visits to Alcatraz in San Francisco and Temple Square in Salt Lake City? Is this pulled from a travel agency brochure?

Welcome to Barnyball, the Americana Tour. That’s what Barnum calls his strategy when his Vikings are off to away games.

There are some things we need to know about Bruce Barnum. He’d rather bus than fly to an opponent’s place any ol’ day. And he wants his players to experience something besides a football game.

“They expect it every time we travel. They go to school for education, that’s my philosophy,” he said. “My dad was in the service. Five years were the longest we ever stayed anywhere. My mom and dad would load my brother and I in that Buick LeSabre, and we’d start driving. Whether it was the Black Hills in South Dakota or Booger Hollow in Arkansas or the biggest ball of twine, he was always showing us something.”

In his first two seasons at Portland State, Barnum’s team put in 9,300 bus miles. That’s a lot of interstate passing by the window. Still, there was time for a Las Vegas show, a stop to see Wildlife Safari in Oregon and a tour of Alcatraz in San Francisco, which would have been a perfect visit had the equipment manager not accidentally been left behind.

When the Vikings upset Washington State in 2015, Barnum figured his team had karma on its side. So on the bus ride back, he pulled into a truck stop to buy a lottery ticket.

He won the game, but not the lottery.

FCS: Fordham’s Chase Edmonds is the best running back you don’t know enough about

More than simple wanderlust is at work here. Bussing helps the athletic budget, to be sure. This is FCS, not Alabama. And Barnum strongly believes sequestering his players on the same bus for hours on end can be a vitamin shot for team chemistry.

“Here’s what happened on the bus,” he said, talking about his first season in 2015. “It started out, this team doesn’t like each other, so let’s make them sit next to one another. The best thing that happened that first year, we went to Pullman, I had to lie to the kids. I put water in front of the plugs they used for charging, and about halfway into the trip, their cell phones ran out. All of sudden they started talking to each other, ‘Hey, where you from?’ Then I saw cards break out, then guys were playing dominoes on the floor.

“They got mad at me, because next trip they discovered the plugs, but by that time, they’d gotten to know each other. We took a trip to Eastern Washington, it was only about 5 ½ hours. When we got to the field, they were like, ‘Are you kidding me, we’re already here?’ They were disappointed we got there so quick.”

The miles worked their magic. Portland State went from 3-9 in 2014 to 9-3, and Barnum was national coach of the year. Injuries and youth led to a 3-8 record last season.

And this year’s road schedule? More miles, and a big bite of FBS football at the beginning. The Vikings head for BYU this Saturday — alas, by air — and then take the short hop to Oregon State the following Saturday. That’s a lot of heavy lifting in eight days.

“If you look at it, the tote boards Vegas likes, I’m going to start out 0-2,” Barnum said. But being optimistic is the only way he knows.  “It’s a mindset with my student-athletes, win or lose, I make sure we don’t lose those games before we get there. That’s how we approach them.

“The first year we had no injuries and won two FBS games (including the 24-17 shocker at Washington State). Last year, [players]were dropping like flies. That’s why we ended up starting seven freshmen. When that happens, it’s counter-productive. It sets up the rest of your year for failure.”

Later this season, Portland State will take trips to Idaho State and Eastern Washington. The first will be at least 10 hours on a bus one way, the other nearly six. The Americana Tour itinerary is still in the works. Last time the Vikings went to Idaho State, Barnum took them by Boise State, so they could practice on the famous blue turf. A return is not likely.

“They charged me. I got a bill a few weeks later. I’m like, ‘Are you kidding me? You’re going to charge my program $300 or whatever to walk out on the field for 30 minutes?’ So we’re not going to practice at Boise State, I know that.

“I’m going to have to figure something out. They haven’t seen the Snake River Canyon. The ramp right there where Evel Knievel jumped, his ramp is still there. We might show them that. Then go on down to Pocatello and whip them. That’s the plan right now.”

Eastern Washington?  Barnum knows a guy with a barbecue restaurant. “He sets up tents, we pull our buses up there, he’s got enough barbecue to feed the White House and everybody complaining at it. He loads us up with barbecue. We’ll probably have a little Lewis & Clark scenario going on there.”

But before all that, BYU and Oregon State. A tough way to start a season. But the checks will be nice for the athletic department budget.

MORE: 6 potential FCS over FBS upsets to watch out for in 2017

Barnum wouldn’t have minded busing back the 12 hours from BYU, but the charter rates were nearly as expensive as flying, so Barnyball will be going by air this first week.  Meanwhile, someone had a marketing idea for the Americana Tour.

Barnum is enthused about so many things. This one, not so much.

“They wanted to paint my face on the side of a bus,” the coach said. “I said no way in Hell.”