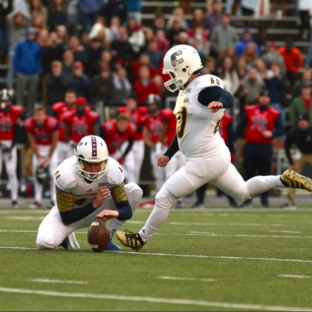 There’s no such thing in the world of FCS football. As always, the FCS kept its best teams on their toes. Here’s everything that happened:

1. Taryn Christion and the Jackrabbit offense fired on all cylinders

After posting 62 points the week before, No. 9 South Dakota State kept the wheels churning Saturday against No. 14 Western Illinois. Both offenses came out firing: The Jackrabbits led by quarterback Taryn Christion, the Leathernecks led by all-purpose back Steve McShane who rushed for two touchdowns. South Dakota State led at half 24-17 thanks to three Christion passing touchdowns, two to receiver Jake Wieneke.

Christion would not take his foot off the gas as he fired a 46-yard touchdown to Marquise Lewis to open the scoring in the second half. A Mikey Daniel 2-yard touchdown run and a third Wieneke touchdown catch filled the third quarter, and Christion stamped his standout game with a 1-yard run in the fourth. Christion ended with 6 total touchdowns.

A battle looked to be brewing in Estes Stadium as the No. 18 Cowboys of McNeese rolled into No. 4 Central Arkansas. The Cowboys led 10-9 after the first quarter thanks to a quick, 84-yard drive capped by running back Justin Pratt. Bears quarterback Hayden Hildebrand opened his big day in the first quarter with a 54-yard strike and kept his foot on the gas adding two more scores from 5 and 54 yards out in the second. Paired with a Jackie Harvell 28-yard punt return, the Bears led 30-10 at half.

The defense and special teams kept their big day going with a Chris Chambers 25-yard fumble return to open the second half. Hildebrand added his fourth touchdown pass from 48-yards out. Cowboys’ quarterback James Tabary through a 24-touchdown to Parker Orgeron to end the Bears 35-straight unanswered points streak, but Central Arkansas proved too much.

3. Illinois State got it done on all platforms

No. 21 Illinois State traveled to Youngstown, Ohio Saturday to battle No. 19 Youngstown State. The Redbirds flipped the scoreboard first after a 9 play, 72-yard drive finished off by running back James Robinson from 11-yards out. Less than a minute later, the star unit of the day, the Illinois State defense scooped and scored from 26-yards out and the Redbirds quickly led 14-0. Both defenses remained stout and saw 7-straight punts until Markel Smith scored on a 1-yard run to end the first half, 21-0 Illinois State.

Robinson got back on the scoring map with a 2-yard scamper early in the third. The Penguins looked to have finally found their offense, but a DraShane Glass interception in the end zone snapped the shutout-ending threat. Robinson and Smith marched the Redbirds’ offense 80-yards down the field through 7-minutes, only for Robinson to add his third touchdown. The Illinois State defense held the Penguins to just 147 total yards and forced two turnovers.

No. 1 James Madison squared off with No. 16 New Hampshire Saturday in Harrisonburg. Neither offense could get anything brewing early totaling 5 punts and a missed field goal. However, Dukes’ quarterback Bryan Schor found Ishmael Hyman to finally get on the board in the second. Schor added his second score on a 1-yard strike to Clayton Cheatham.

This game is going to come down to which team has the most toughness, the most unity, the most intensity… #GoDukes #DefendTheCrown pic.twitter.com/xXBiR9RTzA

The half ended with a pair of turnovers ending two lengthy drives from both teams. The Wildcats’ offense had the chains moving again to start the third quarter but on 4th and 3, Rashad Robinson picked it off and scampered 82 yards for the touchdown.

No. 25 UNI struck first at No. 2 North Dakota State on an Eli Dunne touchdown pass to Daurice Fountain. However, Dunne had his pass intercepted by Robbie Grimsley who returned it 27-yards for the touchdown and send the game to half tied at 7.

The second half was controlled by the Bison, who opened with a 22-yard Ty Brooks rushing touchdown and soon added a Cam Pedersen field goal. A RJ Urzendowski 31-yard touchdown catch from Easton Stick highlighted the day for the Bison passing offense.

No. 8 Samford scored first on a Devlin Hodges 21-yard touchdown pass against Chattanooga. The Mocs answered the call scoring 20-straight points on two Cole Copeland passing touchdowns and a Lucas Webb pick-6. Hodges struck twice in the fourth to put Samford back ahead, but a Victor Ulmo 39-yard field goal with :19 left sent the Mocs home victorious.

Stony Brook and No. 17 Richmond battled back and forth from the first snap Saturday. The Seawolves led the Spiders 17-10 at half, the difference being a Donald Liotone 3-yard touchdown run. Richmond cut the lead to 3 late in the third on Kyle Lauletta’s second touchdown pass of the day. Quarterback Joe Carbone put Stony Brook back up 10 in the fourth quarter connecting with Ray Bolden for their second touchdown. Lauletta added a late fourth quarter touchdown but an onside kick recovery sealed the upset.

Carbone to Bolden, once again connect for a score! Seawolves push lead back to 10 #HOWL #CAAFB pic.twitter.com/t1ERW6Fhvo

Furman controlled No. 20 Western Carolina from the start. They scored their first of 28 straight points first on a 44-yard pass from P.J. Blazejowski to Andy Schumpert. The Paladins controlled the second half on the ground with two Kealand Dirks touchdowns from 6 and 53-yards and an Antonio Wilcox 48-yard touchdown. Western Carolina scored a late touchdown on a Corey Holloway 2-yard run.