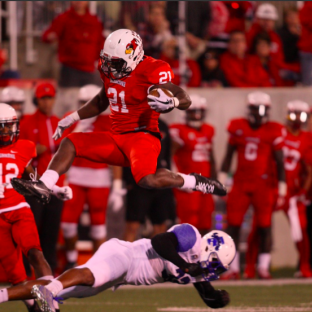 Which ranked teams fell this week and how will this affect the nation’s top teams moving forward? Here’s a round up to get you caught up on what happened this weekend in case you missed any of the action.

1. Illinois State celebrated homecoming in Hancock Stadium with a win over South Dakota

Without a tally in the loss column, No. 4 South Dakota traveled into Bloomington-Normal to take on No. 24 Illinois State, loser of two straight. Chemistry proved to be the difference early as the Redbirds’ quarterback Jake Kolbe connected with Spencer Schnell from 64 and 5 for a pair of early touchdowns. Not to be outmatched, the Coyotes knotted things at 14 thanks to a pair of Chris Streveler passing touchdowns within 4 minutes.

James Robinson seals the win with an 87-yard TD run.

A late 47-yard field goal by Sean Slattery put Illinois State up 17-14 at half. James Robinson ran in a touchdown for late in the third and the redbirds led 24-14, but Kai Henry and the Coyote offense answered right back with a run of his own. With 13-minutes left, an exciting finish seemed to be in store, but a pair of Sean Slattery field goals and a dagger 87-yard touchdown run by James Robinson gave the Redbirds a bounce-back homecoming victory.

No. 2 North Dakota State was met by No. 12 Western Illinois in the Fargodome Saturday afternoon. The Bison struck first 5-minutes into the game on a 37-yard Cam Pedersen field goal. The Leathernecks quickly answered with a field goal of their own from Sam Crosa. A pair of Easton Stick interceptions, one returned by Quentin Moon for a touchdown, put Western Illinois up 9-3 after the first.

NDSU is the only unbeaten team in @ValleyFootball heading into another big home game next week with second-place Northern Iowa. pic.twitter.com/2M6jKtiG7M

Easton Stick rebounded in a big way connecting late in the half with RJ Urzendowski from 58-yards out. Western Illinois led at halftime 12-10. With riled up fans in Fargo, the Bison defense came to play, posting a shutout in the second half. Two Stick rushing touchdowns from 2 and 8 yards capped off 70+ yard drives and handed the Bison the victory. Stick ended with 282 total yards and 3 touchdowns.

Unranked Delaware has yet to lose to an FCS opponent this season that isn’t ranked No. 1.

No. 10 Richmond went to Delaware Stadium hoping to change that stat. The two teams matched each other’s every move in the back-and-forth first half. The Spiders’ first half was led by senior quarterback Kyle Lauletta who passed for 2 touchdowns. The Fightin’ Blue Hens’ first half starred Jamie Jarmon who scored on a 74-yard rush and 19-yard catch. Jarmon’s second touchdown sent Delaware into half up 21-14.

Lauletta answered in the third quarter with two more touchdowns, one in the air and one on the ground. Down a score in the fourth, Jarmon rushed in and tied the game at 28. Overtime. It only took 3 plays for Lauletta to tally his fifth total touchdown of the day. In a different fashion, Delaware faced multiple third downs and converted to send the game into second overtime. Keeping the offensive rhythm going, Delaware scored on a Kani Kane touchdown, putting all the pressure on Richmond. A sack by Bilal Nichols on 3rd and goal pushed the Spiders back 19 yards and they could not convert on 4th down.

4. Samford walked into undefeated Wofford and came out the top dog

The Bulldogs of No. 14 Samford strolled into Spartanburg, South Carolina to take on the Terriers of No. 5 Wofford. It was a sloppy first half for both squads as 9 of 12 possessions did not result in punts, yet just 7 points were scored on each side. Chase Nelson ran in a touchdown for Wofford and Kelvin McKnight caught a touchdown to end the half for Samford. Samford quarterback Devlin Hodges added his second touchdown through the air connecting with Clarke Miller from 11-yards for the lone third quarter score.

That feeling when you crash the party and upset the No. 5 team in the nation on homecoming

However, both offenses got things rolling in the fourth quarter as Andre Stottard and Wofford tied it up early. Hodges tossed his third touchdown to put Samford back ahead, but a quick answer on a 10-yard run by Joe Newman knotted the score at 21 with 6 to play. Production from across the offense helped the Bulldogs on their final drive, capped by a 27-yard Jordan Weaver go-ahead field goal. With 1:30 to work with, Wofford marched 71 yards, but an Omari Williams interception in the end zone handed the terriers their first loss this season.

5. Northern Iowa defended the dome in upset over Youngstown State

No. 9 Youngstown State traveled to Cedar Falls to battle previously-ranked Northern Iowa in The UNI-Dome. Coming into Saturday, the Penguins had lost two straight games by 3 points, one coming in overtime; while the Panthers walked home victorious after beating South Dakota State. Kicker Sam Drysdale opened up the scoring with a 23-yard field goal on the Panthers first possession. Next possession Northern Iowa churned out 12 plays for 80 yards and eventually saw running back Marcus Weymiller scamper in from a yard out.

We’re just one-upping each other for sacks now! #UNIFight pic.twitter.com/KsgXaZtCo6

Struggling to get rolling, Youngstown State quarterback fired a pass to Damoun Patterson for a 41-yard touchdown and it was back to a 3-point game. Northern Iowa would not be satisfied however, as Weymiller took in his second touchdown from 6-yards out. A failed 2-point conversion had the Panthers ahead 16-7 at the break. A turnover on downs handed Northern Iowa solid field position early in the second half and resulted in a second Drysdale field goal. The Penguins’ offense stormed back late in the fourth quarter and marched 79-yards to score on a Ricky Davis touchdown pass to Alvin Bailey. However, an onside kick recovery and first down preserved the W for the Panthers.

BONUS: Southern Utah won its third game over a ranked opponent this season

No. 8 Eastern Washington looked bound to have a breakout game after the first quarter against Southern Utah. A Nsimba Webster touchdown catch and Sam McPherson run put the Eagles up 14-0. An eventful second quarter saw Thunderbird rushing touchdowns from James Felila and Jay Green, and a 96-yard kickoff return for Dre’ Sonte Dorton for Eastern Washington.

The second half proved a different story as Southern Utah controlled scoreboard thanks to a trio of Patrick Tyler passing touchdowns and Felila’s second score on the day. A BIG shakeup Saturday for all of the top-10.