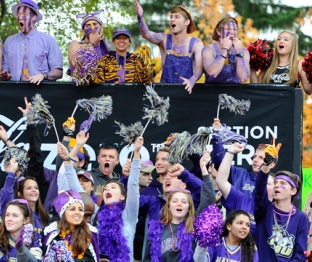 FCS football: Villanova takes on No. 1 James Madison and the stakes are higher this week

When the 14th ranked Wildcats of Villanova arrive in Virginia to take on the No. 1 James Madison Dukes, there’s a little more on the line than a football game.

ESPN’s College GameDay announced Sunday its return to The Quad in Harrisonburg for a second FCS special edition episode after visiting in 2015. A game in which GameDay analyst Lee Corso threw on the Duke Dog head, but the Dukes fell to the 11th-ranked Richmond Spiders 49-59. It is the eighth time College GameDay has set stage at an FCS school.

Bus will arrive on the Quad tonight at 5:30pm pic.twitter.com/HI48Lx0Ggf

Villanova and James Madison have squared off 25 times, with James Madison leading the series 14-11 (including wins the last two meetings). Last year, the Dukes won a 20-7 game that clinched the Colonial Athletic Association title.

RELATED: What you need to know about ESPN College GameDay at James Madison

James Madison has rallied off 17-straight victories since falling to FBS foe North Carolina, including the 2016 FCS National Championship. The Dukes, led by senior quarterback Bryan Schor are on pace to score over 450 points through the regular season. To put that in perspective, their defense is on pace to allow 125 points. Schor has scored 14 total touchdowns and passed for over a thousand yards through five games. He needs just 113 yards through the air Saturday to cross the 5000 career-yards milestone.

Though the potent offensive success, James Madison’s defense has kept them in and ahead of every game. Consistency is an understatement: The Dukes have allowed either 10 or 14 points in all five games, including 10 in their previous two wins over conference opponents Maine and Delaware. Productivity has come from across the depth chart totaling nine interceptions (5th most in FCS) and three fumble recoveries. Free safety Raven Greene has been a difference maker with 24 tackles, two interceptions and one forced/fumble recovery.

Villanova began the season with an impressive win over a ranked Lehigh team. The Wildcats offense has shined in their four victories averaging 38 points a game. Aaron Forbes and Matt Gudzak, the 5-foot-9 duo running backs are both averaging five yards per carry and have combined for over 500 rush yards and four total touchdowns. Experienced junior quarterback Zach Bednarczyk started five games this year and scored eight touchdowns. However, due to a knee injury, he has had to sit back and watch freshman Jack Schetelich get it done more so on the ground than through the air for the past two wins. The offensive production has guided the Wildcats to all four wins and afloat the top-20 all year.

Following a week one victory in which they allowed 35 points, the Villanova defense has yet to give up 20 points in a game. Despite two losses where opponents score 16 and 19 points, the wheels seem to be churning following their second upset in four weeks. Last week against Maine, freshman Jaquan Amos took a fumble 99-yards to the house (3rd 99-yard fumble return in FCS history). It was one of six turnovers forced by this hungry Wildcat defense.

James Madison enters the game as the No. 1 team in the country and have not been heavily tested all season. Villanova enters the game off two straight big wins hoping to crack back into the top-10 with an upset.

Two teams. One football game. Thriving on emotion built up throughout 25,000 fans packed into Bridgforth Stadium in all white. It’s Saturday. It’s Gameday.