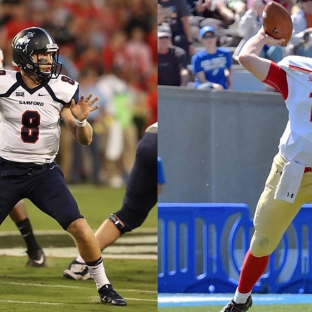 BIRMINGHAM, Ala. – When the 20th-ranked Samford football team squares off against VMI Saturday afternoon in Lexington, Virginia, the teams’ two starting quarterbacks will have more familiarity with each other than in most matchups.

VMI’s redshirt freshman starting quarterback Duncan Hodges is the younger brother of Samford junior Devlin Hodges. The older Hodges talked with the media Tuesday about facing off against his younger brother.

“It’s definitely exciting,” Devlin Hodges said. “Last year, they came down and they let him travel to come watch the game. That was just cool, seeing him on the other sidelines. It’s definitely going to be interesting to see him actually playing.”

The brothers grew up in the Kimberly, Alabama in the Birmingham area. Devlin was a four-year starting quarterback for their Mortimer-Jordan High School team. As a senior, he passed for 1,748 yards and 15 touchdowns, and earned Birmingham News All-Metro honorable mention honors.

After Devlin graduated, Duncan moved into the starting spot. The younger brother helped lead the team to a 5A state title game appearance, and he was named All-Region and honorable mention All-State. He was also named the Sideline 5A Offensive Player of the Year.

After a redshirt season at Samford, Devlin moved into the starting spot midway through his redshirt freshman campaign. As a sophomore, he was named the SoCon’s Offensive Player of the Year after setting school records for completions (375), attempts (530), passing yards (4,088) and touchdown passes (36).

So far this season, Devlin had picked up right where he left off last season. He has thrown for 1,624 yards and 16 touchdowns in just five games. Two weeks ago against Western Carolina, Devlin passes for a school-record 516 yards, while last week he was named SoCon Offensive Player of the Week after leading the team to a 35-14 win over The Citadel.

The younger Hodges spent the 2016 season as a redshirt. He earned his first collegiate start last week against Mercer. In the game, he threw for 135 yards and a touchdown.

Devlin said there has always been a lot of good-natured competition between the two brothers. He said he is looking forward to competing on the same college field as his younger brother.

“We definitely have a lot of friendly, family competition,” Devlin said. “We’re used to it, we’ve had that competition growing up and I’m just kind of excited to actually play against him.”

Saturday’s game is scheduled for a 12:30 p.m. (CT) start from Lexington, Va. The game can be heard locally on FM-99.1 The Game or online at www.991thegame.com. The contest can also be seen live on ESPN3.