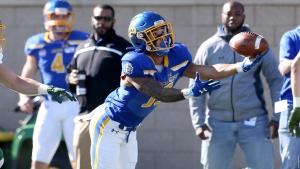 
The 2019 battle for the Dakota Marker sure lived up to the hype with North Dakota State just barely escaping South Dakota State on a late 71-yard touchdown run. As a result, the Bison stay perched atop the new FCS Coaches’ Poll while SDSU dips just two spots.

The Jackrabbits were a fourth down stop away from being in great position to end the No. 1 Bison’s 29-game winning streak. While SDSU ultimately lost and dropped two spots to No. 5, the Jackrabbits showed why they still belong near the top of the rankings.

SDSU held NDSU to a season low in points (16) and passing yards (62 yards) along with its second lowest output of total offense (394 yards). The Jackrabbits led the Bison 6-3 at halftime and were tied 16-16 at the 2:32 mark in the final quarter before Adam Cofield ripped off a 71-yard game-winning touchdown.

SDSU kept it this close despite losing starting quarterback J’Bore Gibbs early in the first quarter due to a knee injury. That was a massive blow to an offense that still nearly matched NDSU in total yardage, 394-330.

With a healthy Gibbs, it’s easy to imagine another rematch between these two teams deep in the 2019 FCS playoffs. SDSU is 0-2 against NDSU in the postseason in the past three years, including a 44-21 loss in last year’s national quarterfinals.

Moving up and moving down

While no new teams joined the top 5, Weber State and South Dakota State swapped spots at Nos. 3 and 5, respectively. The Wildcats took down then-No. 22 UC Davis 36-20 to stay undefeated atop the unpredictable Big Sky. Kennesaw State stayed put at No. 4.

Overall, the biggest movers within the top 25 were No. 17 Florida A&M (six spots) and No. 19 Central Connecticut State (five spots). Both carry just one loss on the year, coming against FBS opponents.

Including South Dakota State, nine more Top 25 teams from last week lost this past weekend, including three against ranked teams. No. 11 Villanova dropped five spots following a loss to Stony Brook on a game-winning field goal. No. 15 Montana State fell six spots out of the top 10 after a 16-12 defeat to North Dakota.

Four teams dropped out of the top 25 after Week 9 losses: Delaware, Incarnate Word, UC Davis and Sam Houston State. In their places, No. 20 Wofford, No. 21 Southeast Missouri State, No. 23 North Dakota and No. 25 Austin Peay rejoin the ranks.

As we turn the calendar to November, only three programs remain undefeated across the FCS — including the only two teams to finish the 2018 season with perfect records. North Dakota State (8-0), Princeton (6-0) and Dartmouth (6-0) all crack the top 15 in this week’s poll.

No. 1 North Dakota State is 8-0 this year and has won 29 straight games, ranging back to a November 2017 loss to South Dakota State. The Bison would tie their own FCS record of 33 straight wins by closing out the regular season without a hitch.

NDSU has made it through the toughest part of its regular season schedule with four top-10 wins in the past five weeks. Next up is a challenging road trip to Youngstown State on Saturday.

No. 12 Princeton and No. 14 Dartmouth square off head-to-head on Nov. 9 at Yankee Stadium in a matchup that could ultimately decide the Ivy League champion. The Tigers went 10-0 last season to win their 12th conference title.

Top games to watch in Week 10

Two ranked matchups headline the Week 10 schedule, including a critical Big Sky meeting between No. 3 Weber State and No.  6 Sacramento State. Below are some of the most notable games to follow this Saturday, Nov. 2: