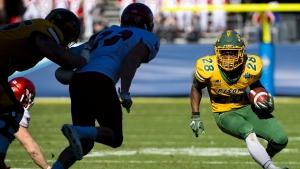 
Six-time national champion North Dakota State is once again No. 1 after claiming the top spot in the 2019 preseason FCS Coaches Poll. This is the sixth time in eight years that the Bison open as No. 1.

How does the preseason top 25 affect the playoff picture come late November? Fourteen of the 25 ranked teams in last year’s preseason poll qualified for the 24-team FCS playoffs. Sam Houston State (No. 4) was the highest-rated team featured in the preseason rankings to miss the postseason, after finishing 6-5.

Five new teams crack the 2019 preseason poll after being left off last year’s final rankings. They include No. 13 Illinois State, No. 17 Furman, No. 20 Northern Iowa, No. 22 Sam Houston State and No. 25 Central Arkansas.

North Dakota State is the team to beat (again)

The Bison return just seven starters from last year’s championship squad and have a new head coach in former defensive coordinator Matt Entz. But that didn’t stop voters from selecting North Dakota State as the No. 1 team.

Monday’s poll was released shortly after a major announcement was made by Entz earlier in the afternoon: Trey Lance, a redshirt freshman who played in two games last year, will be the Bison’s starting quarterback entering 2019. He’ll be joined by first-time starting running back Ty Brooks in a new-look — but still dangerous — offense.

The Bison will be challenged early with a three-game stretch at No. 23 Delaware on Sept. 14, home against No. 5 UC Davis on Sept. 21 and at No. 13 Illinois State on Oct. 5. The annual Dakota Marker rivalry game with No. 4 South Dakota State then looms on Oct. 26.

Trey Lance, a 6-3, 221 redshirt freshman from Marshall, Minn., will be NDSU’s starting quarterback in the season opener Aug. 31 vs. Butler. #FCS pic.twitter.com/1NID8nsvk7

BISON’S OUTLOOK: 3 reasons why NDSU will win again in 2019 | 7 schools who could stop its run

Sorting through the other top contenders

James Madison, the last team to defeat North Dakota State in an FCS playoff game, returns to the No. 2 spot despite losing coach Mike Houston to East Carolina. Curt Cignetti takes over a program returning almost every starter from last year’s 9-4 campaign.

The Missouri Valley Football Conference and Colonial Athletic Conference each have five representatives in the preseason top 25, including the top two teams in North Dakota State and James Madison.

The Big Sky follows right behind with four teams, including three top 10 squads (Eastern Washington, UC Davis, Weber State). Last year, the Big Sky was the only conference with a trio of teams who advanced to the FCS national quarterfinals.

Overall, 10 FCS conferences are represented in the first Coaches Poll. The leagues left off the preseason poll are the Northeast, Pioneer Football League and SWAC.