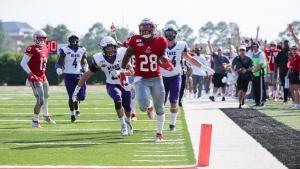 
The top 5 teams went unchanged in the latest FCS Coaches’ Poll, but a few squads just outside the top 10 are gaining steam. Here’s everything you need to know entering Week 7.

North Dakota State is now seven wins away from matching its own FCS record for most consecutive victories (33). NDSU’s latest win, a 37-3 beatdown at No. 6 Illinois State this past Saturday, was the Bison’s fourth win by at least 25 points in their first five games of 2019.

North Dakota State did not allow a single point after the 2:03 mark in the first quarter, as its suffocating defense held the Redbirds to just 200 yards of total offense. Trey Lance was once again ultra-efficient under center for NDSU, finishing 12-of-15 with three passing touchdowns and no turnovers.

NDSU has glided through its challenging schedule, defeating then-No. 18 Delaware, then-No. 4 UC Davis and then-No. 6 Illinois State in three straight weeks. Next up is a homecoming game against another playoff hopeful, No. 10 Northern Iowa.

The Bison football team won its 26th straight game Saturday, rolling up 482 yards of offense and keeping #6 Illinois State out of the end zone in a 37-3 road victory. pic.twitter.com/aAlA5WfyWs

The Bison enter Week 7 as the unanimous No. 1 team for a sixth straight week in the FCS Coaches’ Poll. Behind them, James Madison, South Dakota State, Kennesaw State and Weber State also stand pat in the top 5.

Nicholls jumps to No. 12 after Central Arkansas upset

No. 12 Nicholls is back on the cusp of the top 10 after an impressive 34-14 win over then-No. 10 Central Arkansas in a key Southland matchup. The Colonels are now 2-0 in conference play and are joined at the top of the standings by Sam Houston State (3-0).

Nicholls fell six spots in the Coaches’ Poll last week after a 24-3 loss to FBS member Texas State. But the offense re-awoke Saturday at home against the Bears. Nicholls opened up a 20-0 lead by halftime and put up 477 total yards for the game.

Senior quarterback Chase Fourcade completed nearly 83 percent of his passes against UCA (24-of-29) and now has nine total touchdowns on the year. In Nicholls’ three wins, he has a 79.7 completion percentage.

Nicholls next faces Northwestern State (0-5) in Week 7 before a pivotal matchup at No. 24 Sam Houston State on Oct. 19. The winner of that matchup could have the inside track toward a Southland conference championship.

FCS OVER FBS: All-time history and results for FCS wins over FBS teams

It’s time to start paying attention to No. 11 Furman

Furman is a dangerous team down at No. 11, a three-spot leap from last week. The Paladins have been ranked in the FCS Coaches’ Poll every week so far in 2019, starting with a No. 17 preseason ranking. Furman finished 6-4 in 2018 but ended the year on a 6-1 run.

The Paladins are 4-2 this year with two one-score losses to FBS programs. In four FCS matchups, they’re averaging 41.5 points per game.

Furman’s latest win came in a 58-14 stampede over Samford. Standout running back Devin Wynn finished with 218 yards on 15.5 yards per rush. The junior had three total touchdowns, coming on 61, 75 and 89 yards.

The Paladins’ high-flying offense will be on a bye week this Saturday before hosting The Citadel next on Oct. 19. Furman (3-0) is one of two undefeated teams left in SoCon play along with Chattanooga (2-0).

At the bottom of the poll

Only one new team enters this week’s rankings — No. 24 Sam Houston State. The Bearkats come off a 31-20 win over Southland rival Stephen F. Austin and are ranked for the first time since Week 3.

Just above SHSU is No. 23 Stony Brook, who actually gained a spot after losing to No. 2 James Madison in overtime. The 4-2 Seawolves play a formidable New Hampshire team (received votes) this Saturday and then visit No. 7 Villanova on Oct. 26.

Defending national runner-up Eastern Washington and Houston Baptist both dropped out in the Week 7 poll. EWU is 2-4 after starting the season at No. 3.

In receiving votes, North Dakota is first with 50 points, followed by Sacramento State with 42. UND has two ranked wins so far, including this past weekend over then-No. 12 UC Davis.

Top games to watch in Week 7

North Dakota State, James Madison and South Dakota State all have tough matchups this weekend against ranked conference foes. Are we due for a shakeup in the top-5 next Monday?

Here are the top games to watch this weekend: