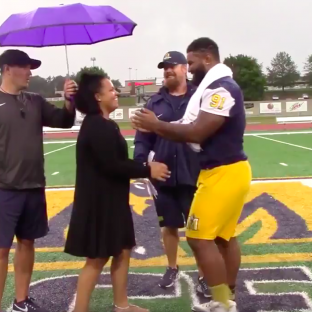 Murray State senior defensive lineman Bishop Woods has filled the stat sheet in his four seasons playing for the Racers: 136 total tackles, 17 tackles for loss, two forced fumbles and two blocked kicks. But his most memorable moment on the football field came after practice on Tuesday, when he married his longtime girlfriend, the former Caitlin Myers, in a ceremony officiated by offensive line coach Brian Hamilton.

Judging by the celebration after the couple exchanged vows, it sounds like the Murray State football team was on hand to be part of the special occasion.

You can watch the Woods’ wedding ceremony below.

Congratulations to the new Mr. and Mrs. Woods.