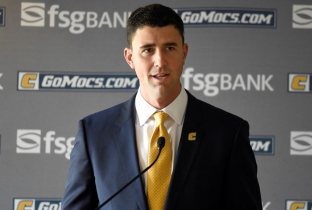 FCS football: Most notable coaching hires of the offseason

Five teams from the top 15 of last year’s final FCS coaches poll have new leaders at the helm entering 2017. In a whirlwind of an offseason, it’s easy to lose track of all the changes.

Here are some of the most notable FCS coaching hires:

Charleston Southern stayed in house with its hiring of former quarterbacks coach Mark Tucker to replace Jamey Chadwell (now at Coastal Carolina) in January. In four years as an assistant at CSU, the Buccaneers have reached the playoffs twice (both in the past two years). CSU was sixth in the nation in rushing (266.5 yards per game) last year and advanced to the first round of the FCS playoffs despite losing starting quarterback Kyle Copeland for the season due to a September injury.

Tucker is a former offensive assistant at his alma mater ETSU and The Citadel.

Chattanooga dug into the Division III ranks to find its 23rd coach in program history. Former John Carroll coach Tom Arth averaged 10 wins per season in his four years at the helm and led JCU to the national semifinals this past season. He was named DIII National Coach of the Year in 2016 after a 12-2 finish and the program’s first conference championship.

Arth played three seasons in the NFL after graduating from John Carroll in 2003. He returned to his alma mater in 2010 and served in multiple offensive assistant roles before becoming head coach in 2013. Now he takes the reins at Chattanooga, which finished 9-4 and lost in the second round of last year’s FCS playoffs.

It’s been a steep fall for the Blue Hens since their last national championship appearance in 2010, as Delaware has averaged less than six wins with no playoff appearances over the last six seasons. New head coach Danny Rocco will try to right the ship.

Rocco comes over from Richmond, where he brought the Spiders to three playoffs in five years. After an inconsitent start to the season in 2016, Rocco’s Richmond team rallied to advance to the national quarterfinals. Rocco has a defensive background as a former linebackers coach at Virginia, Maryland and for the New York Jets.

Beau Jordan’s decision to leave EWU to become Cal’s next offensive coordinator marked the end of a nine-year run that saw 85 victories and six playoff appearances in Cheney, Washington. In his place, the Eagles have turned to Aaron Best, who has been a part of the program for the past two decades.

Best graduated from EWU in 2001 and has served in a variety of offensive coaching roles under Jordan, including offensive line coach and running game coordinator, for one of the most explosive offenses in the FCS. The Eagles had the top passing offense last year (401 yards per game) and return the nation’s leading passer in Gage Gubrud (5,160 yards in 2016). EWU advanced to the national semifinals last season.

Howard landed a coach with experience at the FCS and FBS level to kickstart its attempt to move past a 2-9 2016 season. Mike London comes to D.C. with an FCS championship and an ACC Coach of the Year award already on his resume.

London most recently served as a defensive line coach for Maryland last year. Prior to that role, he served as Virginia’s head coach for six seasons and had one bowl appearance. That came after a two-year tenure at Richmond, where he won 24 games and led the Spiders to the 2008 FCS national championship. London now faces the tall order of delivering Howard’s first winning season since 2012.

Replacing Rocco, Richmond tabbed a key staff member from its 2008 national championship team to take the reins. Russ Huesman served as the title team’s defensive coordinator and returns to the Spiders after a successful eight-year run as head coach at SoCon rival Chattanooga.

Huesman is a three-time conference coach of the year and led the Mocs to three consecutive playoff appearances from 2014-16. Richmond was 11th in total defense last season (317 yards per game), and the Spiders will continue to emphasize that side of the ball with Huesman at the helm.

There was no question as to who would replace longtime Villanova coach Andy Talley when the 72-year-old announced his retirement after 32 years at the helm of the Wildcats. It will be a smooth transition for new hire Mark Ferrante, who served under Talley for 30 of those seasons and was named head coach in waiting in 2015.

Ferrante takes over a program that won nine games last year and appeared in the 2016 playoffs. Ferrante’s specialty is on offense, particuarly with the offensive line.