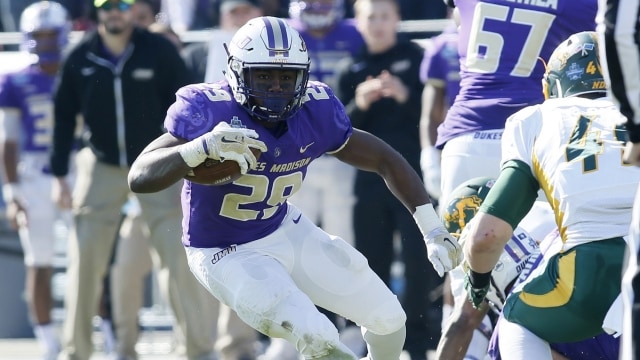 
Most college football fans will be watching FBS games on opening weekend, but there is must-watch talent at the FCS level, including several players who might play on Sundays next season.

Sure, North Dakota State and James Madison are going to be the teams to watch this year after the two teams met in the national championship last here, but here are the 15 players in all FCS that should be on everyone’s radar, starting with the quarterbacks.

The owner of 21 schools records, Samford’s Devlin Hodges might be the early season favorite for the 2018 Walter Payton Award. A finalist for the award last year, Hodges is a preseason first-team All-American and one of the most prolific passers in the country. Hodges completed 65.7 percent of his passes last season as a junior, throwing for nearly 4,000 yards and 31 touchdowns. He recorded 331 passing yards per game.

Can North Dakota State really win their seventh Division I championship in eight seasons? Yes. And Easton Stick is the player who will be responsible for taking the Bison there, again. He was last year’s championship game most outstanding player as a junior and threw for 28 touchdowns on eight interceptions while rushing for 12 scores.

The third-ranked Jackrabbits have a Walter Payton candidate themselves, with senior quarterback Taryn Christion. He was a finalist for the award the past two years and has lit up opposing defenses in the process. He threw for a school record 35 touchdowns last season and should finish around a career 13,00 passing yards after this season.

Zerrick Cooper’s name won’t show on any preseason All-American lists, but who would write off a former Clemson Tiger quarterback? Cooper was the primary backup to Kelly Bryant last season for the Tigers, but transferred in the offseason to Jacksonville State. Expect him to be given the reigns to the Gamecocks offense.

Marshall had a modest season with the Dukes last year after transferring from Georgia Tech. Still, 850 yards with 11 touchdowns is a standout season in many regards, especially considering Trai Sharp and Cardon Johnson were also heavily featured in the Dukes’ backfield. All three are still in Harrisburg, but Marshall is the back to watch if James Madison is to return to the championship game.

What makes North Dakota State so good is not only does it have one of the best quarterbacks in the country, it has arguably the best running back as well. Anderson is a preseason first-team All-American and is another preseason Walter Payton candidate. Anderson rushed for 1,216 yards and 12 touchdowns last season, despite only starting in half of them.

What else is there to know about the reigning FCS rushing leader, first-team All-American, Walter Payton Award finalist and Patriot League player of the year? Dom Bragalone is back for his senior season and attempting for a third consecutive season with more than 1,000 yards rushing. He needs just four more rushing touchdowns to become the school’s all-time career leader. The Mountain Hawks are vying for a third straight conference title.

Perhaps one of the highest-rated FCS prospects, Keelan Doss is one of the most exciting playmakers at the FCS level. The 6-3 Doss had a career season in 2017 with 115 receptions for 1,499 yards and seven touchdowns. He was a Walter Payton Award finalist and could be again if he can fight through opposing teams’ double coverage.

Staying at wide receiver, Emmanuel Butler is another player who should put up similar numbers to Davis. At 6-4, there aren’t many players at the FCS level that have the size to match up to Butler. He registered back-to-back 1,000-yard receiving seasons in 2015 and 2016 before suffering a season-ending injury last year. If Butler’s healthy, there might not be a receiver at the FCS level better than him.

As a sophomore last season, Chris Terrell led the Bears with 11 sacks and 20 tackles for loss on his way to first-team All-Southland Conference honors. Now with conference defensive player of the year George Odum and defensive linemen Chris Chambers and Eric Jackson gone from last year’s team, Terrell will be the catalyst of the defense and a potential first-team All-American.

On the preseason All-American defensive line with Terrell is Samford’s Ahmad Gooden, the reigning Southern Conference defensive player of the year. He led the Bulldogs with 15.5 tackles for loss and 5.5 sacks in 2017 as a junior. He finished seventh in voting for the Buck Buchanan Award, which is given to the FCS top defensive player.

For all that can be said about the James Madison running game, Rashad Robinson is arguably the greatest reason the Dukes have gone to the national title game the past two seasons. Robinson, rated by some sites as a top 10 cornerback in the upcoming draft, has registered 10 interceptions the past two seasons, including seven last year which ranked third in the FCS. He is an early-season favorite for the Buck Buchanan Award.

TOUCHDOWN DUKES!! Rashad Robinson steps in front of a 4th-down slant and takes the pick-six 82 yards to the barn! Dukes lead, 21-0! pic.twitter.com/KuB3I1NjzI

Last year’s national freshman of the year is back to prove that not only will he overcome a sophomore slump, but also that he’s the best linebacker in the country. While there’s plenty of competition for that moniker, Bryson Armstrong is certainly at least one of the best. As a freshman, he set a conference record with 11 solo sacks and set a school record with 114 tackles.

RELATED: The 10 best FCS uniforms, according to fans

So Armstrong might be one of the best, but it’s difficult to argue that Montana linebacker Josh Buss isn’t the best in the FCS at the position. For starters, he’s the only FCS player on the Butkus Award watch list. Buss is coming off offseason surgery but is a first-team preseason All-American. When he was fully healthy as a redshirt junior, Buss racked up 13.5 tackles for loss and 5.5 sacks with 94 total tackles.