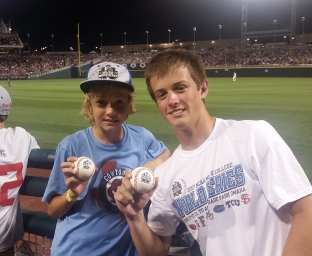 But Blake Dieckmann, 19, of Fremont, Nebraska, defied the odds during Thursday night’s TCU vs. Louisville College World Series game, as he got his hands on a pair of keepsakes by the fourth inning.

“I’ve been coming to sporting events all my life and I’ve never gotten a single foul ball, so to get two at the College World Series is pretty amazing,” said Dieckmann, who sat in the first row down the right field line.

Frantic research being done to see if that’s a record!! pic.twitter.com/gW9Xl93yOM

Dieckmann snagged his first foul ball during the second inning on a pop up down the line. Two innings later, luck struck twice on a liner that bounced right back to him.

“The first one was more of a pop fly so I knew it wouldn’t hurt that much. So I kind of just stuck my left hand up and fell into it,” he said. “The second one was more of a line shot, so I kind of got a little nervous and pulled away. It hit behind me and rolled back to me.”

Not being greedy, Dieckmann offered up the second ball to a young Horned Frogs fan nearby. “He’s been cheering the whole game for TCU, so I figured he deserved it,” he said.

However, Dieckmann will find a place in his room to showcase his first keepsake.

Dieckmann comes to Omaha each year for the College World Series, and while he doesn’t have a particular rooting interest in any team, he said he chooses a school to pull for each year. This year’s choice was TCU, who, by coincidence, was up to bat for both foul balls.

“I grew up watching them when they were playing in the super regionals and now they’ve played here for [four]straight years, so you get used to them being here,” he said.

As for whether he thought he’d be the target of a third foul ball before the end of the night, he didn’t rule anything out.

“I wasn’t planning on it but I better watch out,” Dieckmann said. “I’ll bring the glove next time.”