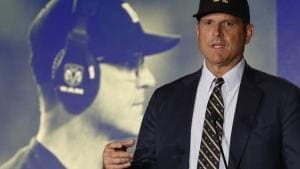 
Jim Harbaugh is set to enter his fifth season at the helm of the Michigan football team. He spoke at Friday’s Big Ten media day about expectations for the coming season. Here’s everything the head coach said.

You can see the full transcript here.

JIM HARBAUGH: I guess I’m the warm-up act for Bill Carollo to follow. Great to see everybody here. Hope you had a good summer.

Brought three really good football players with us to Chicago this weekend, Ben Bredeson, starting offensive guard; Jordan Glasgow, plays multiple positions on our defense, the viper, then will linebacker, by far our best special teams player; and Khaleke Hudson, maybe one of the best leaders on our team, is one of the best leaders on our team, our viper, combination safety, outside linebacker, can really rush the passer, tremendous football player. All three just go. They never really ask why, they never pout, they never complain. Three true football players.

A lot like our team. We have multiple guys like that. We’re young, we’re an enthusiastic team, but we’ve got guys that have played in a lot of games and a lot of experience. Ben Bredeson has played in 38 games since he’s been at the University of Michigan out of a possible 39. Khaleke has played in 38 out of 39, and Jordan Glasgow has played in 39 out of 39 over the past three years.

MEDIA DAYS: Everything you may have missed from SEC media days

JIM HARBAUGH: I don’t have all the answers to that. Maybe something that would be worthy of you researching, studying.

JIM HARBAUGH: Sure, so it really starts with our goals. You named half of them anyway. And also to win the Big Ten Championship, qualify for the playoffs, win the National Championship. Those are our goals, and then you put those to the back of the mind and focus on how you can achieve those.

Q: How does what Coach Gattis with the new offense, how has it helped you in recruiting?

JIM HARBAUGH: Okay, I’ll start with just how it’s helped us with our football team. Really felt watching Shea Patterson especially and Dillon McCaffrey also, their playmaking ability, their ability to operate as a passer and as a runner, how explosive they both are, Shea with his ability to make quick decisions, really fits the shotgun, really fits the RPO world, really fits the up-tempo. They really like it.

I would say the same for Joe Milton and Cade McNamara. That’s the kind of systems that they are used to and come out of high school playing, and you could say that for most all quarterbacks now that are playing high school football, that’s really the trend there.

So with Coach Gattis, been watching Coach Gattis since he was at Western Michigan and followed his career, felt he was just very decisive when the opportunity presented itself to hire Josh Gattis, he’s been excellent. We’ve been learning from him. He’s got a great system. And also like our team. I said earlier, we’ve got a young, enthusiastic team, which also has a lot of experience. You could describe Josh Gattis in that very same way. He’s a young, enthusiastic, high-energy coach that really fits our team because we have a group of coaches that are exactly that way. Don Brown is, as I said before, Don, I have not coached with a better coach than Don Brown.

I would put my son Jay Harbaugh, who coaches the running backs, in that group of — but humility prevents me from doing that. But the facts are he is one of the best young coaches I’ve seen in 35 years, so I’ll put him in that group.

We’ve just got a great staff. It’s a staff that you feel like you’re locked arms with 10 other guys and attacking the world. Ed Warriner, our offensive line coach, really improved our offense last year in terms of the running game, in terms of pass protection, sacks allowed, right across the board, and Mike Zordich, our secondary coach keeps producing corners that play at a high level, not only play at a high level in the Big Ten conference and nationally, also go on to have really good pro careers and be drafted high. He’s an outstanding coach.

I think you know about Chris Partridge. He’s been on our staff quite a while. He’s in the same category, soon to be head coach, tremendous in all areas, coaches our special teams and our safeties and does a fabulous job.

And Ben McDaniels coaches our quarterbacks, does a phenomenal job. He grinds, he works extremely hard at it, and he really knows it and has learned it and now is an expert in this offensive system that Josh has brought.

So across the board, I just feel our coaching staff is in the best place it’s been. Feel like some real reinforcements on the staff.

Thanks for that question.

Q: You mentioned a podcast, you talked about Urban Meyer, “Controversy follows him” I think it was. Any context we should know about with that line and any regrets about the comment?

JIM HARBAUGH: No, I don’t see any — no context you should know about. I don’t think it was anything that was anything new or anything of a bombshell. It’s things that many of you all understand and have written about.

Q: What should Illinois expect from Brandon Peters? What are some of his best assets, and what did you think he needed to work on?

JIM HARBAUGH: Oh, Brandon brings a lot to the table. He’s 6’4″, athletic, very strong arm, and a very sharp guy. I support Brandon in his decision to transfer, and I wish him great success.

Q: Just wanted to get your thoughts on Ohio State hiring Greg Mattison and Al Washington and what that adds to the rivalry, as if it needs it.

JIM HARBAUGH: I don’t really have any thoughts on that anymore. I’ll just refer you back to the comments that I made about I really love our staff at the University of Michigan right now.

Despite losing a bunch of talent on defense, Jim Harbaugh is confident there’s plenty of guys ready to step up. pic.twitter.com/8czqV8xfnf

Q: I wanted to ask you about Oliver Martin. Were you surprised when he decided to transfer, and what’s your context as far as whether or not you would allow him to play right away at Iowa or write a letter for him?

JIM HARBAUGH: Yeah, I was surprised that Oliver transferred. He really had a heck of a spring and was at the top of our depth chart coming out of spring ball and was doing very well in school. On his way to the Ross Business School. So that was a surprise.

My opinion on it, which I could give you, is that it should be clear to what the rules are for youngsters when they transfer. My opinion is that every student-athlete should have a one-time ability to transfer and not have to sit out a year, and then if they were to transfer a second time, then the previous rule that we had, where you had to sit out a year of eligibility, and with that, I would also keep the graduate transfer rule that we have in place right now, where you can graduate and transfer and become immediately eligible.

You have one time where you can transfer, be immediately eligible. A second time you’d have to sit out a year, while still having the graduate transfer rule. It would be good to just have a clear, concise, where everybody understands what the ramifications are. I think that would be a fair way to proceed.

JIM HARBAUGH: I think that’s where I would pick us.

JIM HARBAUGH: Yeah, I feel like, as I said earlier, I feel like our team is in a really good place. Young, enthusiastic team with players with a lot of good experience. I feel really good about our coaching staff, and like I said, I feel like it’s good, it’s tight, and we’re proceeding on a daily basis to make it even tighter, even better.

Q: How can this year’s team be different from years past and kind of live up to those high expectations of being at University of Michigan?

Yeah, doing that, better-disciplined thinkers, better focus on tasks day by day. That’s how we’re going about it.

Q: Jim, yesterday it was mentioned about the possibility maybe down the line of a game — the Big Ten being played in Mexico City. Given you guys’ traveling over the last few years in the off-season, what are your thoughts on that, and would you be interested if that scenario were to occur?

JIM HARBAUGH: Sure. Yeah, you know, we like travel. Mexico City would be great. I know you can talk about this, we’re scheduling — I think we’re really close to announcing, actually, playing another team on foreign soil. I won’t say what it is because — have you heard anything about this? Then I’d better not say it because we’re probably not ready to release that yet. But I think there’s something really imminent. There will be an announcement soon on that.

Q: With Brandon Peters, there’s a chance October 12th that you’ll be game-planning against him. What do you think about that, maybe that possibility, and how would you approach that?

JIM HARBAUGH: Yeah, well, when I said I wish him great success, I do, and I support him, and that will be one week that I won’t be wishing him great success. But I think it’s a really, really good possibility that that’ll happen because I recruited Brandon, really love Brandon, and he’s a heck of a good football player, and I do wish him success.

Specifically to your question, yeah, on that particular day, I won’t be wishing him as much success.