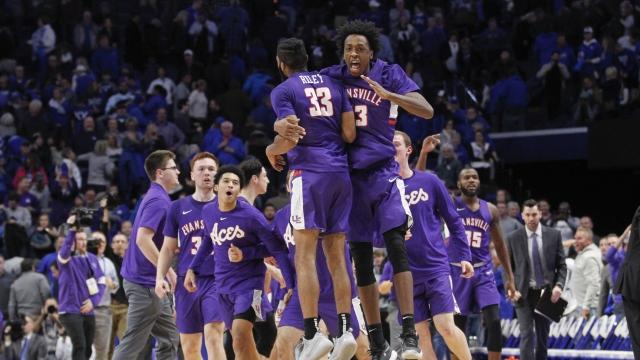 
True, what happened Tuesday night in Lexington does not quite top the gold standards for No. 1 teams getting bushwhacked by unranked underdogs. Virginia is still the unhappy owner of the wrong end of both of those — the unheard-of Chaminade over Ralph Sampson’s mighty bunch in Honolulu in 1982, No. 16 seed UMBC making history over the No. 1 seed Cavaliers in the 2018 NCAA Tournament.

Virginia: Victims Inc. Still, something was missing from those two upsets. The giants weren’t playing on their home court.

But Kentucky was against Evansville Tuesday night. “It felt like us against the world,” Purple Aces coach Walter McCarty would say after his underdog team had knocked down the Wildcats 67-64. “No one expected us to come here and play the way we did.”

This shocker is one for the memory banks, and not just because the Aces had never beaten a top-ranked team in their history. Or ever played Kentucky before. Or went 11-21 last season.

No. 1 Kentucky stunned at home by Evansville

And not just because the Final Four record book lists Kentucky with 131 all-time NCAA Tournament victories, and Evansville with one.

This stunner goes on a rare list. There had only been 11 home-court defeats this century of Associated Press No. 1 teams by unranked visitors. The three most recent are easy enough to remember.

Duke jumping ahead 12-0, having three players get double-doubles and still losing to Syracuse 95-91 in overtime in Cameron Indoor Stadium last January. This, two days after the Orange had been thumped by 14 at home. “Life happens, and life happened to our team tonight,” Mike Krzyzewski said.
St. John’s arriving in Villanova in 2018 with an 0-11 Big East record, and promptly knocking off the Wildcats 79-75. “I’ve gone into every single game since I was 10 years old thinking that I was going to win,” said coach Chris Mullin. P.S. Villanova ended up national champions.
Gonzaga 29-0 — 26 of the wins by double digits — and needing only one last victory to finish off a perfect regular season in 2017. But a Zags team that had outscored the opposition by 24.9 points through 29 games was blown away in the second half by BYU 44-30, and beaten 79-71. They started the game with an 18-2 run, and still lost. “The season isn’t over,” Gonzaga’s Jordan Mathews said. No, it wasn’t. The Zags ended up in the national championship game.

But something about those three, and the other eight in the 2000s as well. They were all accomplished by high major opponents. Boston College over Syracuse and North Carolina, UCLA over Stanford (twice), matchups like that.

Evansville out-toughing Kentucky in Rupp Arena is a different flavor of shock. A pay-day game for the visitors that suddenly turned into an instant classic, and program-definer.  “It’s hard to do that in this building,” said John Calipari, who had been 148-4 against unranked teams at home, including the last 52 in a row.

You probably have to go back to 1993, and Long Beach State whipping Kansas by 15 points in Lawrence to find something similar. That was two days after Long Beach State lost by 35 to VCU. DePaul became upset targets for the unheralded. The Blue Demons managed it twice within weeks in 1981 — first to Old Dominion at home, then to St, Joseph’s in the first round of the NCAA Tournament.

Kentucky has been No. 1 so many times, the Wildcats were bound to trip over an unranked opponent every now and then. Matter of fact, 18 times in their history. But only three at home. The last before Tuesday was Auburn in 1988, plus Georgia Tech way back in 1955. And now Evansville. Can you pick when one sounds the unlikeliest?

So Tuesday was something to remember. For the Purple Aces, certainly. Kentucky, too.

“This was a great lesson for all of us, including me,” Calipari said. “We could say they got outplayed, and I could tell you I got out-coached.”

And now they’re on a short list nobody wants to join. It’s only mid-November, and we’re about to get our third different No. 1 team of the season.