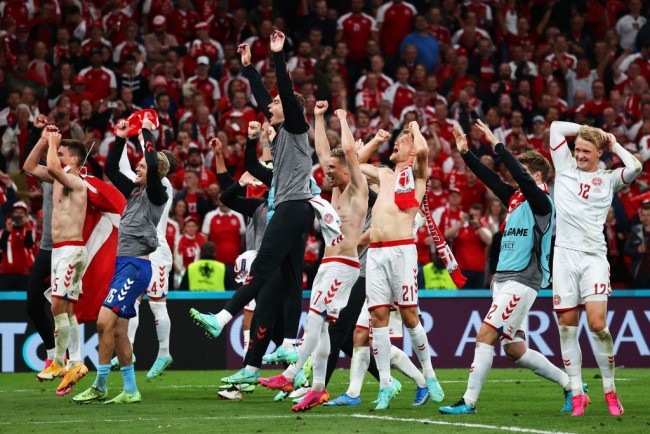 COPENHAGEN, DENMARK – JUNE 21: Players of Denmark celebrate in front of their fans following their side’s victory in the UEFA Euro 2020 Championship Group B match between Russia and Denmark at Parken Stadium on June 21, 2021 in Copenhagen, Denmark. (Photo : Wolfgang Rattay – Pool/Getty Images)

Denmark and Austria advanced to the knockout stages after dramatic victories in the Euro 2020 tournament on Monday. They joined the last 16 group winners Belgium and the Netherlands, who also recorded wins in their final group games.

Action resumes later today in Group D with Scotland taking on Croatia and England squaring off with the Czech Republic. England will go through as group winners if they beat the Czech Republic, and they will finish second if they draw or if Scotland does not win. On the other hand, the Czech Republic only needs to avoid defeat against England to finish top of Group D.

Denmark, Belgium advance in Group B

In one of the most remarkable turnarounds in the history of the European Championships, Denmark qualified for the last 16 with an emotional 4-1 victory over Russia in Copenhagen. After suffering defeats in their opening two matches and losing star player Christian Eriksen who collapsed in their tournament opener against Finland, not many expected Denmark to advance to the knockout rounds.

They made the impossible possible, however, as results went their way on Monday. Needing a huge win against Russia, who started the night in second place, Denmark went on the attack right from the get-go. Mikel Damsgaard opened the scoring in the 38th minute with a long-range strike, becoming Denmark’s youngest goalscorer at a major tournament in the process (20 years and 335 days).

Yusuf Poulsen doubled Denmark’s advantage in the 59th minute after pouncing on an errant back-pass by Roman Zobnin. Russia pulled one goal back in the 70th minute with an Artem Dzyuba penalty.

However, Andreas Christensen settled Denmark’s nerves with a thumping strike just outside the box in the 79th minute. Joakim Maehle then added a fourth goal just three minutes later that all but sealed Russia’s fate in this tournament.

Denmark needed some help from Belgium, though, for them to advance to the last 16. The Belgians duly obliged, beating Finland 2-0 in the other group match to set up wild celebrations in Copenhagen. Finland keeper Lukas Hradecky scored an own goal in the 74th minute before Romelu Lukaku sealed the win with a strike in the 81st minute for Belgium, who maintained their perfect record in the tournament.

Belgium’s win not only benefited Denmark but also helped the causes of England, Sweden, France, and the Czech Republic as they are guaranteed to progress to the knockout stages even if they drop to third place because they all have four points already.

Austria booked a spot in the knockout stages of the European Championships for the first time in their history after beating Ukraine, 1-0, on Monday. Christoph Baumgartner’s close-range goal in the 21st minute ensured Austria’s passage to the last 16, where they will next face European heavyweight Italy, who have won each of their three group matches in this tournament.

The Netherlands, on the other hand, finished top of Group C with nine points after recording a comprehensive 3-0 victory over North Macedonia. Memphis Depay and Georginio Wijnaldum scored the goals for the Dutch, who will travel to Budapest for their round of 16 tie, where they will square off with the third-place finisher from Group D, E, or F on June 27.

Share. Twitter Facebook Google+ Pinterest LinkedIn Tumblr Email
Previous ArticleMeet the Cardinal and their mustaches, as Stanford lives to see another day at the CWS
Next Article NC State shuts out Vanderbilt in an intense pitching battle