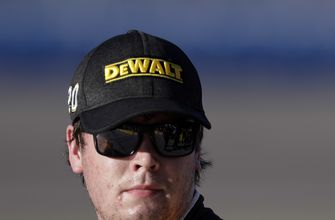 LAS VEGAS (AP) — Erik Jones surprised the field by winning the pole Friday for the opening race of the NASCAR Cup series playoffs, turning a lap in 28.705 seconds and narrowly edging Joey Logano.

Jones opened the first weekend of NASCAR’s 10-race postseason by earning his second career pole in his Joe Gibbs Racing Toyota. The 22-year-old is the youngest driver ever to win the pole at Las Vegas Motor Speedway.

“You can’t start them off any better than that,” Jones said. “We’ve got a long way to go this weekend, but we’ve got the speed to do it. … Was it maybe unexpected to outsiders, or people that aren’t in our group? Probably, but we’ve been consistently setting the bar high. For us, it was not a big surprise to be quick.”

Logano did his lap in 28.708 seconds in his Team Penske Ford to take a front-row spot. Denny Hamlin was third, followed by Kyle Busch and Kevin Harvick.

The Vegas race is the first of 10 playoff contests to crown a champion. Jones is in the 16-driver playoff field for the first time, joining Alex Bowman as the debut playoff contenders for the title.

Jones had just one previous pole in his first 65 Cup races, but the youngster is quietly making progress. He earned his first career victory at Daytona in July by holding off Martin Truex Jr. in overtime, and he has six top-10 finishes in eight races since that breakthrough.

“We struggled at the start (of the season),” Jones said. “Around Daytona, I started to find the feel I was looking for, and we just refined that day by day, week by week.”

Jones knows he isn’t a favorite to earn a spot among the final four contenders for the title alongside presumptive frontrunners Kyle Busch, Kevin Harvick and Martin Truex Jr., but he hopes to ride his momentum as far as it will go.

“I would say there’s probably a few dark horses” for the title, Jones said. “I don’t think we’re the only ones. The Big Three are obviously the favorites to get to (the final race in) Homestead, but somebody has got to fill that other spot.”

Logano’s result also was a pleasant development for a driver with a playoff spot despite earning just one victory this season. Logano laughed when asked if his strong showing in qualifying, combined with Brad Keselowski’s back-to-back wins heading into Vegas, meant that Team Penske had made a breakthrough in the garage in recent weeks.