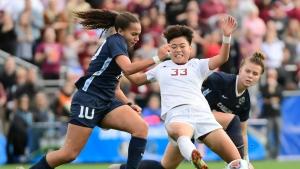 
One beautiful mark of women’s college soccer is reflected in its rivalries, specifically the non-conference matchups. They tend to be more mysterious because most aren’t scheduled to play annually.

Enter the postseason, where those games come alive with an added dose of adrenaline and become dream matches. We wondered which of those could happen this season and picked seven of them, along with the likelihood of the scenario happening. Some are based solely on a rivalry built through time and others include a competitive or compelling statistical matchup.

Dream scenario: The two most recent national champions meet in the semifinals for what would likely be a spot in the title game. This, of course, would be a matchup of last season’s semifinal round, where FSU ended Stanford’s bid at a second straight national title. The Cardinal could not push one goal across all night, leaving Cary, N.C., shut out, 2-0.

Both teams would include a possible 2019 Hermann Trophy winner in the Cardinal’s Catarina Macario and the Seminoles’ Deyna Castellanos. Macario won it in 2018 and was also named an All-American.

BEST OF THE BEST: Who are the 3 strong candidates for the Hermann Trophy?

The chance it happens — high likelihood: With most of each team’s roster returning from last season’s postseason push and a possibility that both teams would be a No. 1 seed due to their current United Coaches Poll rankings, this matchup ranks high in the likelihood category out of the matchups listed here.

Dream scenario: Rematches of previous postseason heartbreakers can make fans salivate. Indeed, that’s what happened last season in the quarterfinals when the Tar Heels beat the Bruins in penalty kicks, 4-2. Until that point in the NCAA tournament, neither underwent strenuous matches. UNC held a 11-1 goals margin and UCLA a 15-0 goals margin over opponents heading into the quarterfinal match.

If the scenario plays out and the two historical programs meet again in the postseason, a heavy chip will reside on the shoulders of the Bruins.

What. A. Match.
These highlights deserve another look ⤵️ pic.twitter.com/ESO0WybHvt

The chance it happens — high likelihood: FSU and Stanford aren’t the only programs with a likely candidate for the Hermann Trophy. UCLA’s Jessie Fleming is primed for the national title stage after being named a Hermann Trophy finalist last season and an appearance in the World Cup with the Canadian National Team. And if you took both team’s current ranking in the top four, they could meet in the semifinals of the NCAA tournament as No. 1 seeds, making this match high in likeliness.

Wake Forest vs. No. 12 West Virginia

Dream scenario: The upset that surpassed all other 2018 NCAA tournament second-round matches came at the hands of the Demon Deacons. Though, it was not the Deacons who introduced the havoc.

With 88.35 seconds remaining in regulation and Wake Forest up 1-0, No. 2 seed West Virginia tied it. Two additional scoreless overtimes forced penalty kicks, and that’s when it all unraveled for the favored Mountaineers.

After reaching the seventh round of penalty kicks, West Virginia missed and Wake Forest responded with a make, winning 6-5.

A rematch would offer the sense of a new newfound rivalry between the Southern programs.

The chance it happens — medium likelihood: Putting this rematch in the medium likelihood category is inspired by each team’s place within the United Soccer Coaches poll. WVU is currently ranked No. 12, while WFU garnered 23 points, 50 below No. 25 Southern Methodist. Both have a chance of making it to the NCAA tournament, and possibly being placed in the same draw.

Dream scenario: A matchup of last year’s best offense and best defense brings together two of the top teams in the nation for an interesting experiment. Does offense OR defense matter more to the game’s outcome? People have differing opinions on the subject, but putting the two to the test could enlighten both sides.

The chance it happens — medium likelihood: Depending on which draw each team would be given if the postseason began right now makes the Bruins vs. Hoyas matchup a littler harder to project. Their current spots within the top 15 would likely mean a spot in the tournament, but not necessarily a gateway to a postseason matchup.

Florida vs. No. 2 North Carolina

Dream scenario: Programs with history can usually pinpoint their success to a loyal fixture. UF and UNC have had the privilege of building their programs around one coach, and both remain the top two active DI coaches with the most wins, making a possible future matchup in the playoffs a must-watch.

Anson Dorrance is the founding father of the Tar Heels’ women’s soccer program, effective since September of 1979. He has accumulated 21 national titles, the most in DI women’s soccer history, with a 849-74-40 career record.

Becky Burleigh’s resume isn’t as extensive, but her mark within Florida’s program has set it up for success. Labeled as the founding mother of the Gators’ women’s soccer program, she’s mustered a 498-143-42 career record, split between her time in Gainesville (1995-present) and at Berry College (1989-93).

Within three years of their incarnation, the Gators clinched their first national championship in 1998, when they shut out the Tar Heels, 1-0, for the crown.

The chance it happens  — medium likelihood: After missing the NCAA tournament for the first time since 1995, the likelihood of Florida missing another in two consecutive season is slim — further adding to the anticipation of another possible Dorrance vs. Burleigh matchup. With UNC a candidate for a top seed and UF on the cusp of making the Top 25, receiving 44 points (29 points less than No. 25 Southern Methodist), the two teams have a chance of meeting in the postseason.

Being drawn in the same side of the bracket would be the best-case scenario for the actualization of this matchup.

The chance it happens — medium likelihood: The Bears have reached the quarterfinals of the NCAA tournament the past two years and the Tigers were ousted in the first round last season. In relation to each program’s recent history at the tournament, the likelihood of them meeting in the postseason seems slim. But based on the fact that both are currently ranked, they could meet in the NCAA tournament.

Dream scenario: Last year’s leading goal-scorers are also returning for their senior seasons as the top two active career goal leaders. Evelyne Viens of USF and Raimee Sherle of BSU have scored 48 and 45 career goals, respectively, after tying last season with 20 goals. A face off of both fiery forwards would put each team’s defenses to the ultimate test.

MORE ACTIVE CAREER LEADERS: Which three returning scorers round out the top 5?

The chance it happens — small likelihood: Boise State has only been to the NCAA tournament once (2009) in the program’s 21-year history, making the likelihood of the Broncos facing the Bulls small.