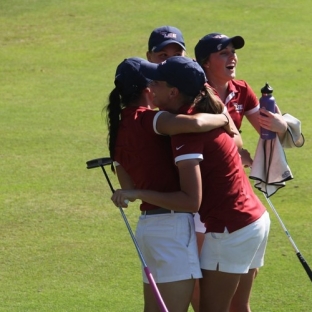 ELGIN, S.C. — The NCAA advertises its four Division II Women’s Golf Super Regionals as 54-hole competitions to determine the 12 teams that advance to the NCAA Championships.

But for Lee and Nova Southeastern, 54 holes simply weren’t enough.

Lee defeated the Sharks by a stroke on the second playoff hole to break a third-place tie, sending Lee to the national finals in just its second year of Division II competition. The Flames will join wire-to-wire leaders Barry and defending national champions Rollins in Findlay, Ohio, from May 17-20 after overcoming a team with four golfers ranked in the top 25 nationally, the highest concentration of any team in the South Super Regional field.

Lee freshman Anne Hedegaard saved par with an expertly-placed third shot on the par-four 18th. Her approach came to rest on a steep embankment just in front of the green. Hedegaard pondered the shot for several minutes before settling on a strategy.

She stood with her left leg well above her right on the slope, choked up by a foot on her putter, and rolled the ball over the crest. It broke left and settled 10 feet from the cup on a green that gave golfers fits all day. She sank the ensuing par putt to help the Flames to a one-shot playoff victory and a finals bid.

“I’ve never hit anything like that before,” Hedegaard said. “I was a little nervous about it because I knew it was pretty important for us to get a par in order to win, so I choked down and just tried to do my best.”

Anne Hedegaard hit a CRUCIAL shot choked up on her putter that helped her save par. Hear from the @LeeUFlames star #NCAAD2 pic.twitter.com/OIF1mSqY5U

Hedegaard and the ninth-seeded Flames started the day in fourth place but surged past Saint Leo and into the tie with Nova Southeastern thanks to an 18-over 306.

Lee continues its run as one of the hottest teams in all of women’s golf; the Flames won their first three tournaments of the spring, finished second in their next two, and head to Findlay with Wednesday’s third-place effort. The Flames have made the postseason in both of their seasons as Division II members and are advancing to their first NCAA championships.

While Lee had the day’s most dramatic finish, Rollins had the most impressive team outing. The Tars, whose six Division II championships are the most of any women’s golf program, shot a tournament-low 300 to move from a tie for fifth into sole possession of second. Three players shot 73 or better on the day, led by an even-par effort from Lexie Toth.

“We showed a lot of resilience this week even though we didn’t play very well,” said Rollins head coach Julie Garner. “We had a great conversation last night about what it would take today. We were convinced that you don’t have to set course records, but you can’t beat yourselves. It was great to put ourselves into position to have happen what happened.”

The model of consistency throughout the tournament, top-seeded and No. 1-ranked Barry led the tournament start to finish on its way to a five-stroke victory. The Buccaneers will vie for their first national championship after winning the first Super Regional in program history.

The top three players on the leaderboard each advance to the national finals as individuals. Tampa freshman Kiira Riihijarvi, the first golfer in school history to advance to the postseason in the Spartans’ sixth year of competition, shot a school-record 70 en route to winning her first career tournament.

“I just felt really confident today,” Riihijarvi remarked. “I felt good. I was enjoying the round. The pin placements were really tough, but I putted well and that helped me a lot.”

Riihijarvi’s 2-under 70 was the best round by any golfer in the tournament and capped a comeback from 14th position after Monday’s first round. Brittany LaPadula of Florida Tech was hot in pursuit, shooting a 1-under 71 to finish in second place two strokes back. LaPadula was named the individual medalist on a scorecard playoff at the Newberry College Regional Preview, held on the same Members Club at Woodcreek course Oct. 31-Nov. 1.

The nation’s top-ranked golfer, Marie Coors of Saint Leo, fired a final-round 75 to claim the third slot and earn a bid to the national finals. She also advanced as an individual in 2014. Coors is the only Division II golfer that averaged below par per round this season.

Wednesday marked the final chapter in the storied career of Tusculum head coach Bob Dibble, at the tournament with individual competitor Ciara Rattana. The Pioneers’ leader started Tusculum’s women’s golf program 20 years ago and has been with the school for nearly three decades, racking up 21 tournament wins, two South Atlantic Conference championships, and a team NCAA Tournament appearance with the women’s program.

Dibble also won 44 tournaments with the Pioneers’ men. He will be inducted into the South Atlantic Conference Hall of Fame June 1.

Riihijarvi, LaPadula and Coors will join Barry, Rollins and Lee in Findlay, Ohio, for the NCAA Championships beginning next Wednesday.