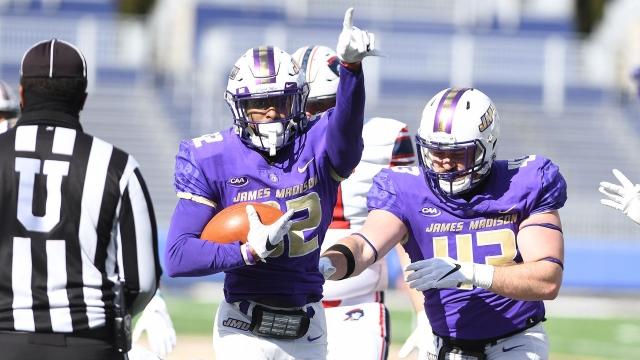 INDIANAPOLIS – The Division I Football Championship Committee released a top-10 ranking on Thursday, April 1. The announcement was revealed during ESPNU’s 7:30 p.m. ET broadcast of the Kentucky vs. Mississippi State baseball game.

Using selection criteria and results through games played on Sunday, March 28, James Madison of the Colonial Athletic Association earned the top spot in the nation with an unblemished 4-0 record. The defending national champion North Dakota State Bison (5-1) and South Dakota State Jackrabbits (4-1) both representing the Missouri Valley Football Conference followed in second and third place, respectively. The Southland’s Sam Houston (3-0) was selected fourth while the MVFC’s North Dakota (4-1) and Weber State (3-0) of the Big Sky Conference tied for fifth place to round out the top five slots.

“With only a few weeks left before Selection Sunday, during a unique year with both fall and spring competition, this top-10 reveal is a great way to highlight FCS Football.” said Kyle Moats, chair of the committee and Director of Athletics at Missouri State University.

“The ranking provides a snapshot look at potential teams competing for top seed positions in the upcoming 2020 FCS Championship.” said Moats. “As a committee, we’ve had robust conversations and look forward to the many football games left to play, along with additional discussions with our regional advisory committees, to continue to evaluate the teams that we feel have already built impressive resumes.”

The reveal is based on the criteria used to select and seed teams for the Division I Football Championship. At any time during the process, the committee may consider comparative data of individual teams, including but not limited to overall record, record against Division I opponents, record against opponents from other automatic qualifying conferences, record against Football Bowl Subdivision (FBS) opponents, head-to-head record, common opponents’ record, FCS Coaches Poll, NCAA Simple Rating System data and input from regional advisory committees.

The announcement is part of the continued team assessments that will culminate with the final bracket, revealed during the selection show on Sunday, April 18, at 11:30 a.m. ET on ESPNU.

The 2020 championship field will consist of 11 automatic qualifiers and 5 at-large qualifiers. Fall competitions will be considered when determining the field for the spring championship.

All rounds of the FCS playoffs will be broadcast on ESPN’s family of networks with first-round games taking place Saturday, April 24 and concluding with the national championship game at Toyota Stadium in Frisco, Texas, Sunday, May 16, at 2 p.m. ET on ABC.