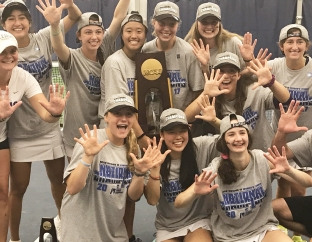 CHATTANOOGA, Tenn. — The road to national title No. 10 was longer, more winding and at times seemed even seemed less likely than some of Williams women’s tennis’ more recent championships, but the thrilling journey came to an appropriately climactic conclusion Wednesday, when the Ephs defeated Emory 5-4 in the DIII national championship dual.

Wednesday’s matchup marked the third straight season the two teams have met with the title on the line. Both of the Ephs’ two most recent encounters with the Eagles in the national championship resulted in 5-4 decisions, first for the Ephs two years ago in the 2015 title tilt and then for the Eagles in the 2016 finale.

It was only fitting then that the 2017 NCAA championship would be decided by the same margin, with a three-set match between two of the best Division III singles players in the country to determine who would win the National Title.

After a rocky start for the Ephs’ Juli Raventos, faltering 6-1 in the opening set against the Eagles’ Bridget Harding, the junior came back firing in the second. Raventos established an early lead, and with the second set on her racket at 5-3, the Northeast’s second-ranked singles player made no mistake closing out the set to force a decider.

With the tide of momentum shifting in the Ephs’ favor, Raventos picked up in the third set, right where she had left off at the end of the second, again orchestrating an early lead to put all the pressure on the Atlantic South’s top-ranked singles player. Down 3-1, Harding held her serve to pull within one game of Raventos, only to see her purple and gold counterpart do the same to reconsolidate her two-game advantage a few minutes later.

With the pressure firmly back on the shoulders of the Emory junior, Raventos crafted a break point in the next game, and converted it with an explosive, cross-court forehand winner that won the Eph her second break of the third set and a chance to serve for the 2017 NCAA team title.

Raventos was at her most ruthless in the final game, and made no mistake on match point, whipping an inside-in forehand approach shot before coolly placing the subsequent volley into the open court, cuing deafening cheers from the Eph players and fans alike, as both celebrated the purple and gold’s 5-4 triumph and their 8th National Championship in the last decade.

“This [NCAA championship] in particular is really special,” Williams coach Alison Swain said after winning her eighth NCAA title. “To play two 5-4 matches two days in a row, (it’s) incredible. Everybody was ready, every single person. And it takes a lot to get to that preparedness, especially after our match yesterday. I couldn’t be more proud of my players.”

The Ephs claimed the first two doubles matches off the court, first through Julia Cancio and Emily Zheng’s 8-5 win over Paula Castro and Michelle DeMeo on Court 3, then through senior co-captain Hannah Atkinson and her partner, first-year Chloe Henderson’s, 8-4 win over Michelle Satterfield and Daniela Lopez on Court 2.

Williams had a chance to take a commanding 3-0 lead into singles, but Raventos and her partner, semifinal hero and Williams senior co-captain Linda Shin, couldn’t close out their match when they were serving at 7-6, squandering all four of their match points on Shin’s serve, including an overhead that Raventos sent long of the baseline.

The top-ranked doubles pairing in the Atlantic South, Harding and Katarina Su, proved to be unforgiving of the two Ephs’ errors, and they eventually managed to hold serve. With the match level again at 7-7, the Emory pairing took over, and grinded out wins in the next two games as well to put some wind into the Eagles’ wings heading into singles.

“It’s always disappointing to lose the last doubles match going into singles,” agreed Swain when asked about how that affected her team’s transition into singles. “But we’ve worked all season on clean-slating it going into singles. The girls did a good job with that today, not thinking too much about it.”

Only briefly ruing their missed opportunity to go up 3-0, the Ephs were judicious in quickly shifting their focus ahead toward singles, where they required three wins.

The first two matches off the court saw the two teams trade points.

First, Castro drew Emory level with Williams in the dual with her win over Cancio on Court 6. The Eagles senior outlasted Cancio in the first-set tiebreaker 7-2 and then made things easier for herself in the second set, closing out the match 6-3 to get the Eagles on the board in singles.

Just minutes after the conclusion of the match on Court 6, Mia Gancayco celebrated her 21st birthday with a win of her own on Court 5 over Melissa Goodman. The junior renewed the Ephs’ one-point advantage with a 6-3, 6-2 win over Goodman to pull the Ephs to within two points of clinching the title.

Emory won the next two matches, however, as both Williams senior co-captains fell 6-4, 6-4 to their respective opponents.

Close to winning its third NCAA championship in the last four years, Emory needed only one of the remaining matches on the top two courts.

The Ephs had other ideas, however, as Leah Bush, who had thus far struggled in the 2017 postseason, asserted herself on the grandest of stages.

Though the Williams sophomore missed her chance to close out the opening set on Court 2 against Michelle Satterfield when she was serving at 6-5, she quickly made amends in the tiebreaker, producing some magic of her own at 4-4 to win Satterfield’s service point. With two serves at 5-4, Bush was near-perfect at closing out the set this time around, winning both of her two service points to take the first-set tiebreaker, 7-4.

Riding the wave of momentum, Bush opened up an early lead in the second set with a break of Sattefield’s serve, before the Emory senior could gather herself after her first-set setback in order to mount a response. Though Satterfield broke back on Bush’s serve at 3-1, the energetic Eph sophomore was undaunted, and proceed to break Satterfield again in the very next game, before consolidating it with a service hold to pull within one game of winning the match.

Satterfield had it all to left to do, but Bush proved to be too much for her, as the Eph sophomore didn’t wait until her own service game to clip the wings of the Eagle senior, breaking Satterfield’s serve for a third time in the second set to level the overall dual at 4-4.

From there, it was all down to Raventos, who more than made up for her doubles mistake, clinching the 2017 NCAA team title with a three-set win over Harding.

“Both Leah and Juli wanted to step up in singles, and they did exactly that,” Swain said. “They didn’t let, in Leah’s case, yesterday or, in Juli’s case, doubles today affect their singles play, and they were both just incredible.”