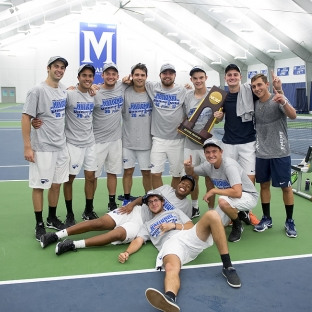 The No. 2-ranked Emory men’s tennis team captured the program’s fourth-ever national title Wednesday evening, defeating No. 3-ranked Claremont-Mudd-Scripps in the finals of the NCAA DIII championships. The Eagles won their 14th straight match and closed out their season at 22-4 following a 5-2 victory over the Stags who finished at 32-4. The match was played at the Strang-Voges Tennis Center on the campus of The McCallie School in Chattanooga, Tennessee.

Emory jumped out to a commanding 3-0 lead after sweeping the doubles portion of the competition. The Eagles’ No. 2 team of junior Max Renke and Adrien Bouchet pocketed the first point of the match with an 8-6 decision over Jake Berber and Glenn Hull. With the score tied at 6-6, Renke and Bouchet broke the Stags’ serve to take a one-game lead before holding serve to post their 17th win of the campaign against eight defeats. Shortly after, the No. 3 tandem of junior David Omsky and sophomore Jonathan Jemison dispatched Jake Williams and Julian Gordy, 8-1, upping their season slate to 23-7 while providing Emory with a 2-0 advantage.  At first doubles, junior Scott Rubinstein and sophomore James Spaulding won the final three games against Nikolai Parodi and Daniel Morkovine, breaking the Stags’ duo twice, in coming away with an 8-6 victory, which raised their record to 20-10 on the year.

CMS got on the board at six singles when Alex Brenner manufactured a 6-4, 6-1 triumph over Rubinstein. The Eagles inched closer to the national crown when Jemison’s 7-6, 6-2 decision over Hull at No. 2 gave them a 4-1 cushion. The win was Jemison’s ninth straight and improved his overall singles mark to 26-5, 21-4 in the spring. The Stags stayed alive and drew to within two points when Nikolai Parodi topped Aman Manji at No. 1 singles, 4-6, 6-2, 6-3, ending his 11-match win streak. With the three remaining singles matches all in third sets, Emory finally claimed the title when Bouchet clawed his way to a 5-7, 6-1, 7-5 verdict over Morkovine at No. 3, breaking at 5-5 and then holding. It was Bouchet’s 11th consecutive win and raised his overall record to 19-6, 16-5 in the spring.

It is the third national championship won by Emory athletic teams during the 2016-17 school year (men’s swimming and diving & women’s swimming & diving) and the 23rd overall for the department.

With the team portion of the championships completed, the Eagles will have four representatives in the singles and doubles championships.  Manji, the No. 2 seed in the 32-player field, will battle Bowdoin College’s Luke Tercek in a first round match on Thursday morning, while Jemison matches up against No. 7 seed Kai Yeun Leung of Skidmore College.  Rubinstein and Spaulding will compete in doubles as the No. 3 seed out of 16 tandems and meet Skidmore’s Leung and John Wynne on Thursday afternoon.