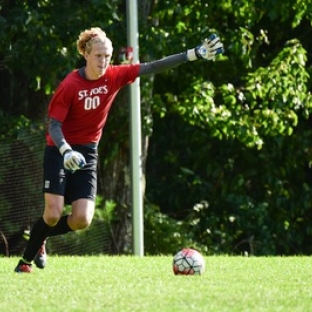 DIII men's soccer: St. Joseph's didn't allow a goal until the 1,803rd minute of its season

For 19 games this season, the St. Joseph’s College of Maine men’s soccer team walked an unimaginable tightrope: through all 19 games, the Monks didn’t cede a single goal. They scored 65 on their opponents. Their defense was, literally, perfect.

On Saturday, in the 73rd minute of the Monks’ first round win over Mitchell College in the Division III tournament, a ball finally crossed the St. Joseph’s end line. The longest shutout streak in NCAA history — 19 games, breaking D-I Santa Clara’s 18-game shutout streak from the 1998 season — was over. It had lasted 1,803 minutes.

Thirty hours is a lot of time to be perfect.

All year long, the Monks were one of the best soccer teams in the country, not just in D-III, racking up an effectively spotless 18-0-1 regular season record. The only partial blemish came in a 0-0 draw against Norwich on September 16; junior keeper Blake Mullen made seven saves that day, a season high. He only had to make 35 saves in the team’s other 18 games, but he made every single one.

Eight times this season, Mullen left the pitch early because his team was so in control of the game, giving playing time to freshman David Walbridge. Mullen set an individual goalkeeper record of consecutive scoreless minutes, clocking in officially at 1,706:09, an astounding figure in its own right.

And then, because sport, like perfection, is a fragile beast, it was all meaningless with 13 and a half minutes left in a first-round tournament matchup against a team with nine wins. After so much infallible soccer since September 1, the Monks’ season was feeling the squeeze.

(In a quirky twist of fate, the goal which broke St. Joseph’s incredible streak was the first of Mitchell freshman Quinn Outerbridge’s career.)

Thankfully for Mullen & Co., they held on and escaped with a win, which was technically the first tournament win in St. Joseph’s program history. The Monks beat Babson last season, but because it came in penalty kicks, the decision went down as a draw.

The Monks’ next opponent is Tufts. The Jumbos were nearly St. Joseph’s defensive peer this year, scoring 40 goals and allowing just one; the one came in a 1-0 loss to Amherst…

What will St. Joseph’s do without perfection on the line? They ought to be ready for this moment, at least: they had 30 hours to think about it.