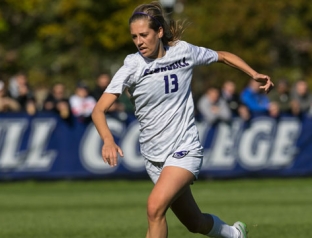 The Stonehill College women’s soccer team put together one of the program’s best seasons in 2016.

The Skyhawks, picked to finish 12th in the Northeast-10 Conference, won their first tournament championship since 1995 and made it to the NCAA Division II tournament for the first time.

Stonehill was bolstered by a strong senior class of 10 players, led by Jamie Block, a second-team All-America goalkeeper who had 10 shutouts and a 0.85 goals against average.

With 17 returning players and 10 freshmen, the Skyhawks will look to build on that success this fall.

Stonehill opens the season by hosting the East Region Crossover Challenge at W.B. Mason Stadium. The Skyhawks play the New York Institute of Technology on Friday at 4 p.m. and Nyack College on Saturday at 3 p.m.

“It’s really important (to build on last year),” said coach Alex Wilson, now in her fifth season. “Obviously it had been 21 years since Stonehill had won a championship and we certainly don’t want it to be a long time before we get another one.

“The ladies have that mentality to go out and continue to prove us right and work hard and get back to the postseason.”

The Skyhawks then lost to American International College, 3-1, in the NCAA tournament.

Stonehill will have to fill voids left by Block, who had 20 career shutouts and is now an assistant coach for the Skyhawks, along with top scorer Lauren Kapatoes (eight goals), defender Claire O’Brien and midfielder Brianna Duserick.

Block made the All-East Region first team, O’Brien and Duserick were picked on the second team and Kapatoes earned a spot on the third team.

“When you look at it on paper, it might be daunting to see the number of players we lost, especially because of how they impacted on the field,” said Wilson, whose team is picked to finish fourth “But they left so much for this program to build on mentality wise that these freshmen have come in looking to fill those roles and they know what it is to be a Stonehill soccer player.

“With the championship mentality coming from last season and a lot of great values and culture that was built, I think the 2017 squad is ready to take that and make it their own.”

The offense should be led by captain Meredith Moore, who was second on the team with six goals and 13 points a year ago, and sophomore Nicole Geraghty of Bridgewater, who made the all-rookie team after scoring four goals.

Other key returning players are Courtney Campo, a midfielder who made the all-conference third team, captain Taylor Shannahan, and juniors Erin O’Brien and Emily Scollard.

Three players are bidding for playing time in net, including junior Catherine Klein and sophomores Jennifer Wheaton and Kaitlin Brown.

“We’re definitely optimistic,” said Wilson. “From what we’ve seen in the preseason and scrimmages, it’s progressively better every day.

“I think it’ll be a different style, a technical group. It’s just about putting all the puzzle pieces in the right space so we can get some wins.”

This article is written by Jim Fenton from The Enterprise, Brockton, Mass. and was legally licensed via the Tribune Content Agency through the NewsCred publisher network. Please direct all licensing questions to legal@newscred.com.