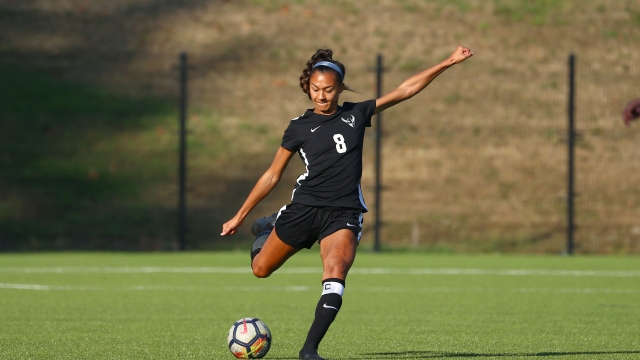 The Western Washington women’s soccer team saw its 39-game winning streak come to an end the last weekend of the regular season, but one streak remains intact. The Vikings are DII soccer’s road warriors.

Western Washington is 17-0-1 on the road the past two seasons, a perfect 10-0 in 2017. This team has lost just one game in two seasons, but what’s most impressive is that the Vikings have done most of their winning away from their Bellingham, Washington home. This is a team that needs to take a bus two hours just to get to the airport for their cross-country travels.

Take a look at these numbers complied by Western Washington’s SID Jeff Evans:

“Planning the logistics ahead of time is critical,” head coach Travis Connell said. “Lodging, meals, meetings, trainings, transportation and events are all set up in advance so that we can concentrate on game preparation during the trip. We have a phenomenal travel coordinator, and our coaching staff and athletic trainer have a really good understanding of how we want the trips to go. Traveling and eating together does give us opportunities to interact with our players in a more casual environment which can be very beneficial.”

Connell has been lucky over the years. He knows that that much time together, often in confined situations, can have negative effects just as easily as positive ones.

“When a team spends all this time together on the road it can go one of two ways,” Connell said. “They can start to drive each other crazy or they can grow closer. I give a lot of credit to our players, past and present, for making the most of this time together and understanding that it is an opportunity to grow closer and make our team better. This is a culture that has been passed down from previous teams and continues today.”

Shugarts is the leader of one of the best defenses in DII women’s soccer.

Senior defender Sierra Shugarts has spent a lot of time on the road with Western Washington. The reigning DII Player of the Year — just the second defender in the history of the award — has earned enough miles to own her own airport after four years on the road with the Vikings.

“Being on the road allows you to get to know other players who you may not know as well,” Shugarts said. “Our room assignments change every time, which gives everyone an opportunity to get to know a new teammate. Having a friendship off the field speaks volumes for the chemistry you see on the field. I’ve been playing with Emily Webster and Ashley Homer for a while now and each year, I’m sure we would all say that, our level of soccer is enhanced when we are all out there together. It creates a sense of comfort and trust.”

Part of being a successful college team, in any sport, is how well a team handles games in unfriendly confines. It’s part of life for a student-athlete. Western Washington, however, isn’t simply traveling to nearby cities, they are crossing borders.

“We have a motto,” Connell said. “‘We will play anybody, anytime, anywhere’. This statement is a trigger for our players that puts them into the correct competitive mindset. We have players that are able to block out distractions, block out everything so they can concentrate on finding a way to perform well in whatever environment they find themselves.  Playing a lot of games on the road and dealing with all that entails helps us cultivate and reinforce this competitive mindset.”

Raise your hand if you are the #GNACWSOC Player of the Year… oh, OK @sierrashugarts, we agree. pic.twitter.com/EtACwND65t

“I think the team has been so successful on the road because we don’t use that as an excuse to not perform,” Shugarts added. “We are all very talented soccer players and being a great team means that we have to perform on the road to get to where we want to be. Even if we beat teams 1-0 and nothing was going our way, any win on the road is a huge victory for our team because playing on the road is extremely tough and so much is factored in against your favor.”

Like playing one game in two different countries. In the same day.

“Last year during our warm-up for our conference championship game in Burnaby, BC Canada, the referees decided the fog was too thick to play, so after an hour delay they decided to move the game to another field across the border in the Washington. Three hours later we kicked off in another country. The players took it in stride. No questions or excuses. Instead they went out and won the game.”

Life on the road isn’t all bad, however. These student-athletes, especially those in the far reaches of the west coast, get the opportunity to see and go places they may otherwise never have.

“My favorite part about road trips would have to be the change of scenery,” Shugarts said. “Having those opportunities to experience different cultures and play against some of the best teams in the country is an experience you can’t get enough of. We are beyond blessed to have these opportunities. My least favorite part would have to be missing school. It gets tricky knowing that you might miss two or three weeks of school for postseason play and that’s when finals are right around the corner.

“My favorite place I have traveled over the years would have to be the [national semifinals]in 2015 to Pensacola, Florida. We stayed in amazing hotel and it was right on the beach and it was the first time in awhile the program had made it that far in the tournament, which made the experience even better.”

W: @WWU_WSoccer will face Seattle Pacific in the #GNACWSOC semifinal Thursday at 4 pm in Portland.

So here the Vikings are, once again ready to hit the road and head to Portland, Oregon for the Great Northwest Athletic Conference tournament. Through all the miles, and all the wear and tear, Connell never had a doubt in this team.

“Last September I knew we had a good team, but there are a lot of good teams out there,” Connell said. “It is incredibly difficult to win on a consistent basis in our conference and in our region. This has been a great run and it wouldn’t have been possible if we hadn’t played against other great teams from our conference and region that pushed us to be the best we could be.”

Thus begins Shugarts final quest for postseason glory. The All-American defender got a late jump to 2017 after breaking her toe in the offseason playing with the women’s Sounders. Despite the slow start, the Vikings persevered. When it’s all said and done, the miles travled, the trophies won and the accolades earned are the last thing on the superstar’s mind.

“Coming off of a season like last year is tough,” Shugarts said. “It’s a lot of pressure for a competitive player like me. Although I won a lot of awards last year and was able to lead my team, breaking my toe forced me to find different ways to be a leader off the field. My goals have changed and even though awards give you validation in your success, what my teammates and coaches think of me is way more rewarding than any title. I want to leave Western and look back at how many lives I’ve touched and how many people I have influenced to be the best player, leader and most importantly, the best version of themselves.”

And hopefully, a lot fewer days on the road.