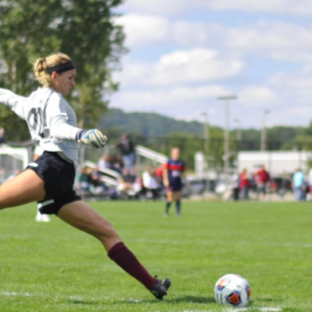 KUTZTOWN, Pa. – Behind yet another shutout in the net from freshman goalkeeper Madeline Smakulski, IUP women’s soccer upset the No. 2-ranked Kutztown Golden Bears 1-0 in a road match on Sunday afternoon.

The Crimson Hawks handed Kutztown its first loss of the season and ended its streak of 13 straight wins. Today’s win is believed to be the highest ranked opponent they’ve defeated in the 24-year history of the program.

Kutztown was ranked first in Division II a week ago, but bumped back one spot in favor of an undefeated Central Missouri team in the latest national rankings earlier this week.

GAME OVER! UNDEFEATED NO MORE!!!!

The win was the fifth straight for the Crimson Hawks, who improved to 9-4 overall and 8-4 in the Pennsylvania State Athletic Conference. Their 24 points on the year is currently sixth in the league standings, one back of fifth place Seton Hill (10-4-1, 8-4-1). Kutztown still sits on top of the conference with 33 points, owning a 13-1 overall record and an 11-1 mark in the league.

IUP employed its usual control possession game plan and picked up an early goal from sophomore McKenna Keffel in the 32nd minute, her third goal of the season. The early goal in addition to the Crimson Hawks’ smothering defensive style took Kutztown, which entered the contest averaging 3.4 goals per match, out of its game plan.

The Golden Bears tried to get back into the game by assaulting the net, especially in the second half, outshooting IUP 22-11 on the day. Kutztown had 17 total shots in the final 45 minutes alone, including 10 over a 13 minute span late in the match.

Smakulski saved seven shots and posted her sixth straight shutout of the season in just seven starts in the net. The true freshman has saved 25 straight shots and hasn’t allowed a goal since August 31, the Crimson Hawks’ season opener. Smakulski leads the PSAC in goals against average (.281), save percentage (.933) and shutouts (six).