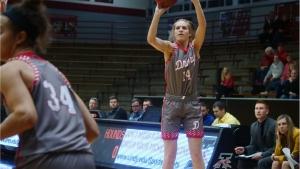 
Drury, Ashland and Texas A&M-Commerce continued their undefeated runs and in turn, stayed locked in at the top three spots of our DII women’s basketball Power 10, respectively. A few losses however, shook up the bottom half of the latest rankings.

This week, we will be adding a new feature to our Power 10. Since we are now well into conference schedules, we can start to see how those first regional rankings may unfold come Wednesday, Feb. 19. I’ll take a guess each week at who the top seed could be in each of those regions. So, how did we get to these rankings?

In case you are new to the DII women’s basketball Power 10, here’s what you need to know. These are my rankings, and mine alone. I used some of the same criteria the selection committee uses come NCAA DII tournament time: toughest schedules, wins against ranked opponents and average margin of victory, just to name a few.

Be sure to check back every Monday through the end of the season to see how the Power 10 unfolds.

(Note: All records and stats through games played Sunday, Jan. 26)

No. 1 Drury | 19-0 | Previous: 1
What else can be said about this team? The Panthers are deep and experienced, and have been through a long undefeated run before. Hailey Diestelkamp is one of DII women’s basketball’s best, averaging 18.3 points and 7.0 rebounds per game but this team has 11 players contributing significant minutes on the court. The Midwest regional tournament is going to be one for the ages.
This week: Jan. 30 vs. Missouri S&T; Feb. 1 vs. Maryville

ALL-STATS STARTING FIVE: Take a look at this lineup of box-score stuffers

No. 2 Ashland | 19-0 | Previous: 2
Not only are the Eagles beating teams with one of the best offenses in DII women’s basketball, scoring 90.6 points per game, they are handling opponents with ease, winning by an average of 27.4 points for the best mark among Power 10 teams. Freshman Annie Roshak continues to be an X-factor, breaking out as a spark off the bench and contributing 10.1 points per game.
This week: Jan. 30 vs. Ferris State; Feb. 1 vs. Lake Superior State

No. 3 Texas A&M-Commerce | 19-0 | Previous: 3
The defense continues to be the key for the Lions, allowing just 52.7 points per game, seventh-best in DII women’s hoops. Alexis Bryant leads the way with averages of 11.0 points, 8.1 rebounds and 1.6 blocks per game but this is a team effort. The Lions have a huge test against the defending champs this coming week.
This week: Jan. 30 vs. Lubbock Christian; Feb. 1 vs. Angelo State

No. 4 Grand Valley State | 18-1 | Previous: 4
The Lakers are cruising, their one blemish a loss to Ashland earlier this month. But even in that loss we saw what we have come to know about the Lakers: this defense is nasty. Grand Valley State held that high-octane Eagles’ offense to a season-low 77 points and is fourth in DII women’s basketball, allowing a paltry 49.7 points per game. This team can dominate you with a 12.5 rebound margin and averaging more than 20 points a night off of turnovers.
This week: Jan. 30 at Purdue-Northwest; Feb. 1 at Parkside

DII BASKETBALL SHOWCASE: The complete schedule and how to watch

No. 5 Lee | 19-1 | Previous: 8
Chalk up another perfect week for the Flames, allowing just 99 combined points in their two wins. Lee has lost five games at home over the past four seasons, so the fact that the next four of five are in Cleveland, Tennessee, is a big advantage. Abby Bertram continues to pace this squad, leading the team in points (14.0 per game), rebounds (5.1) and assists (5.1).
This week: Jan. 30 at Mississippi College

No. 6 Indiana (Pa) | 18-1 | Previous: 7
Welcome the first school to show their presence in both the DII men’s and women’s basketball Power 10 rankings with their male counterparts coming in at No. 5. These Crimson Hawks are rolling, and their big three of Justina Mascaro, Natalie Myers and Lexi Griggs are a nightmare for opposing offenses — all three score more than 12 points per game on better than 52 percent shooting. The Pennsylvania State Athletic Conference has been IUP’s for the taking for some time, and that doesn’t appear to be changing.
This week: Jan. 29 vs. Seton Hill; Feb. 1 at Mercyhurst

No. 7 Lubbock Christian | 16-2 | Previous: 9
The Lady Chaps got back on track with two big wins this past week, posting a 22- and 23-point victory. But Lubbock Christian doesn’t have much time to celebrate having to head to Commerce, Texas, midweek. Maddi Chitsey and Allie Schulte continue to lead the way, combining for 27.1 points per game, but this is another team fueled by a stingy defense allowing just 56.0 points per game.
This week: Jan. 30 30 at Texas A&M-Commerce; Feb. 1 at Texas-Tyler

No. 8 Hawaii Pacific | 18-1 | Previous: 10
Read this quickly. The Sharks have a showdown with Concordia (CA) Monday night that could shake up both the West Region and the Power 10. Hawaii Pacific is one of the hottest teams in DII women’s basketball, riding a 14-game winning streak. This team can score, with five players dropping digits per night led by Starr Rivera’s 17.1 points per game. A win against the Eagles at the Shark Tank could propel the Sharks up a spot or two.
This week: Jan. 27 vs. Concordia (CA); Jan. 29 vs. Academy of Art

The next two picks are admittedly a bit more aggressive than other polls, but I stand behind them. Here’s my rationale.

No. 9 Central Missouri | 15-3 | Previous: NR
The Jennies are a perennial power, so it shouldn’t be surprising to see them in the Power 10. Sure, Central Missouri has three losses, but they came early in the season to very good teams. Since this team has found its identity, they are plowing through the MIAA, a perfect 9-0 and winners of their last 12 overall. Their last loss? A mere three-pointer to No. 1 Drury.
This week: Jan. 29 vs. Emporia State; Feb. 1 vs. Washburn

No. 10 West Texas A&M | 18-3 | Previous: NR
I know, a second three-loss team appears while several two-loss teams are still out there. But two of those losses came in the first two games, right after they lost Lexy Hightower, the reigning Lone Star Conference player of the year and someone I had pegged to be a finalist for the 2020 national player of the year. Since the Lady Buffs figured out how to play without her, they are 18-1. I had this team in the top 10 to open the season and with a big win over Lubbock Christian and riding a 10-game winning streak, this team is trending in the right direction once again.
This week: Jan. 30 vs. Western New Mexico; Feb. 1 vs. UT-Permian Basin

STAY UP TO DATE: DII women’s basketball news | All DII news at the D2 Hub | Join the DII newsletter

I expect there to be some debate this week with me putting two teams outside the WBCA top 20 into my Power 10. When I say these teams just missed, it may have been by the narrowest margin all season. Catawba picked up a huge win against Anderson (SC) this past week, leaving them just on the outside looking in. Fort Hays State and Alaska Anchorage both lost this week, dropping them from the top 10, but not very far at all. Keep your eyes on Benedict. This team is rising quickly for me.

Here are the teams to watch (in alphabetical order):

If the regional rankings were released today, here’s who I think would be the No. 1 team in each of the eight regions.