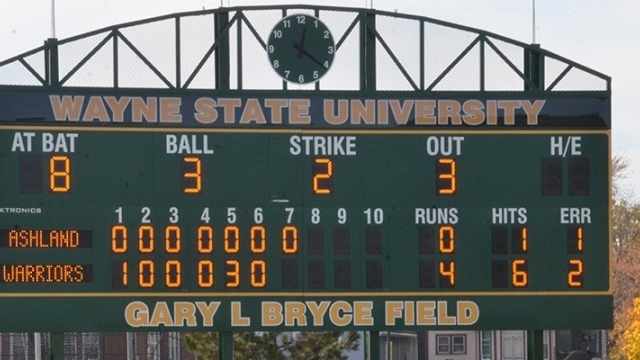 “I’m thankful that I can do both,” Butler said of being a dual-threat. “I would be a little bored if I only pitched. I like the excitement of both sides.

“It also keeps me really focused and into the game when I know there are two important aspects and not just one from a fielding position. I’m very happy I can do both, because it’s not every day pitchers can hit.”

Butler and her Wayne State Warriors advanced through their Midwest portion of the regional bracket, somewhat of an upset as the No. 4 seed. They defeated top-seeded Missouri-St. Louis twice in three tries to move on to this weekend’s Super Regional.

Butler was instrumental in each victory.

First, she pitched the eighth no-hitter of her illustrious career in a 3-0 win. Then, in an elimination game, with the score tied in the bottom of the sixth, Butler came to bat with the bases loaded. She cleared them with a triple, giving them a 3-run lead, then picked up her fourth save in the top of the seventh.

All-everything for #WarriorSB Lyndsay Butler talks about her no-hitter to power team over UMSL. pic.twitter.com/uQttTmbW43

“It’s funny actually,” Butler said. “When pitchers throw really high-rise balls I tend to chase them, even if they are extremely high. The count was 0-2 and sure enough, [Carly Kingery] got me on two extremely high balls. I’m getting anxious. I was like, ‘She’s going to throw me the same thing.’ So, I ended up working the count to two balls and she threw me a changeup and I sat on it and took it to right field.”

This is what it’s been like on the Detroit campus ever since Butler has arrived. Regionals, Super Regionals, the Championships — her Warriors have seen it all.

That’s just the expectation when one dons the Wayne State uniform.

“This year, we actually we didn’t have the greatest season in league,” Butler said. “What it comes back to is the determination of the team. We have a great group of girls that have a common goal. We want to make it far and go far in the post season. When the games really count and when the game is on the line, we have a lot of players who can step up and get us there.”

Another big reason behind the Warriors years of success is head coach Gary Bryce. The field in which the Warriors play is adorned wih their skipper’s name, as is the new scoreboard in the outfield.

That’s because Bryce is a legend in DII softball.

Bryce entered the history books this season when he recorded his 1,219th career win in a 16-0 victory over Lincoln University. While Butler didn’t pitch, she did homer in the historic game.

“It’s such a huge honor that we were part of the team that got him there,” Butler said. “He deserves it, he works so hard and does so much for all of us. He truly is a great coach. It was a really great feeling, we were really excited for him. We all took pictures and gave him a signed ball, it was a pretty big moment for him. And the scoreboard this year dedicated to him, and the field named after him. He’s got a lot of accolades.”

The one accolade both Bryce and Butler are missing from their resume is a national championship. While they surely have their eyes set on the DII championships, their task at hand is the Southern Indiana Eagles. The Eagles are a new team for Wayne State, as they are amid a program-best season. Midwest Region Pitcher of the year Jennifer Leonhardt is the ace of a team looking to surprise a few people this May.

“I don’t know much about them, but to be honest I think that’s a good thing,” Butler said. “I know we played UMSL again this year, so it’s a battle. We beat them almost every time, so now there is this expectation. We don’t know this team, we haven’t played them, so there isn’t any one individual that is going to be scaring from the get go, because I don’t know how they play. It’s like a fresh start and I can go in a pitch like I know how. I won’t be anxious about playing against certain players. I think it’s going to be a great series, it’s a great matchup.”

As Butler’s time comes to an end at Wayne State, she’s been able to reflect on what her five years as a Wayne State Warrior means. Though she will leave the program holding nearly every pitching mark — and several hitting marks as well — it hasn’t been about the numbers and numerous honors.

“Being a great player is definitely something to be remembered as, but I want to be remembered as a great teammate who left it all on the field,” Butler said. “I hope people recognize that I work my butt of during the year, and that I really strive to be a winner. I want our team to go far. I want to be known as one of those hard-nosed kids that goes out there and wants the program to be successful.”