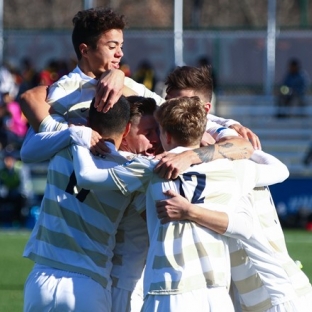 Charleston (WV) made it to the championship game in men’s DII soccer for the second time in three years in 2016, but fell to Wingate (NC), which won the first team title in school history.

While much of the preseason poll mirrors the final poll from 2016, there are plenty of new storylines for the coming season. Here’s a cram session on some teams, players and conference battles to watch for in the 2017 DII soccer season:

Wingate and its quest to repeat

Wingate had a 2016 to remember, as Gary Hamill’s squad captured the No. 1 ranking in October and never let go. The Bulldogs won the school’s first team national championship with its 2-0 win over Charleston. Despite losing Alex Nelson, the DII Player of the Year, the Bulldogs have plenty of championship experience, with seven returning starters earning South Atlantic Conference preseason honors. Wingate will look to build off an impressive 19-1-0 campaign and get back to the postseason.

Players to watch: Wingate wasn’t among the DII soccer scoring leaders, but that was OK because two-time All-American goalkeeper Pablo Jara posted a SAC-best .843 save percentage, fourth in all of DII. Senior forward Jon Ander, who led the Bulldogs with 30 points last year behind 10 assists and 10 goals, is back. Five of Ander’s goals came in the postseason, earning Most Outstanding Offensive Player at the championships. Senior forward Elma N’For, who was second on Wingate in points, also is back to give Wingate a formidable 1-2 punch on the front line.

Charleston has been one of the most dominating teams in DII men’s soccer for the past three years. Two finals appearances and a trip to the semifinals have made expectations in West Virginia sky high, coming off yet another successful season (19-3-2).

The MEC Men’s Soccer poll is out with @ucwv_msoccer at the top of the list. FULL STORY: https://t.co/jRY6i35xNi pic.twitter.com/47GQEUuU7N

This season, Charleston will face some new challenges. Long-time assistant coach Dan Stratford enters his rookie season as head coach. The Golden Eagles had five players record 21 or more points last season, and three of them are gone. They also have to worry about a much more challenging Mountain East Conference, with an up-and-coming Urbana and a Notre Dame College backed by Leonardo Paiva and his DII-best 25 goals.

Still, if history has shown anything, it’s that Charleston finds a way to go deep into December. The Eagles will likely find a way back once again.

Players to watch: The Golden Eagles begin and end with Will Roberts, who has established himself as one of the best in DII men’s soccer. The senior forward has had a fine career, averaging 20 goals and 47 points over his past three seasons. Junior midfielder Patrick Guier also returns. Guier was second on Charleston’s high-profile offense that finished second in DII with 3.25 goals per game. He assisted on 19 goals, tops in DII.

Will Rockhurst get the elusive semifinals win?

Head coach Tony Tocco has had Rockhurst (Kansas City, Mo.) knocking on the door for the past few seasons. The Hawks have been to the national semifinals three times in the past four seasons. With both the Great Lakes Valley Conference Offensive and Defensive Players of the Year returning, it should come as no surprised that Rockhurst is projected to win the GLVC for a second straight season. The Hawks have won at least 17 games in three of the past four seasons, going 18-3-3 last season. Depsite a tough GLVC schedule, there is little reason not to expect Rockhurst making another long playoff run come December.

Players to watch: Kaleb Jackson led the GLVC in goals (12), earning him All-American honors and the GLVC Offensive Player of the Year. The Hawks had a balanced offensive attack last season, with six players recording 13 or more points. Four of those players — Jackson, Gianluca Bottoni, Michael Panarisi, and Adam Michel — return. Rockhurst allowed a paltry 0.69 goals against last season. A large part of that was thanks to senior defender Connor Mullen’s strong play, earning him GLVC Defensive Player of the Year honors.

John Rootes has made Lynn (Boca Raton, Fla.) an SSC power since taking the helm in 2008. Five times the Fighting Knights have won the SSC Championship in that span, taking home the national championship in both 2012 and 2014.

Jack Watson had a superb debut for Lynn, leading the SSC in both goals (19) and points (44). He returns to the Fighting Knights along with second-leading scorer Alun Webb and senior keeper Alexander Roth, who led the SSC in goals against (15), save percentage (.797) and shutouts (8). Despite many new faces, it seems that Lynn would be the obvious choice to repeat as SSC champs.

The SSC has four teams represented in the preseason Top 25. Palm Beach Atlantic (West Palm Beach) tied Lynn with a 7-1-1 conference record last season, but it was Tampa who outlasted them all, ousting both from NCAA postseason play and earning the South region championship. Florida Tech (Melbourne) made its first NCAA postseason appearance last season since 1994, and returns 11 players who started throughout the year. The Panthers may be the lowest ranked of the bunch, but their experience could prove invaluable in one of the more heated conferences in DII soccer.

St. Edward’s (Austin, Texas) is coming off a record-setting season. The Hilltoppers won a program-best 18 games, including their first NCAA playoff victory. SEU, backed by one of the premier defenses in DII, placed two defensemen on the All-American list. Both — seniors Ty Mobley and Owain Hoskins — return, along with seven other seniors hungry to add more to Hilltopper lore.

The problem is Midwestern State (Wichita Falls, Texas) stands in its way. Last year was the Mustangs’ first as an affiliated member of the Heartland. Head coach Doug Elder led his team to a 13-1 conference record, winning the regular season in its first go. Midwestern State made it to the finals of the Heartland Conference tournament, where the Mustangs fell 2-0 in the title game.

The winner of that game, of course, was St. Edwards.

You can be sure Oct. 19 is marked on the Mustangs’ calendar, when the Hilltoppers come to town. Led by a defense nearly as stingy as St. Edward’s (a 0.65 goals-against-average that placed them eighth in DII), the Mustangs will be challenged to replace the 73 points left vacant by the departure of their four leading scorers. This may be a battle to the finish, much like 2016.