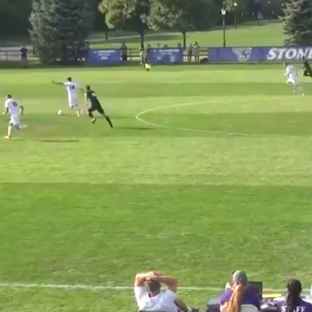 The Stonehill men’s soccer team got off to a nice start this season. The Skyhawks began their slate 3-1-1, before welcoming No. 3-ranked Adelphi to the Easton, Massacussettes campus. Projected to finish tenth in the Northeast-10, Stonehill had a real chance to make a statement on Tuesday.

Senior midfielder Connor O’Brien took matters into his own… feet.

O’Brien scored the eighth and ninth goals of his Stonehill career, getting the Skyhawks out to an early 2-0 lead against Adelphi. The first goal came on a free kick. The second was this bomb, making a nice move before launching one from nearly 40-yards out right over the keepers head.

We have an early candidate for goal of the year from @GoStonehill Connor O’Brien as he did this yesterday #SCtop10 #NE10EMBRACE pic.twitter.com/TF9ExqAmxU

O’Brien’s day would be all for naught as Adelphi rallied, scoring a late goal to remain undefeated on the season. You can see both of O’Brien’s big goals in the video below.