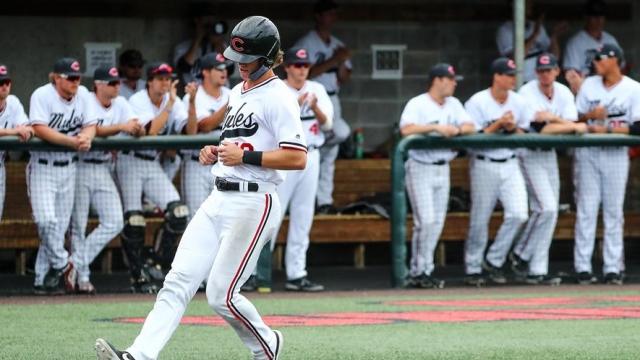 We made it. The final selection show of this unique and curious 2020-21 NCAA DII season is upon us. The DII baseball selection show airs at 10:00 p.m. ET this Sunday, May 23, on NCAA.com. We’ll know the 42 teams that will continue playing with aspirations of Cary, N.C. on their mind.

Eighteen teams already know their fate, entering the DII baseball bracket with an automatic bid thanks to winning their conference tournaments (some are still in progress as of this writing). That leaves 24 spots left to fill out, and thanks to some wild finishes in the conference tournaments, the selection committee will have their hands full trying to sort through who is in and who is out.

AQs: We tracked every conference champion for the DII baseball bracket

The final DII baseball Power 10 rankings of the regular season

From start to finish, Colorado Mesa dominated behind arguably the best offense in DII baseball and terrific pitching. Which means UC Colorado Springs deserves a shoutout: Colorado Mesa had just five losses, and the Mountain Lions were responsible for three. That includes two wins in the RMAC baseball tournament en route to their first-ever RMAC title. UCCS is heading to the bracket, and you have to assume the Mavericks earn the at-large bid as well, setting up a potential rematch.

And while we are on shoutouts, how about some love for Bloomsburg? The Huskies won their first PSAC tournament title in 54 years back in 2019. They won’t have to wait as long this time as they took down Seton Hill to win back-to-back PSAC tourneys. Bloomsburg’s automatic bid not only shakes up our rankings, but the entire Atlantic Region with Millersville, Mercyhurst and Seton Hill now hoping for an at-large bid.

That gives us a new No. 1 for the first time all season. The Mavericks were our preseason No. 1 and held the title up until right now. Remember, these are my rankings. I try to look at some of the same criteria that the selection committee will use for at-large bids Sunday evening. That said, there was a lot of differences in this season with the lack of out of conference and out of region play, so there is a recency bias here as well… the hot teams may keep themselves on the radar.

As an added bonus, we’ll take a look at the first-ever NCAA.com player and pitcher of the year honors as well.

1. Central Missouri: The Mules had been more of a 1B than the second-ranked team in DII, so our new No. 1 shouldn’t be much of a surprise. They are as balanced a team as you’ll find, hitting .345 with 78 home runs and 429 runs scored, while 13-0 Mason Green continues to lead a solid pitching staff with a tough bullpen behind him to close out games. When it is difficult to pick out the best hitter in a lineup, you have a scary team on your hands. That’s just what the Mules have with two everyday players — Dusty Stroup and Josh Schumacher — hitting over .400. Stroup hit another bomb in the MIAA clincher, his 19th of the season, to finish atop the MIAA in home runs.

2. Angelo State: West Texas A&M appeared to be staking their claim as the new kings of the Lone Star Conference when they took two of three from the Rams in early April. Angelo State responded by winning 18 of its final 20 games — most in dominating fashion — and yet another LSC tournament title — their fourth overall. Aaron Walters had an unbelievable season hitting .438 with nine home runs and 61 RBI, but let’s not forget Josh Elvir. Simply one of the best to ever put on a DII baseball uniform, Elvir hit .401 with 19 doubles, 11 home runs, 74 runs scored and 53 RBIs while going 14-for-17 in stolen bases.

4. West Florida: What a season for the Argonauts. The Gulf South champions were hanging around the Power 10 all season and ended the year with an impressive charge to lock up a spot in the bracket — the regular season ending sweep of Lee, and then an impressive 2-1 series victory over a very unheralded Delta State team in the GSC finals. Evan Floyd, Tyler Dowdy and Ryan Brewer make a challenging rotation for opponents while Dylan Menhennett leads a solid lineup with a .392 average and 21 extra base hits.

5. North Greenville: The offense has been there all season for the Crusaders, so if the pitching gets hot in May, we have a real contender in North Greenville. They thumped a very good Mount Olive team 15-1 to win the Conference Carolinas tourney. John Michael Faile had another amazing season hitting .438 with 21 home runs and 73 RBIs for a lineup that hit .358 with 78 home runs and 474 runs scored. While the bullpen has been solid all year, Logan Chapman and Zach Taglieri could be the X-factors if they can string together solid starts.

6. Minnesota State: We’ve been high on both these Mavericks and Augustana (SD) all season. Minnesota State took down the Vikings for their sixth NSIC title and in doing so, shoot up our Power 10. The pitching staff led DII in ERA for much of the season and heads into the tournament with a 3.03 mark. Jon Ludwig is the ace, posting a 1.93 ERA and 0.80 WHIP, but Collin Denk has been equally impressive with a 1.83 ERA and a 1.00 WHIP. Joey Werner continues to lead this offense hitting .439 with 12 home runs, but there are plenty Mavs that can hit up and down the lineup.

7. Tampa: We really wanted to see how the Spartans responded in the regular season finale against Florida Southern, but alas, the series was canceled. Still, Tampa finished the season 16-4 with some very good numbers. The pitching staff had a combined 3.18 ERA while the team hit .291 with a .402 on-base percentage. EJ Cumbo led the way at the plate with a .382 average and five home runs. Now it’s NCAA tournament time — typically the time when Tampa finds another gear and plays very well.

8. Azusa Pacific: The Cougars were a team we felt could be a big sleeper in 2021. They concluded their season by punching their ticket to the tournament, winning the PacWest and their last 10 games in a row. We hoped for a big bounce back season from Osvaldo Tovalin and he delivered, leading an explosive lineup with a .399 average and 13 home runs. AJ Woodall is who to watch on the mound: He led the rotation with a 7-0 record and a 2.15 ERA while striking out more than one per inning pitched.

9. Lindenwood: The Lions and Illinois Springfield represented the GLVC in the Power 10 all season, so it wasn’t surprising the two met in the conference championship game. The Lions scored five runs in the bottom of the eighth to erase a three-run deficit and capture the GLVC title and a spot in the Power 10. Mitchell Krebs leads an interesting lineup that can get the bat on the ball but lacks that game-changing power. Still, he hit .417 and got on base at a 50.7% rate for a lineup that can do both very well. The Lions have three ample starters in Tyler Cassmeyer, Blake Beckmann and Kyle Hentis that will make things interesting in regional play.

10. Seton Hill: This was a tough spot to pick. The Griffins lost their conference championship game, but still had a very good season, and that helps them cling to the final spot. Tommy Pellis powered Seton Hill to a 35-win season hitting .381 with 14 home runs, tied for the team lead with Derek Orndorff. The pitching was very good all year as well, posting a combined 3.13 ERA.

DII baseball player of the year: Haydn McGeary, Colorado Mesa — The past few seasons have produced some absurd seasons from Angelo State’s Josh Elvir and Delta State’s Zack Shannon — the previous two NCBWA players of the year — and McGeary’s season is right up there amongst the best. He’s flirting with a .500 average, heading into the tournament with a .488 average. He leads DII with a 1.006 slugging percentage and has a 1.515 OPS. While his 18 home runs doesn’t top his team, his 82 RBIs are second to none in DII baseball. Simply put, McGeary is a machine.

DII pitcher of the year: Zach Parish, Missouri Southern — This was hard. There were so many good pitchers this year, but Parish was something special. He finished with an 11-1 record, with his 11 victories third in DII. His 1.21 ERA was also third in the division, while his 0.84 WHIP finished 10th. Then there were the strikeouts. Parish finished with 136 on the season — third overall in the division — and became the DII strikeout king on May 8. There were many amazing performances this season, but the way Parish found his way into the top 5 of the most important categories gives him the edge.

DII freshmen of the year: