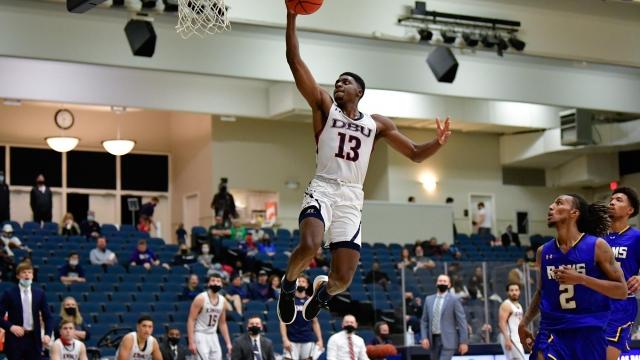 DII Report: The latest men's basketball Power 10 and what you missed this week

One week after five of the top six teams in the DII men’s basketball top 25 fell, a sense of normalcy returned to the court. Kind of.

Though there was an upset or two, the top teams returned to their winning ways as Colorado School of Mines rose to the No. 1 spot in the NABC rankings for just the second time in program history.

Because of the insanity a week ago, we decided it was time to update the DII men’s basketball Power 10 rankings, and will do so every other week moving forward until it’s tourney time. But we also want to make sure you didn’t miss anything else that happened on hardwood.

It’s that time. Kick your feet up, grab some coffee and get ready for this week’s DII Report.

If you are new to my Power 10 rankings, here’s a quick rundown of how they work. These are my picks, and mine alone. That means my Power 10 will probably have a much different look than the other polls. In the past, I’ve tried to stick as closely to the same criteria that the selection committee uses come tournament time, but this is a much different season. That said, there will be some recency bias in play, and if there was a tight line to draw, I went with the red-hot team.

No. 1 Northwest Missouri State — I’m going to be the contrarian here, but hear me out. Yes, the Bearcats have a loss on their record. But it came to an undefeated, top-5 team in DII and went down to the buzzer in overtime. They are literally one shot away from being undefeated. They have bounced back with three wins and I think maintain the title of “team to beat”.

No. 2 Colorado School of Mines — The Orediggers may be mad at me, sitting atop the NABC poll and a perfect 8-0, but they have been idle for a week and a half, and that is the ONLY reason I don’t have them at No. 1. I’ve spoken in depth about how I am a believer in this team. If you like the cliche “defense wins championships,” well Mines has defense by the boatload, allowing less than 60 points per game. They have depth in experience and talent as well as a true DII basketball star in Brendan Sullivan.

No. 3 West Liberty — Vroom, vroom. The Hilltoppers offensive engine is revving. They are averaging 112.8 points per game and have a top-25 win under their belt against a Fairmont State team I really like. In that said victory, six players reached double figures led by Dalton Bolon’s 20. Like last year, the Big Three are clicking as Bolon, Will Yoakum and Pat Robinson III are all averaging at least 19.0 points per game.

No. 4 Northern State —  The Wolves are 6-0 and look like an unstoppable force right now. They aren’t even playing their best basketball — which is a scary thought — and just keep winning. Parker Fox is a DII superstar and Mason Stark is the perfect compliment, scoring 16.3 points per game and shooting 52 percent from downtown.

No. 5 Lincoln Memorial — The Railsplitters rebounded from their first loss of the season with a 100-point performance to get back in the win column. Cam Henry (25 points, 12 rebounds) and Devin Whitfield (22 points) led the way as usual. This team can come at you in so many ways. Lincoln Memorial is still a very strong contender come March.

No. 6 Washburn — The Ichabods continue their very impressive season. They have one loss and it came at the hands of a very good top-25 foe, Missouri Western. They quickly rebounded with a pair of 20-point victories this past week. Tyler Geiman continues to build a player of the year resume with 19.5 points, 6.9 rebounds and 6.1 assists. This team rolls deep though and has plenty of players contributing on a nightly basis.

No. 7 West Texas A&M — The Buffs have a loss to a very exciting DBU team. They also beat that same top-25 team the night before. This is an odd season, and beating the same team — especially one as good as DBU — on back-to-back nights is no easy task. Qua Grant and Joel Murray are just beasts and both are amongst the best in the game, as two strong, athletic players that can take over a game.

No. 8 Colorado Mesa — It’s not to hard to put a 9-0 team in the top 10. The Mavericks are rumbling, winners of their last 12 going back to last season. Impressively, this team is led in scoring by a sophomore in Ethan Menzies (16.1 per game) and a freshman in Reece Johnson, who also does all his damage as one of the best reserves in the Division. Next Friday is a big showdown with Colorado School of Mines.

No. 9 Truman State — I had the GLVC pegged as one of the most fun conferences to watch and Truman is showing why. This past weekend, the Bulldogs avenged their lone loss of the season in a 72-47 romp of Maryville to get to 10-1. All five of Truman’s regular starters are averaging double-digit points and all shoot very well, shooting a combined 51.4 from the field. Dylan Peeters has been a beast, averaging a double-double per night.

No. 10 DBU — This may seem high, but the Patriots are more than deserving. They quickly avenged their only loss of the season to then-No. 3 West Texas A&M the very next night. I’ve been writing about Chandler Jones since his freshman of the year campaign and now he is playing like a legitimate DII superstar. He’s averaging 23.9 points per game while shooting 63.3 percent from the field and 52.1 percent from beyond the arc. He also leads the team with 8.5 rebounds per night and is averaging just about two steals per game. He alone doesn’t earn this team’s lofty ranking, but he certainly plays a large role.

9 things you may have missed in DII college basketball

Can we talk about the season Flagler men’s hoops is having? The Saints have already defeated the first two Division I schools in program history and this week, they upset No. 10 Augusta, 70-64. The last time Flagler defeated a top-25 team was in 2016 and the last time it defeated a top 10 school, you have to go all the way back to 2011. Jaizec Lottie led the charge with 30 points.

How about the big play for Findlay women’s basketball? Last Sunday, three — count them, THREE — players put up a double-double led by Sydney Kin’s 31-point, 14-rebound performance. She was joined stuffing the box score by Bridget Landin (17, 12) and Paige Bellman (16, 12). Kin is having a sensational season. That was her fourth double-double of the season and she had a 30-point, 19-rebound performance just two games prior.

The Southwestern Oklahoma State women’s squad is straight out balling. They moved to 5-0 and have eclipsed 90 points in each victory. Makyra Tramble is leading the way with 22.8 points per game and 10.3 rebounds per game. This team is deep with scorers though and has officially entered sleeper mode.

Did you see Lee men’s basketball this past weekend? The Flames gave you not one, but two opportunities to watch an upset as they took down No. 5 Valdosta State on Friday and Saturday. Qua Kennedy had 48 points and 14 rebounds over the two games, igniting the Flames… well, flame.

Have you tuned into the Texas A&M International women’s team yet? The Dustdevils are making program history each time out, starting from opening tip. They downed back-to-back Division I teams in a week’s time back in November and this past weekend set the program’s longest winning streak (currently at seven) and best start to a season, now 8-1.

Grand Valley State took the early season advantage over their GLIAC rivals, the Ashland Eagles, snapping Ashland’s 33-game winning streak in DII women’s hoops. This has become one of the better conference rivalries in recent years, and the Lakers moved to 1-0 behind a 73-68 victory. Four Lakers scored in double-figures, led by Brooke McKinley’s 20. Annie Roshak set a career high for the Eagles with 32 points. Round 2 is set for Sunday.

There have been quite a few players to join the 1,000-point club this season, but for Lenoir-Rhyne’s men’s team, it happened in back-to-back games. Darius Simmons eclipsed the mark on Wednesday and R.J. Gunn followed suit on Saturday.

No, you aren’t seeing double. Ferris State pulled off a fun feat as the leading scorer for the men’s team and women’s team each dropped 39 points on Saturday. Kadyn Blanchard dropped 39, going 15-for-15 from the charity stripe, while ripping down 10 boards in securing the women’s squad its first win of the season. On the men’s court it was Walt Kelser who did the deed, going an impressive 6-for-9 from 3.