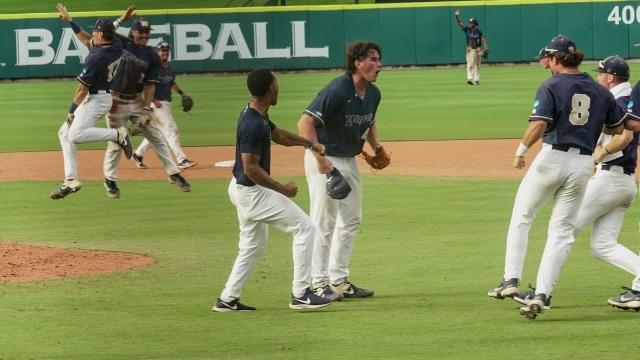 The DII baseball season is in the books, and with it, the end of this wonderfully weird 2020-21 NCAA DII season. Eight days in Cary, North Carolina ended, and the only flag left waving was Wingate, capturing its first national championship in a thrilling 5-3 victory over Central Missouri. And with the win comes the honor of sitting atop the final DII baseball Power 10 rankings of this 2021 season.

The Bulldogs were solid all season long, often hovering in the top 25 conversation, but always on the outside looking in on our DII baseball Power 10 rankings. That is no longer the case: Wingate jumps from the “also considered” category all the way to No. 1, the largest jump since we began doing DII power rankings in any sport.

Wingate was a team really trending in the right direction at the end of 2019 and looked good in the abbreviated 2020 season. But all that aside, the Bulldogs weren’t in our preseason top 25, nor considered a sleeper for Cary. Now, their championship game opponent? Central Missouri entered the season No. 3 in our preseason top 25 and never left the upper echelon of DII baseball, finishing the season No. 2 in the final power rankings of the season.

Keep in mind, these are my rankings. Making it to Cary doesn’t guarantee a team a spot in these final 10. When you look at a region like the South Central, there were three legitimate No. 1 seeds playing against each other, in Colorado Mesa, Angelo State and West Texas A&M. While the Rams advanced, it doesn’t lessen the seasons of their two regional adversaries.

Nor does this final ranking have anything to do with the future. Due to COVID-19, several teams were stacked with experience thanks to extra eligibility. This will drastically change the landscape of DII college baseball in 2022. Fear not, we’ll revisit what next season’s top 25 could like after the smoke clears, the MLB draft goes down and we have more of a sense of what rosters will look like.

1. Wingate | Previous — Also considered: What a season for the national champs. The Bulldogs finished 39-13, winning 13 of their last 15 games. This run featured victories over then-No. 7 Catawba, then-No. 19 North Greenville, a pair over then-No. 11 Mount Olive, and then five straight elimination game victories over top-15 opponents, including downing former No. 1 Central Missouri for the title. Logan McNeely (.359, 1.004 OPS, 17 doubles, four home runs, 50 RBIs) and McCann Mellett (.328, 1.098, 16 doubles, 12 home runs, 50 RBIs) led a consistent offense, but it was the pitching that saved the day in Cary.

Aside from a 5-1 victory over Seton Hill, every victory in Cary was a nail biter, with Wingate winning three one-run ball games and then the two-run victory in the finals. It started with a bulldog performance from Brody McCullough, going eight innings to defeat Southern New Hampshire, followed by a complete game from David Nash to eliminate Seton Hill and then 7.1 innings from Austin Mitchell. That left the bullpen fresh for the decisive semifinal game against Angelo State and also left Sam Broderson’s arm unused. Broderson’s heroic five innings in the final — in which he didn’t allow a hit or a run — propelled the Bulldogs to their first title.

2. Central Missouri | Previous — No. 1: This Mules squad has quite the impressive resume. They reached the semifinals in 2019, ran off a 20-3 record in the shortened 2020 season, and then were utterly dominant in their run to the championship game in Cary. For a team to enter this season at No. 3 — in a season with so much uncertainty with the long layoff and delayed start, mind you — speaks volumes of the culture head coach Kyle Crookes has created in Warrensburg. This offense — led by Dusty Stroup’s power breakout and the always consistent Erik Webb — was monstrous, the pitching — led by ace Mason Green — was deep and the fielding was some of the best in the tournament.

3. Tampa | Previous — No. 7: The Spartans make a big jump in the final rankings, and it is really because they showed us they are still who we know they are. The Spartans played a mere 20 games in the regular season, dropped their final series of the regular season to Florida Southern and then had more than a week of the season canceled to close things out. But then, in true Tampa style, the Spartans swept through the South Regional with victories over three top-25 teams, including two over top-seeded West Florida. They then won a pair in Cary before falling to Central Missouri in the rubber match. There’s a reason Tampa is always in the hunt, and there is no reason to think that doesn’t continue.

4. Angelo State | Previous — 2: The Rams had a terrific season from start to finish, ending the season in Cary with 44-9 season. Angelo State reached the semifinals — the furthest the program has ever made it — before running into the red-hot Wingate Bulldogs, falling in two memorable one-run ballgames. The Rams left Cary hitting .338, the best among the field. Josh Elvir ended his season once again with sensational numbers hitting .393 with a 1.247 OPS, 22 doubles, 13 home runs, 64 RBIs and 17 stolen bases.

5. Colorado Mesa | Previous — No. 3: Nope, the Mavericks didn’t make it to Cary. Yes, they sure did stay in the top 5. There is no way we are leaving this team out of the final Power 10. Colorado Mesa finished the season 42-7 with our first-ever NCAA.com player of the year in Haydn McGeary. There is nothing to be ashamed of if your final two losses are to Angelo State and West Texas A&M. This team hit .373 with a 1.118 OPS, 109 home runs and 612 runs scored, with their 12.5 runs per game second most in DII baseball history. Sure, they didn’t end in the final eight, but this roster was one of the best from start to finish.

6. Seton Hill| Previous — No. 10: Things didn’t go the way the Griffins wanted in Cary, but they did pick up a win before falling to Angelo State and the eventual national champion Bulldogs. Per Nick Herfordt at Perfect Game, Seton Hill was tied for the third-best RPI in DII baseball, and that speaks volumes for what it accomplished. Seton Hill balanced one of the strongest pitching staffs in DII — finishing third in ERA and second in WHIP — with Tommy Pellis and Derek Orndorff, who were two of the better hitters in the division from start to finish.

7. Southern New Hampshire | Previous — also considered: The Penmen entered the season as No. 23 in our preseason rankings and that was largely because head coach Scott Loiseau said he felt last year’s squad had the potential to be the best he ever had. With so much returning, it turned out he was right. Southern New Hampshire finished 28-9 playing against the fourth-toughest schedule in DII baseball. This team was just so balanced, hitting .309 with a .907 OPS while the pitching staff combined for a 3.31 ERA with a .205 batting average against.

8. West Florida | Previous — No. 4 : What a season for the Argonauts. This team checked off all the boxes. They played one of the toughest schedules in DII — the 31st strongest, to be precise — while capturing the Gulf South title and No. 1 seed in the South Regional. That included taking the last five games they played against Lee — a team highly ranked in the NCBWA poll all season long — and defeating a red-hot Delta State team in the best-of-three GSC championship series. Had they not run into Tampa, things may have been different, but we’ve said that for a lot of teams this century.

9. West Texas A&M | Previous — also considered: I dropped the Buffs to No. 11 in the final rankings before the tournament, but looking at the overall resume, that may have been a mistake. If you look at the same list from Herfordt, West Texas A&M finished with one of the best RPIs in DII while playing against one of the toughest schedules, posting a 34-9 record against teams with a .549 winning percentage. There was plenty of hitting — Keone Givens is one of the more exciting players in the division — and Mathieu Gauthier was a true DII ace. It’s tough when you have to go through Colorado Mesa and Angelo State in consecutive days to reach Cary, so you can’t hold that against the Buffs.

10. Northwest Nazarene | Previous — also considered: What a terrific season for the Nighthawks. They finished 35-10 and advanced to the finals — the first team from the GNAC to ever do so. They also were the first team to take down Colorado Mesa this season in the Courtyard Marriott Leadoff Weekend way back in February. I had Minnesota State in this 10th spot, but the fact that Northwest Nazarene made it to Cary and won a game before going home gives them the final boost.

Just missed — Trevecca Nazarene: I expect to take some heat not having Trevecca Nazarene in my final 10 since it made it to Cary, and I’m okay with that. But since the Trojans made it to the finals, they deserve a closer look. Braden Odom had a superb all-around season as did Trevecca Nazarene, who made its first NCAA tournament and rode the wave all the way to the final eight. The Trojans were just the second team in school history to advance to an NCAA final in any sport.

Before we sign off for the DII baseball season, there has to be a special shoutout to Erik Webb. The senior recorded a hit in every game in Cary and tallied four home runs, including this one that was the 100th hit at the USA Baseball National Training Complex since the tournament moved there in 2009 (a quick reminder: the tournament was played in Grand Prairie, Texas in 2017 and canceled last season).

Erik Webb hits the 100th home run in @NTCCary history. This one went 104 mph exit velo and put @Mules_Baseball up 3-1 and the end of 5. #D2BSB pic.twitter.com/tzH6Ypjvnm

So, why, in a season of so many outstanding performances, are we singling out Webb? The Central Region and MIAA player of the year in 2019 finished the 2021 season as the DII baseball active career leader in hits, runs, doubles, triples, home runs, RBIs and total bases. That places Webb in the top 10 in DII baseball history in runs scored with 256, doubles with 77, home runs with 65 and No. 1 all-time in total bases, surpassing Erskine’s Bryan Fogle’s mark of 630 set between 2007-10 and finishing with 640. And while they aren’t top-10 marks, a .355 career batting average and 1.125 career OPS are nothing to be ashamed of. Here’s a tip of the hat to, statistically speaking, one of the best to ever do it.