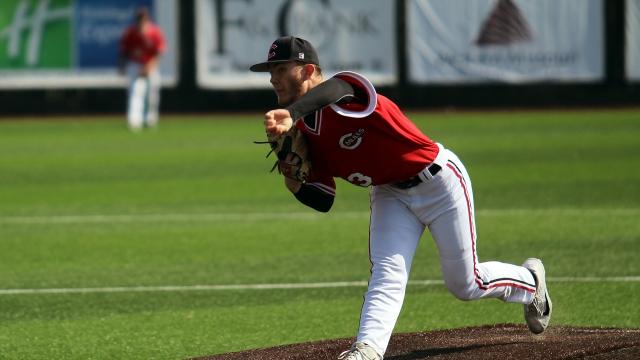 Central Missouri baseball is in the midst of an incredible run right now. After a “slow” 5-4 start for the Mules, they have reeled off 21 consecutive wins behind one of the best pitchers in DII baseball and a lineup of power bats that simply won’t relent. That keeps Central Missouri locked in the conversation for the best team in DII baseball, and we’ll take a look at where the Mules stand in this week’s updated Power 10 rankings.

There was also more DII spring football on the slate this past week. Notre Dame (OH) ended its brief season perfectly with an impressive victory over Charleston (WV) for the MEC championship. But more on that later.

Sit back, relax and get ready for this week’s DII Report.

Before we get to the new power rankings, let’s get you updated on some DII power pitchers. This past Thursday, we took a look at some of the pitchers you should keep an eye on down the stretch this DII baseball season — if you missed it, read it here. Quite a few of those pitchers didn’t let us down. In fact, some had monster weekends.

Now, did any of those arms impact the Power 10? Let’s take a look. Remember, these are my rankings. I look at the competition the teams have played, the talent on the rosters and win-loss records among a slew of other factors. Baseball is a long grind, so one loss doesn’t mean as much as it does in sports like football and basketball.

DII baseball Power 10 for the week of April 18

All games and stats through Saturday, April 17

1. Colorado Mesa | Previous: No. 1 — The Mavericks kick off a two-game series Sunday against Regis and were idle for this week. Sitting at 22-2 with a lineup hitting a combined .406 with a 1.201 OPS and 348 runs scored, we see little reason they should be bumped from the perch. Regis is 16-4, so putting up another sweep one week after sweeping then-No. 19 MSU Denver last week would show just how strong this team is.

2. Central Missouri | Previous: 2 — The Mules are on a tear and look more like 1B than No. 2. As we mentioned, ace Mason Green was dominant once again setting a career-high in strikeouts in a series-opening victory over Central Oklahoma. Game 2? The Mashin’ Mules rolled to a 15-2 victory, highlighted by three two-run home runs — one by Micah Evans, one by Erik Webb and one by Donovan Ditto — in the second inning.

3. Tampa | Previous: 3 — The defending champions look very Spartan-like, and that’s dangerous for DII baseball. Tampa got two more wins over Lynn this weekend to improve to 11-2. E.J. Cumbo extended his hitting streak to 11 games, with six multi-hit games along the way. On the bump, their 2.48 combined ERA is one of the best in all of DII baseball.

4. West Texas A&M | Previous: 6 — Last week the Buffaloes debuted at No. 6 and keep climbing this week. After a statement series victory over Angelo State, the Buffs picked up two more wins this week. Mathieu Gauthier was left off our pitchers to watch list, and he took it personally, improving to 9-2 by tossing seven shutout innings, scattering two hits with no walks and nine strikeouts. For that, we apologize. Gauthier and the Buffs are officially on watch.

It is important to point out that separating the remaining teams was nearly as tough as separating Colorado Mesa and Central Missouri at the top. It’s safe to say these teams have unfinished business from when play halted last season, and everyone is playing outstanding baseball. You may not agree with the way the next few teams roll out, but you will be hard-pressed to disagree that each deserves to be in the conversation.

5. Angelo State | Previous: 8 — After dropping their first weekend series of the year, the Rams bounced back sweeping Eastern New Mexico and scoring 39 runs over three games. Josh Elvir continues to be a beast at the plate, finding ways to score runs even when he’s not getting hits thanks to a .542 on-base percentage. We’ve already talked about Trent Baker, but don’t overlook Benjamin Elder who is now 6-1 with a 1.72 ERA and 1.17 WHIP on the season.

6. Augustana (SD) | Previous: 7 — Sure, the Vikings dropped a midweek game, but did go 3-1 on the week to get to 20-6 overall on the season. The team is hitting .333 overall with 44 home runs, already surpassing their 2019 mark of 35 in 33 less games. That continues to give the pitching staff newfound run support for one of the deeper rotations in DII.

7. Catawba | Previous: No. 10 — The Indians continue to roll, now winners of 10 in a row. They won a midweek showdown over then-No. 4 Mount Olive, getting to Trojans ace Hunter Stevens as well. Catawba is now 29-7 and is really clicking on all cylinders. Bryan Ketchie is in a groove, now 8-0 with his ERA lowering every start and Robbie Cowie has been solid in the back of the pen with seven saves. Hunter Shepherd is back to doing it all, hitting .437 with 10 home runs and 51 RBI with a 4-2 record behind a 3.93 ERA.

8. Lee | Previous: 9 — Lee dropped its first series of the season last weekend to top-25 Shorter, but bounced back on Saturday. It was impressive, as Logan Workman came out and allowed three runs in the first, but the Flames fought back to get head coach Mark Brew win No. 600. The Gulf South is a tough grind, but the Flames are equipped at the plate and on the mound to make a run for the title.

9. Mount Olive | Previous: 4 — The Trojans dropped two games in a row to start the week, the first to Catawba. This team is still a juggernaut, scoring 20 and 22 runs in two of its three wins to close out the weekend. I like how the entire offense can get runners in with five hitters with 30 or more RBI and the pitching staff, as always, will make things difficult to take a weekend series from the Trojans.

10 (tied). North Greenville and Minnesota State | Previous: 5 / First five out — North Greenville’s roller coaster ride the past couple of weekends continued, splitting a pair of doubleheaders with Belmont Abbey. The three-headed monster of Marek Chlup, John Michael Faile and Brady West in the heart of the lineup makes this team scary. Minnesota State had a big series with upstart Minnesota Crookston canceled, but swept a double header from Upper Iowa to get to 20-4 on the season. Joey Werner has been unbelievable at the plate, hitting .419 with a 1.195 OPS and team highs of 22 runs scored, six home runs, 29 RBIs and 11 stolen bases.

First five out (in alphabetical order)

Notre Dame (OH) rolled to the MEC championship on Saturday, defeating Charleston (WV), 51-34. The Falcons finish the season 5-0, scoring more than 50 points in four of their five victories. Quarterback Chris Brimm connected with receiver Devanaire Conliffe for 181 yards and three touchdowns, but Tabyus Taylor once again had a big day with 137 yards and a touchdown. Heading into 2019, yours truly predicted Virginia Union would be the surprise team because of Taylor, and while that didn’t pan out, he showed now just why I thought he was so special. In the abridged five-game season, Taylor rushed for an absurd 907 yards and 11 touchdowns.

More from DII football this weekend: