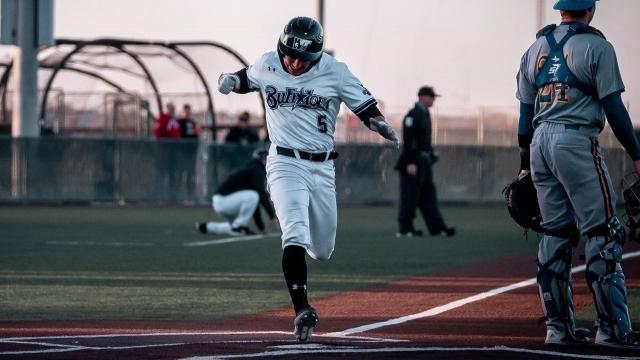 Welcome to the week of the underdog. There were several notable battles on both the DII baseball and DII football field this past weekend in which the lower-ranked teams prevailed. That led to a shakeup in our top-10 baseball rankings — including the debut of two new teams — and Tusculum’s first South Atlantic football title in over a decade.

STAY ON TOP OF DII NEWS: The NCAA.com DII hub

So, let’s get to it. Here are your new rankings and a complete DII football rundown in this week’s DII Report.

Like we said, there is quite the shakeup in this week’s rankings, although (SPOILER ALERT!) Colorado Mesa has firmly cemented its view from the top. There were big top-25 showdowns that not only resulted in some surprises, but led to a couple of debuts in the top 10.

Remember, these are my rankings. I look at the competition the teams have played, the talent on the rosters and then win-loss records, amongst a slew of other factors. Baseball is a long grind, so one loss doesn’t mean as much as it does in sports like football and basketball. Especially in an odd week when so many top teams lost.

DII baseball Power 10 for the Week of April 11
(all games and stats through Saturday, April 10)

1. Colorado Mesa | Previous: No. 1 — Andrew Morris threw seven shutout innings, striking out 15 batters in the Mavericks’ series-opening 15-3 win over MSU Denver on Friday night. That same MSU Denver team is ranked No. 19 nationally. The Mavericks then swept a doubleheader on Saturday. So yeah, Colorado Mesa is really good.

2. Central Missouri | Previous: 3 — The Mules have won 18 in a row, and are winning in impressive style with an offense that is clicking. Erik Webb is unconscious right now. The perennial player-of-the-year candidate is hitting .373 with a 1.198 OPS. He has 11 home runs, but perhaps what’s most impressive is that he has slugged one in six of his last seven games for the Mashin’ Mules.

3. Tampa | Previous: 4 — The Spartans didn’t get to play this past weekend, which is a shame because Barry would have been their third big test in a row. Still, Tampa is 9-2 with key series wins over Florida Tech and then Nova Southeastern. Tampa’s pitching staff has a combined 2.37 ERA and Coach Urso has another beast brewing in Florida.

4. Mount Olive | Previous: 6 — The Trojans keep winning, so they keep climbing. This week, Mount Olive put up a 17-2 victory over Virginia State to improve to 25-6. The starting pitching has been sensational, no matter who head coach Rob Watt has thrown in there, but Hunter Stevens and Reed Parris are one of the best combos in DII right now.  A big mid-week showdown with Catawba awaits Tuesday.

5. North Greenville | Previous: 8 — The Crusaders’ rollercoaster ride in the top 10 continues, as they bounce back with a 2-0 week that gets them to 23-6. This roster is loaded in talent. Marek Chlup was one of our 9 hottest hitters in DII baseball  this past week and John Michael Faile is putting up another All-American campaign. Suddenly, this has become one of the toughest regions in all of baseball, so the Crusaders have their work cut out to stay atop the rankings.

6. West Texas A&M | Previous: First five out — Welcome to the top 10, Buffs. And they do so in impressive fashion, taking the first two games against then-No. 2 Angelo State. Matthieu Gauthier improved to 8-2, going seven strong, allowing no earned runs and striking out seven in a dual of DII aces to open the series. Meanwhile, the Buffs’ lineup got Trent Baker out of the game in 3.1 innings, giving up the most runs he has since last February. The Buffs are clicking everywhere right now.

7. Augustana (SD) | Previous: First five out — Man, the NSIC is playing some fun baseball right now, and the Vikings are clicking. A 3-1 week gets them to 16-5 on the season and it has been behind some torrid hitting and good starting pitching. On the bump, Tanner Brown and Ryan Jares have been very good, but this lineup? In 2018 and 2019, the Vikings averaged 36 home runs per season. They are already at 35 roughly at the halfway point.

8. Angelo State | Previous: 2 — I just can’t bump the Rams out of the top 10 with the depth of talent on this squad. It’s not like they lost to an unranked team, they struggled against a club that has lost three times all season. Trent Baker is still one of DII’s premier aces, and Josh Elvir’s bat is amongst the very best in the land. It will be important to see how they respond after their first series loss of the season.

9. Lee | Previous: 5 — I’m still on the Flames train despite a 1-2 week against Shorter. But let’s face it, Shorter may be the best team no one is talking about in DII baseball. I still think a rotation headed by Logan Workman and a lineup with sluggers like Ryan Beamish and Landon Silver (who have a combined 24 home runs) stick in the top 10 for now. As with Angelo State, we’ll see how they rebound.

10. Catawba | Previous: No. 10 — Catawba went 1-1 against a Wingate team that is handling ranked competition very well in 2021. Bryan Ketchie continues to be the veteran presence on the mound, now 6-0 with a 2.06 ERA and Hunter Shepherd’s bat is as good as any in DII. That big midweek showdown with Mount Olive could help the Indians rise.

First five out (in alphabetical order)
It was tough to separate the bottom few rankings and the first five out, as many of our top teams put up more losses than wins this week. It was a very narrow margin that kept these teams out of the top 10. Sunday or early-week victories can change things very quickly.

Tusculum wins first SAC title since 2008: If you’re wondering how good quarterback Rogan Wells has been, consider this. A year ago, the Pioneers — sans Wells — were 5-6. Now that Wells is here, they went 4-1 and defeated Lenoir-Rhyne, the team I had as my preseason No. 2, for the SAC championship, 28-23.

Wells continued his hot streak, throwing for 438 yards and three touchdowns. It was his third-straight game with 400-plus yards and he finishes the condensed five-game spring slate with 1852 yards — a ridiculous 370.4 yards per game. And per usual, Wells was extremely efficient, completing 62 percent of his passes this season.

The veteran DII quarterback pulled a Tom Brady. While he was in a position to win in Valdosta State with speedy, reliable receivers and a backfield stable with good hands, he showed this year it’s not just about what’s around him. That said, Tory Ponder and Justice Parham certainly helped the cause on Saturday, combining for 13 receptions and 237 yards.

Ohio Dominican stays perfect in a battle of undefeated teams: Findlay and Ohio Dominican rolled into Saturday’s game each a perfect 3-0. Findlay, a team considered in the preseason top 25, came into the game as an offensive steamroller, averaging 44.6 points per game in its three wins.

The Panthers took down Findlay, 14-10, despite being held to just 192 total yards by the Oilers’ defense. A rainy day made it hard to get anything going for either team, but the Panthers jumped out to a 14-0 lead at the half and were able to hold on. Next for the Panthers? The 4-0 Tiffin Dragons, who are coming off a 21-0 victory and have allowed just 14 points in the past three weeks.