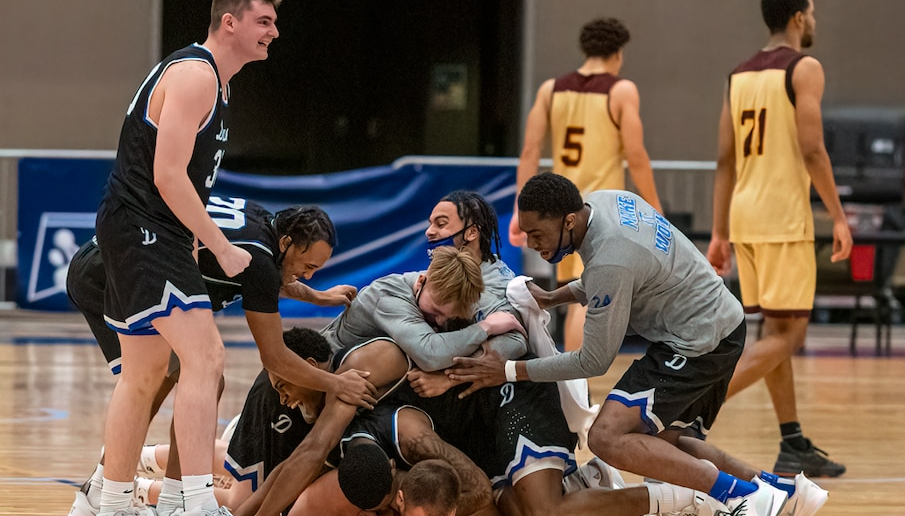 DII Report: 5 matchups you won't want to miss in the DII Elite Eight

The ball was tipped. And here we are. Just eight teams remain in each of the DII men’s and women’s basketball tournaments. By the time we meet again next week in the DII Report, we’ll have two new national champions.

The DII Elite Eight kicks off this week, the men from Indiana and the women from Ohio. Be sure to get caught up on all the action so far, plus every thrilling second from the DII Elite Eight in our live blogs here: FOLLOW THE TOURNEYS: Men’s | Women’s

There are other sports being played that we’ll need to check in on, as well as the DII swimming and diving championships from Birmingham, Alabama (you can recap that action here). So take a break from the Madness and get caught up in this week’s DII Report.

Let’s face reality. Every game is going to be a good one at this point. But there are some player matchups and team matchups that you should make sure you don’t miss. Luckily, you won’t have to: you can stream every game of the quarter and semifinals right here at NCAA.com.

This was one of the matchups we hoped to see in the preseason. The Hilltoppers offense averages 102 points per game, and Dalton Bolon and Pat Robinson contribute 42 of those points a night. I would argue that few are as good as the Bearcats in forcing teams to play at Northwest’s tempo.  Just look at what they did to a very good Washburn team that was the only team to beat them this year. It will be interesting to see which dictates the outcome of the game: the poise and experience of the Bearcats or the high-octane scoring machine that the Hilltoppers are.

2. Drury vs. Charleston (WV) — Noon ET on Tuesday, March 23
Drury is Elite Eight regulars. Charleston hasn’t been here in 15 years. Not only is this the Golden Eagles first time to the DII Women’s Elite Eight since 2006, they are the first Mountain East Conference team to make it… ever. This team is really, really good. They average 81.9 per night and allow just 64.8, including holding Glenville State — a team that led DII averaging 98.4 points per game — under 87 points in all three matchups. Brooklyn Pannell was second in DII in scoring and Erykah Russell averaged a double-double as one of DII’s most productive duos.

And then there are the Panthers. You know, the team that has lost two games in the past three seasons? This team is equally balanced, scoring 84.6 and allowing 63.5 points per game. Three players score in double figures and pull down at least four rebounds per game, so once again Drury has a deep team. Paige Robinson is the star, leading the team in scoring, steals and assists. But how about those steals? Drury has 293 this season, with six players recording 31 or more. Like I said, another deep team.

3. Andrew Sischo vs. West Texas A&M’s dangerous duo — 3:45 p.m. ET on Wednesday, March 24
I’m not taking anything away from the rest of Daemen’s lineup or West Texas A&M’s supporting cast. But simply put, Andrew Sischo, Joel Murray and Qua Grant are three of the best players in DII men’s basketball for three years running. Having all three on the same court is going to be fun. 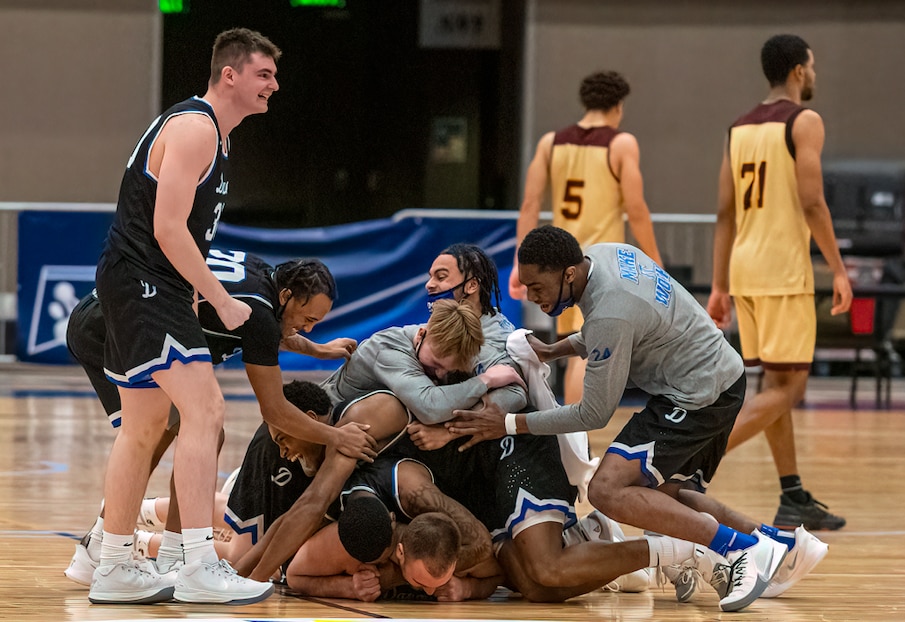 Teammates join Andrew Sischo at half court after Daemen wins the East Region.

Perhaps nothing was more compelling than Sischo falling to the floor all by himself as Daemen rushed the court in its thrilling victory over rival St. Thomas Aquinas. The Daemen Wildcats are very much who they are because of Sischo. He’s averaged 21.3 points and 10.5 rebounds in his career and has made Daemen part of the national conversation the past three seasons. With a game-high of 25 points and 13 rebounds, Sischo and Daemen are finding their way to the DII Elite Eight.

For Murray and Grant, it’s business as usual. The two led West Texas A&M to the last DII Elite Eight played as freshmen, and earned the No. 1 seed in the South Central last year when play was halted. This season, the Buffs look like an unstoppable force, easily winning both games to earn yet another Elite Eight birth. Together, Murray and Grant are responsible for 46 points and 15 rebounds per game with 73 steals in the Buffs fast-paced attack.

4. Lander vs. Azusa Pacific —  2:45 p.m. ET on Tuesday, March 23
We know Lander has been great all year, but more on the Bearcats in a second. First, let’s take a look at Azusa Pacific.

Three teams return to the DII Women’s Elite Eight from the previous one played: the Drury Panthers, Lubbock Christian and these Azusa Pacific Cougars. But it wasn’t these Cougars per se, as only one starter returns from that team. Azusa came out of the gates slowly, losing three in a row and kind of falling off the radar until finding another gear in the West Region bracket. Now, the Cougars are rolling, with five starters averaging double figures.

Opposite them is Lander. The Bearcats have lost just one game this season and it was to a sensational North Georgia team by a mere two points. The same North Georgia team they also beat twice this season, including a dominant and impressive 19-point victory in the South Region finals. Zamiya Passmore — who leads the team in scoring — and Makaila Cange — who averages a double-double — make this a very intriguing matchup.

5. Colorado School of Mines defense against Lincoln Memorial’s offense — 1 p.m. ET on Wednesday, March 24
Both of these teams are deep and loaded with experience, so there is no advantage there. Both play different styles of basketball, and that could make for one of the more interesting matchups in the round of eight.

The Mines finished third in DII, allowing a mere 60.5 points per game. Lincoln Memorial averaged the fifth-most points per game, scoring 92.8. The Railsplitters also led DII in margin of victory, blowing out opponents by 22.8 points per game. Now, Lincoln Memorial closed out the regular season on low note, having to cancel five games and going 1-2 before foregoing the SAC tournament as well. They returned unscathed by the layoff, utterly dominating their way to the Elite Eight. Mines smothering defense was the story to its West Region victory, holding both opponents to just 52 points. It will be fun to watch which team’s style prevails.

Diamonds in the rough: Around the DII baseball horn

Let’s take a look around DII baseball at just a few of the standout performances. There were some Kings of the K on display this past week in DII baseball.

But let’s not forget the hitting performances either.

A look at the WALK OFF GRAND SLAM! pic.twitter.com/6dEelIKHkW

Mount Olive got the best of North Greenville on Saturday in a matchup of two of our preseason top-10 teams. The Trojans swept the double-header with ace Hunter Stevens improving to — you guessed it — 5-0 to close it out. The two powerhouses meet Sunday in another double-header.

How about Seton Hill? Not only are the Griffins a perfect 7-0, they have beat some stiff competition to do so. Last weekend it was a 13-6 victory over top-25 Millersville. This weekend, they took the first game from Ashland on Saturday. Through seven games, the Griffins’ top-three hitters — Tommy Pellis, Derek Orndorff and Jack Oberdorf — are hitting .438 with seven home runs and 26 RBI. Not too shabby.

DII football by the numbers

Here’s a quick look at some impressive numbers from the past weekend’s spring football schedule.

3 — Rushing touchdowns by Ken Avent in Catawba’s loss to Newberry. Avent piled up 112 yards and those three scores to account for all of the Indians scoring in the 28-21 loss to the Wolves. His counterpart — Newberry’s Mario Anderson — ran for 111 yards and a touchdown himself.

4 — Seconds remaining on the clock when Limestone’s Jerko’ya Patton punched in the game-winning touchdown. It was the senior’s second score of the day to go along with a career-high 151 yards.

4-0 — Texas-Permian Basin continued its best start in program history with a 17-2 victory over Texas A&M-Kingsville. MJ Link had five receptions for 156 yards and two scores to lead the way.

138 — Yards rushing by Tabyus Taylor. Notre Dame (OH) has a new head coach and new star running back in Taylor, but seem to pump out the same results. Taylor led the way a second week in a row, adding two touchdowns as the Falcons improved to 2-0.

151 — Total yards Ohio Dominican held Walsh to in a 17-0 victory. The Panthers allowed just eight first downs, including none on the ground and a mere 29 net yards rushing.

200 — Total yards for Gannon’s Melvin Banks despite a loss to Davenport. Banks ran for 142 yards while pulling in a 58-yard catch. He also scored a touchdown on the day.

510 — Total yards by Lenoir-Rhyne as the Bears improved to 2-0 in a 44-13 victory. Grayson Willingham was back under center throwing for 309 yards and two TD as Deondre Lester reeled in eight receptions for 144 of those yards and one of the touchdowns. Freshmen Dwayne McGee had another impressive performance, rushing for 192 yards and three scores.