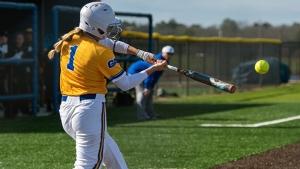 
What a wild week in DII college softball. Rollins and Texas-Tyler remain perfect on the season and continue their climb up the Power 10 while last week’s No. 1, Young Harris, struggled for the first time all season. That led to a new No. 1 and a complete shakeup in this week’s rankings.

Before we jump in, let’s remember: These are my top-10 rankings, put together using much of the same criteria the selection committee uses for the DII softball championship tournament. As we move forward I’ll look at strength of schedule, head-to-head matchups and records against DII ranked opponents amongst other criteria.

Let’s break down the latest Power 10 of the 2020 DII softball season.

The DII softball Power 10: Week 5 (all games and stats through Sunday, March 1)

No. 1 Southern Arkansas | 18-2 | Previous: 3
I know, you’re thinking: how is a two-loss team ranked ahead of an undefeated team? Southern Arkansas has some big victories under its belt and is a proven power, with stress on power. The Muleriders lead DII softball in home runs with 29 which has led to an absurd 188 runs scored, also most in DII. Head coach Jason Anderson always has the Muleriders as a scary bunch and the 2020 version is no different.

No. 2 Texas-Tyler | 16-0 | Previous: 9
A 6-0 week is good by any means. A 6-0 week that includes sweeping No. 16 Texas A&M-Commerce is great. The Patriots continue to roll through DII at an impressive rate, now taking down three nationally-ranked opponents, so far. Get to know the name Serena Saldivar who is hitting .438 with seven home runs to pace this offense.

No. 3 Rollins |17-0 | Previous: 4
Rollins makes its third-straight jump in the DII softball rankings and remain one of three undefeated teams in DII softball, an impressive feat over four weeks of play. The Spring Games started Monday for Rollins and the Tars picked up a pair of wins over a good Wilmington (DE) team. Chelsea Peace paces the offense leading the team in doubles (four), home runs (seven) and RBIs (20).

No. 4 Augustana (SD) | 8-2 | Previous: 2
The Vikings had their second week off in a row, but I still have plenty of faith that the defending champs will pick up exactly where they left off. They resume with five-straight days of double-headers in Clermont, Florida at the Spring Games, so we’ll definitely find out if I’m right this weekend.

No. 5 Chico State| 16-1 | Previous: 7
The Wildcats have won seven in a row, sweeping their four-game weekend series without allowing a single run. Sam Mulock and Brooke Larsen continue to be unfair to opposing lineups allowing just 11 earned runs in 106 innings pitched thus far. The bats are coming alive as well as Kristin Worley, Drew Rodriguez and Alani Nguyen are all hitting .400.

PLAYER OF THE YEAR WATCHLIST: NFCA’s 50 to watch

No. 6 Concordia (CA) | 12-2 | Previous: 10
The West is going to be fun to watch with three teams in the Power 10 right now. The Eagles went 4-1 after a rainy weekend and picked up a win in Monday’s makeup game. Callie Nunes is such a force in the circle it will be tough to take any weekend series from Concordia, now with a 1.02 ERA and 0.92 WHIP. This team is dependent on producing runs, not living by the long ball, so Nunes’ hot start will have to continue if the Eagles want to contend.

No. 7 North Georgia | 19-4 | Previous: 5
The Nighthawks had a modest 3-2 week, but that included winning a series from former Power 10-er Lincoln Memorial over the weekend. Of their four losses, three have come by one run while the fourth needed to go to extra innings to decide. Simply put, North Georgia is one hit or play away from being perfect on the season, and that’s impressive. We know the big story here and it’s in the circle with Kylee Smith and her absurd 0.18 ERA through 13 starts.

No. 8 UC San Diego | 18-7 | Previous: 6
A rather average week for the Tritons saw them go 2-2 but I still think there is a lot to like about this team. They’ll certainly have their hands full this weekend when Team USA comes to town for an exhibition. UCSD simply has shown good balance thus far with a combined 1.80 ERA in the circle and a .304 batting average at the plate.

DII SOFTBALL HISTORY: Programs with the most titles | Complete list of winners

No. 9 Young Harris | 13-3 | Previous: 1
One week after reaching No. 1 for the first time this season, Young Harris headed to the Lenoir-Rhyne weekend tournament and struggled. The Mountain Lions finished the weekend 1-3, splitting their two games with No. 20 Lenoir-Rhyne. Every team has a bad weekend, and there is still plenty to like in this team. Overall, they are hitting .318 while Sara King (3-1, 2.60 ERA) continues to impress in her Young Harris debut.

No. 10 St. Anselm | 9-1 | Previous: NR
Welcome the Hawks to the Power 10 mix. Saint Anselm opened the season two weeks ago a perfect 6-0 and reeled off three more in a row before finally dropping their first game to Findlay. The Hawks opened this week with a win over Grand Valley State as well, so they are still going strong. Morgan Perry has been sensational in the circle, a perfect 7-0 in seven starts with 10.28 strikeouts-per-seven and a 0.74 ERA.