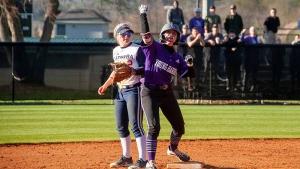 
The DII softball season is officially rolling now that every team has finally played some games. Young Harris is still perfect and that helps earn the Mountain Lions the top spot for the first time all season.

The first few Power 10 rankings were based heavily on preseason assessment and not so much on the winning and losing. With some teams only having a couple of games under their belt — or none at all — and others having played in multiple tournaments, it was an unlevel playing field. Now that we are a month in, we can better assess the here and now — and that led to quite the shakeup in the latest Power 10.

How do the DII softball Power 10 rankings work? These are my top-10 rankings, put together using much of the same criteria the selection committee uses for the DII softball championship tournament. As we move forward I’ll look at strength of schedule, head-to-head matchups and records against DII ranked opponents amongst other criteria.

Let’s break down the latest Power 10 of the 2020 DII softball season.

No. 1 Young Harris | 12-0 | Previous: 2
It has been quite the start for the Mountain Lions who are looking better than last year’s squad that made the final eight. This week, Young Harris hosted their own tournament and opened with an 8-3 victory over red-hot No. 19 Trevecca Nazarene and closed the week with two more Ws. Obviously, when you’re winning like this, everything is clicking, but the pitching has been impressive, combining for a 2.16 ERA thus far.

No. 2 Augustana (SD) | 8-2 | Previous: 1
Augustana didn’t play this week, so I’m not going to punish them with too big a fall. Ashley Mickschl is a special talent in the circle atop the rotation and Abbie Lund and Christina Pickett are hitting everything that comes their way. The Vikings don’t return to action until the Spring Games in Clermont, Florida on March 7, but will play 10 games in five days.

No. 3 Southern Arkansas | 14-2 | Previous: 6
The Muleriders continued their climb up the rankings with their second-straight 4-0 weekend. This weekend Southern Arkansas pounded Harding by a score of 27-3 in the four-game sweep. The offense is clicking as always, now hitting a combined .363 with 21 home runs, the second-most in DII softball. But Sydney Wader, Victoria Taylor and Elisa Favela have proven to be a real strength in the circle and this team looks solid all around.

No. 4 Rollins |14-0 | Previous: 8
The Tars make a huge jump one week after their 2020 Power 10 debut, one of 11 remaining DII softball teams through Feb. 23 games. And of all those undefeated teams, Rollins has the most wins. Now, Rollins hasn’t played as tough a schedule as some other teams, but they have more than handled the opposition, outscoring their foes 82-9. Ashley Worrell and Ali Shenefield have combined for all 14 starts and a 0.67 ERA and a .149 batting average against.

No. 5 North Georgia | 16-2 | Previous: 4
It’s a tough week for the Nighthawks when they go 5-1 and drop a spot in the rankings, but that’s to no fault of their own. North Georgia just keeps winning and four of this week’s wins came in shutout fashion. Kylee Smith is so good in the circle it’s almost comical: she now has a 0.12 ERA and 0.47 WHIP through 10 starts with seven shutouts and 109 strikeouts through her first 60 innings pitched.

PLAYER OF THE YEAR WATCHLIST: NFCA’s 50 to watch

No. 6 UC San Diego | 16-5 | Previous: 5
Yes indeed, I’m still higher on the Tritons train than most, but there is plenty to like about this 16-win team. After a big 5-1 week, the pitching staff now has a combined 1.60 ERA and 1.09 WHIP with Robyn Wampler and Alanna Phillips a dangerous two-headed monster in the circle. The Tritons offense may lull you to sleep with a death by singles approach — just 23 percent of their hits have gone for extra bases — but it works: UCSD has scored 105 runs thus far, 16th-best in DII.

No. 7 Chico State| 12-1 | Previous: 7
This ranking sure makes the California Collegiate Athletic Association proud with back-to-back selections in the top 10. The Wildcats returned to action this past weekend and after dropping their first loss of the season — a one-run loss by the way — in the opener, they exploded for 32 runs over the next three games to take the series. This team is paced by its pitching and Sam Mulock and Brooke Larsen are two good ones, having allowed just 11 earned runs in their first 83 innings pitched.

DII SOFTBALL HISTORY: Programs with the most titles | Complete list of winners

No. 8 Lincoln Memorial | 11-1 | Previous: 10
The Railsplitters jump a spot after a 2-0 weekend. Unfortunately a Tuesday double-header with Young Harris was postponed and we couldn’t get to see what this Lincoln Memorial team can really do, but the results thus far have been impressive. Ty-Kella Goins, Emma Webb and Sierra Hucklebee are all hitting over .400 a month into the season and Bailey Griffith is looking like a true ace in the circle.

No. 9 Texas-Tyler | 10-0 | Previous: NR
Welcome to DII softball, Patriots. UT Tyler is transitioning to DII and is sending an early warning by remaining perfect four weeks into the season. The Patriots even have two wins against nationally-ranked opponents on their early resume, taking down Arkansas Tech 17-15 and Southern Arkansas 11-8 in extras two weekends ago. This team is all about scoring runs right now — Serena Saldiver is off to a huge start hitting .516 with five home runs — so we will see how this pitching staff adapts to the muscle of the Lone Star Conference.

No. 10 Concordia (CA) | 8-1 | Previous: NR
The Eagles took two from Azusa Pacific this weekend and have now reeled off six wins in a row. Concordia was in my preseason and Week 1 top 10 based on the strength of returners, every single one from last year’s deep DII NCAA tournament run as a matter of fact. Now they are back in the mix as they head to Hawaii for an eight-game swing.