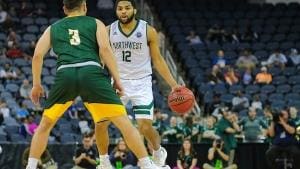 
The 2019-20 DII men’s basketball season begins Nov. 1 in St. Joseph, Missouri and opening day will be similar to the way the 2018-19 season ended: Northwest Missouri State looking to extend its winning streak, now at 38 games.

While the official start of the DII men’s basketball season begins the weekend of Nov. 8 through 10 with crossover challenges between conferences and regions, Northwest Missouri State and seven other teams get the season rolling first Nov. 1 in the Small College Basketball Hall of Fame Classic tournament.

The event began in 2016 and has featured some of the best DII men’s basketball has to offer. Northwest Missouri State began its season there last year with two wins.

The Bearcats haven’t lost since.

PLAYER OF THE YEAR WATCHLIST: Here’s who we think are DII POY contenders

Freshman Trevor Hudgins was the MVP of last year’s tournament, and would later win the Most Outstanding Player honors when the Bearcats completed their 38-0 season — the fifth undefeated season in DII history — in Evansville, Indiana, hoisting their second national championship trophy in three years.

The schedule for the SCB Hall of Fame Classic looks like this (all times Eastern):

The Disney DII Tip-Off Classic also gets underway Friday in Orange, California. Concordia (Ca) will play Texas-Permian Basin at 6:15 p.m. and 2018 national champion Ferris State takes on Wayne State (Neb.) at 8:30 p.m. The four teams will mix it up and play two more on Saturday.

DII also continues its exhibition matchups against DI foes this weekend. Some of the bigger matchups see Chico State take on No. 21 Arizona, Kentucky State at No. 2 Kentucky, and Winston-Salem State at No. 9 North Carolina. You can follow all the DII vs. DI action this season in the link below:

Track every DII vs. DI exhibition game from the 2019-20 season

The majority of DII basketball gets rolling the following weekend as conferences and regional teams clash in early-season crossover showdowns. Here’s a look at when some of the teams who finished in the 2019 rankings begin their season.

(Note: At publication not all DII men’s basketball teams had announced their schedules. We will update with the appropriate dates when those schedules are released.)