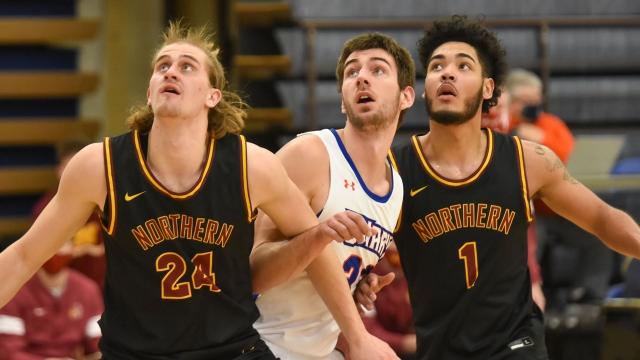 The top five of this week’s NABC poll is identical to the last. But there were four newcomers in the top 25, along with several teams that continued to drop.

We’ve got takeaways and analysis from the rankings. But first, the poll itself:

For the second week in a row, there were no changes to the top five in the latest NABC poll.

No. 1 Colorado School of Mines has been idle since Feb. 1, when it defeated Regis, 84-52. The Orediggers’ next four games were postponed. They’re scheduled to return on Friday, Feb. 12, at Fort Lewis.

The second-ranked Northern State Wolves wrapped up their road schedule with a two-game sweep of Mary over the weekend. Their remaining four games are all at home, and they finished a perfect 8-0 away from Aberdeen, S.D.

Finally, the fifth-ranked Buffaloes ended a 19-day layoff by sweeping Angelo State in a home-and-home series over the weekend. West Texas A&M will host Western New Mexico at 3:30 today.

THE DII REPORT: Latest men’s basketball Power 10 rankings and the return of college baseball and softball

In last week’s poll, Texas A&M-Kingsville rose from No. 22 to No. 14. The Javelinas improved once again, this time ascending one spot to No. 13. They’ve now won 11 straight and haven’t lost since Dec. 18.

Meanwhile, Findlay is going in the opposite direction. The Oilers dropped six spots from No. 6 to No. 12 after suffering consecutive losses for the first time this season. They fell to then-No. 12 Hillsdale, 82-71, on Saturday, and were upset last night by Cedarville, 90-84, in overtime.

Last week, then-No. 20 Valdosta State split a two-game series against Montevallo. The Blazers are 2-2 in their last four contests. It was just two weeks ago when they were ranked No. 16. But they’ve fallen once again, this time to No. 25.

There were four newcomers in this week’s top 25.

The Golden Knights began their season in early January and won all four games that month. They’ll return to the floor tomorrow night at Clarion.