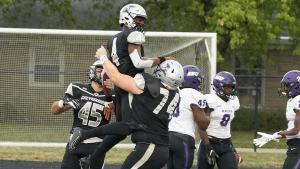 
Bowie State and Virginia Union clash in a top 25 matchup in Week 8 of the DII football season. Here is where you can find the complete schedule, rankings, top games previewed and how to watch this week’s DII football showcase.

THE TOP 25: How four upsets reshaped the latest DII rankings

Two Gulf South Conference teams that began the year in the top 25 square off Saturday afternoon. While the year hasn’t gone as anticipated for either team, there should be plenty to watch. West Georgia running back Chauncey Williams — one of our impact freshmen for 2019 — is second in the GSC in rushing with 552 yards and nine touchdowns. Jack McDaniels leads the GSC in passing with 1,573 yards for West Alabama so there could be offense a-plenty in this one.

Notre Dame (OH) should be in for a battle in a non-conference matchup with Findlay. The Oilers are 5-2 and have a potent rushing attack that’s tough to maintain. Of course, the Falcons know a thing or two about rushing the football, with Jaleel McLaughlin leading DII football in total rushing yards in 2019.

With Virginia Union entering the poll, we get a top-25 showdown with big CIAA implications. The Panthers travel to Bowie State and a win would shift the tide in the conference.

Bowie State is as balanced a football team that the CIAA has to offer. The Bulldogs are currently second in scoring offense, putting up 38.1 points per game while limiting teams to just 15 points per game, tops in the conference. But Virginia Union isn’t far behind, scoring 34.7 and allowing 16.1 points per contest. Panthers quarterback Khalid Morris and his top target Charles Hall are the most explosive QB-WR duo in the CIAA, but the defense will have to try and solve Bulldogs quarterback Ja’Rome Johnson, a dangerous dual-threat player.

TRACK THE UNDEFEATED TEAMS: All 14 perfect teams, and who they have left

West Chester will have to find a way to bounce back against a 5-2 East Stroudsburg team. The problem for the Golden Rams is that the Warriors have lost those two games in consecutive weeks and will be looking to make a statement against a top 25 foe.

Pittsburg State will look to get right back into the top 25 mix. The Gorillas have the chance to rebound quickly with a game against No. 11 Central Missouri. It will complete one of the toughest stretches any team has had to endure in 2019, going from Northwest Missouri State to Fort Hays State and now the red-hot Mules.

UIndy is back in action after a bye week and begins its first of three games against opponents with winning records. Missouri S&T is the first of the bunch, two games removed from a big Week 6 win over FCS Texas Southern.

Keep your eyes on these players Saturday, and be sure to check back at NCAA.com every Sunday for a rundown of the best statistical performances from the weekend.