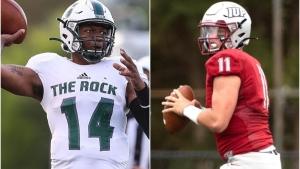 
No. 7 Northwest Missouri State and No. 9 Slippery Rock prevailed in big top 25 matchups in Week 6 of the DII football season. Here’s where you can find the complete top-25 rankings, schedule, top games and links to watch the DII football showcase.

DII FOOTBALL RANKINGS: What we know about the top 25 after five weeks

(Italics = DII football showcase game on ESPN 3 | No. 25 West Florida is on bye)

WHAT WE SAID: A top-25 showdown heads to the big stage of Arrowhead Stadium in this matchup of two MIAA rivals. This one features Northwest Missouri State’s potent offense — second-best in the MIAA — against Pittsburg State’s defense, which is tops in yards allowed and scoring in the conference. The Bearcats quarterback Braden Wright is coming off one of the worst week’s of his exciting young career and will be looking to show off his versatility against this tough Gorillas D. The last time these two met at Arrowhead in 2013, both teams were also undefeated — that time 6-0 — when the Bearcats won 24-15.

WHAT WE SAID: There’s a lot at stake in this PSAC showdown, as the winner gets a leg up in the PSAC West Division. Both teams are undefeated and the winner will have that much a better shot at playing in the PSAC Championship game Nov. 16. This is a showdown between two great quarterbacks: The Rock’s Roland Rivers III is averaging 381.2 yards per game with 27 total touchdowns and just two turnovers while Quinton Maxwell is breaking out for IUP and gelling with dynamic back Duane Brown.

WHAT WE SAID: The Lakers suffered a heartbreaker last week on a last-second Hail Mary to Ashland, but Grand Valley State has never been a team to stay down too long. Up next is the Battle of the Valleys, as Saginaw Valley State visits Allendale, Michigan. Grand Valley State has dominated the series of late winning the last seven in a row and 15 of the last 16. But this is a much different Cardinals team, just two weeks removed from a top-25 appearance, and will look to make a statement against the GLIAC’s top defense under the lights at Lubbers Stadium.

WHAT WE SAID: It’s the 18th rendition of the Miner’s Cup, the annual showdown between the Northern Michigan Wildcats and Michigan Tech Huskies. The Miner’s Cup came about in 2002 and is made from an authentic miner’s helmet found in a local antique shop. Michigan Tech, off to a 2-2 start, has dominated over the past decade, entering Saturday’s action the winners of nine-straight Miner’s Cup contests.

WHAT WE SAID: The Mustangs are stuck in a two-game slide, dropping from the top 25 on the heels of those back-to-back losses. It’s certainly not for the lack of talent, as Midwestern State has two studs on offense. Running back Quinton Childs has three games in which he’s run for 135 or more yards while wide receiver Xavier Land has broken the century mark in consecutive games. The Mustangs problem of late has been getting the ball in the end zone, averaging just 12.7 points per game over their last three.

The Lions are 4-1 this season, looking to keep pace atop a tough Lone Star Conference. Texas A&M-Commerce’s lone loss was on the road in Pueblo, Colorado, against a top-25 team at one of the toughest places to play in DII football, and only lost by one score. Miklo Smalls is the man to watch under center, throwing for over 900 yards and eight touchdowns this year to a trio of reliable receivers in Chance Cooper, Ryan Stokes and Jeremiah Bridges (although Bridges has missed two games). This should be a good old-fashioned Lone Star showdown with plenty on the line for both teams.

The list for player-of-the-year candidates is starting to take shape. Last weekend, I spoke on the DII football showcase about potential candidates separating themselves in the Harlon Hill Award race. Keep your eyes on these players this week, and be sure to check back at NCAA.com every Sunday for a rundown of the best statistical performances from the weekend.